The Supreme Court (SC) disposed of the development funds case on Thursday following Prime Minister Imran Khan’s denial of news reports citing him as announcing allocation of Rs500 million to all lawmakers ahead of the Senate polls.

The petition was being heard by a five-judge larger bench headed by Chief Justice of Pakistan Gulzar Ahmed.

The decision came as the Ministry of Finance submitted a signed undertaking of the premier, denying such an action being taken by him.

“The finance division has not allocated or handed over monies to any legislature or any person nor has it intended to do so. There is no such provision in the public finance management system,” the undertaking read.

“The finance division has not received any direction or request from any quarter to allocate these funds or any other funds to any specific project or any project identified by a legislature or any other person,” it further added.

Attorney General for Pakistan (AGP) Khalid Javed Khan also informed the SC that the premier denied the news of giving development funds to the members of the assembly.

However, Justice Qazi Faez Isa observed that hefty funds had been released to the government coalition in NA-65. “Can funds be given to certain constituencies for road construction?” he questioned.

“We are not the enemy, we are the protectors of the people's money and the constitution,” he stated.

While talking about measures to curb corruption in the country Justice Isa said: “Is it not the responsibility of the Election Commission to take action against corrupt practices?”

He added that it is unknown at this time if there is any constitutional cover to the PM on his political actions. However, in the past courts have been known to summon prime ministers, Justice Isa observed.

The top court judge stated that the premier had criticised the five-year term for the government as being too short, adding that "if he wished to take up the matter then he should approach the assembly for an extension".

Speaking on the occasion, the CJP also observed that the courts are not there to control the prime minister’s office, while questioning the authenticity of the documents for the funds case.

A day ago, the SC had sought the federal government's written undertaking, signed by the prime minister, that development funds would not be given to any lawmaker in violation of the Constitution.

Attorney General for Pakistan (AGP) Khalid Javed Khan had submitted a report signed by the Principal Secretary to PM Azam Khan that no fund will be given to any lawmaker in violation of the SC judgment.

This came after the two-judge bench, comprising Justice Isa and Justice Baqar, took notice of a news report and an editorial published respectively on January 28 and February 1 in a newspaper about the development grants.

The court directed its office to issue notices to the federal government through the cabinet secretary or principal secretary to the prime minister, secretary for finance ministry and all provincial governments through their respective chief secretaries and secretary finances.

The bench asked them to submit their respective responses and replies with regard to the PM’s alleged announcement. The court also issued notices to the AGP Khalid Javed Khan and all provincial advocate generals. 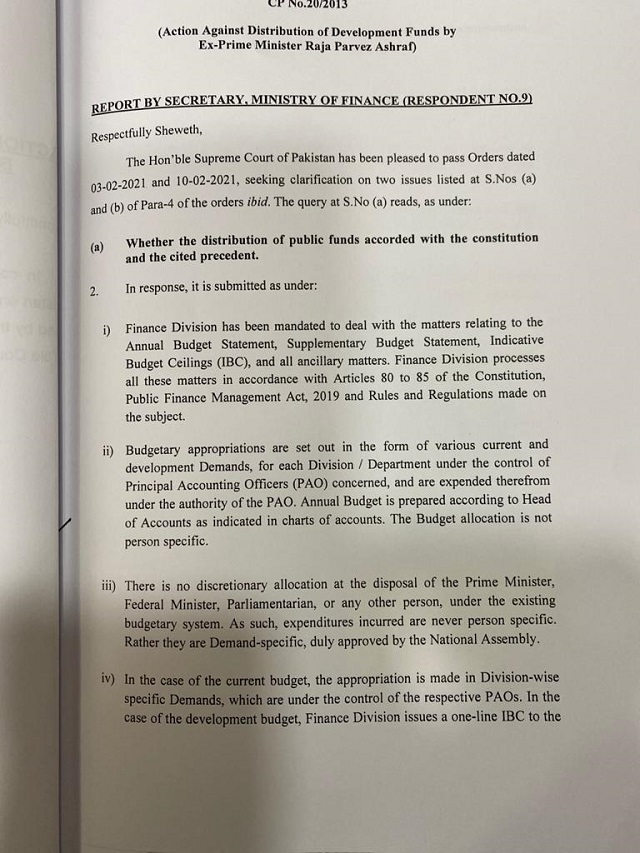 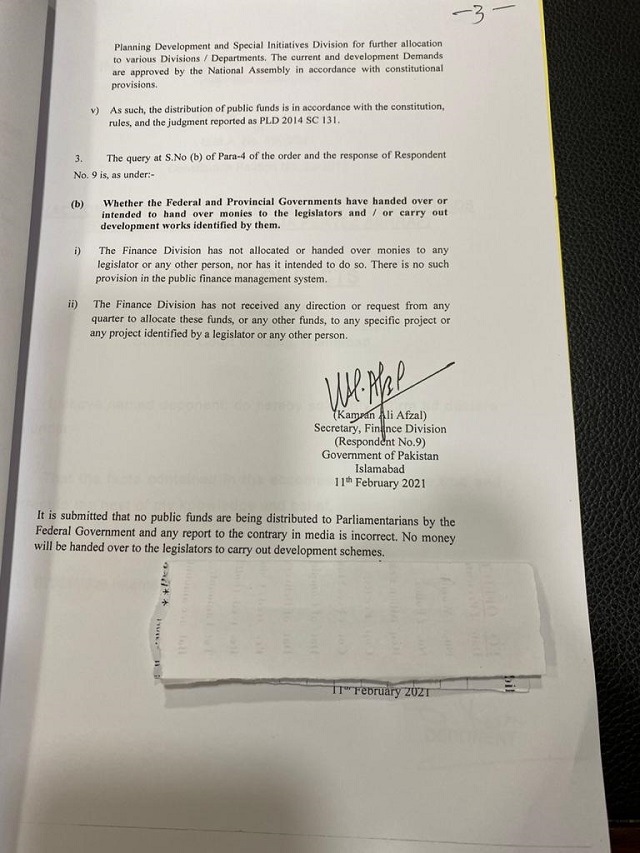