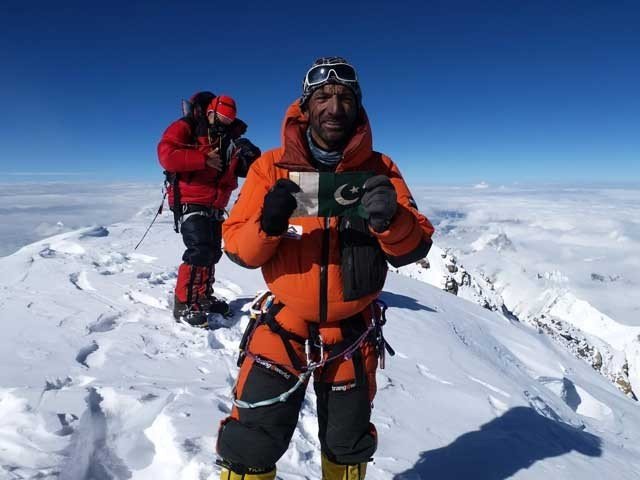 The ground rescue team will have a special meeting at the commissioner's office today. PHOTO: FILE
GILGIT BALTISTAN:

Due to bad weather conditions, the search operation for lost climbers was called off again on Wednesday, informed missing climber Ali Sadpara's son Sajid Sadpara in a tweet.

Sajid announced that the search for his father and other mountaineers had to once again be called off as he asked people to remember his father in their prayers.

Earlier, it was reported that a team of six local climbers had been formed to continue the search for missing climbers - Ali Sadpara, John Snorri and Juan Pablo Mohr - by land.

An aerial search operation for the three missing climbers was temporarily suspended a day ago due to strong winds and snowfall, and was to resume today with army deploying a C-130 for the mission.

However, prevailing bad weather conditions appeared to have made it difficult to rely only on an air operation.

According to rescue sources, area around the K2 and Baltoro Glacier remained covered by dark clouds even today.

The team of climbers was to attempt reaching the treacherous peak on foot with aerial guidance. A special meeting to finalise the details of the rescue mission was also reportedly to be held today at the commissioner's office.

Rescue efforts have been on since Pakistan's Ali Sadpara, 45, Iceland's John Snorri, 47, and Chile's Juan Pablo Mohr, 34, went missing on February 5 while attempting to ascent the K2.

The climbers were last seen on the day around noon at what is considered the most difficult part of the climb: the Bottleneck, a steep and narrow gully just 300 metres shy of the 8,611 metre (28,251 ft) high K2.

Also read: Explainer: Why is K2 a 'savage mountain' for climbers?

Ali's son, Sajid Sadpara, and his cousins, Imtiaz and Akbar, have also been assisting the rescue efforts. They are all experienced climbers; his cousins are also said to have summited the K2 before.

Talking to the media at the end of the second day's rescue mission, Sajid had said that the chances of the three climbers returning alive after three days were "next to none" under such harsh conditions.

With Pakistan's borders open and with few other places to go, this winter an unprecedented four teams totalling around 60 climbers converged on the mountain, more than all previous expeditions put together.

Unlike Mount Everest, which has been topped by thousands of climbers young and old, K2 is much less travelled.