Chances of Ali Sadpara returning alive 'next to none', says son 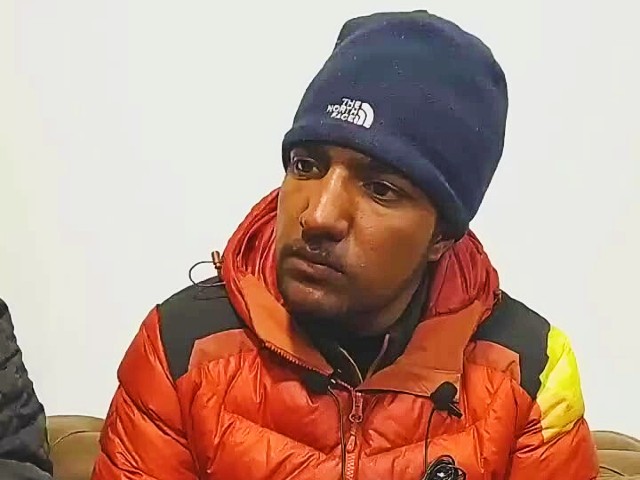 Sajid Ali Sadpara — son of renowned Pakistani mountaineer Muhammad Ali Sadpara who had gone missing while attempting a winter summit of K2 on Friday night — said that the chances of the three climbers returning alive after three days were "next to none" under such harsh conditions.

Talking to the media after the end of second-day rescue mission in Skardu, Sajid suggested that the three climbers may have had an accident while descending from the K2 "Bottleneck", considered the most dangerous route of the entire expedition.

According to AdventureStats, 13 out of the last 14 fatalities on K2 have occurred at or near the Bottleneck.

Image of mighty #K2 describing the place bottleneck/death zone, where precious #alisadpara and his fellow climbers lost.. We are praying for his safe return, Allah Mian please some miracle 🙏 pic.twitter.com/EfBdMqE1Jt

"There is no hope to live [under such harsh conditions] for three straight days," Sajid said. “When I returned from Bottleneck at 8,200 metres, they were climbing up the Bottleneck at 11AM [on Friday]. I’m sure they made the K2 summit and on their way back they may have had an accident, that’s why they are missing,” he added.

He, however, added that the search and rescue mission should continue to recover the bodies.

Explaining his decision to return from the expedition, Sajid said that he realised that it will be difficult for him to continue the expedition without oxygen after reaching 8,200 metres, adding that when he tried to use the available oxygen, it emerged that their regulators had leaked.

He said that at that point in the expedition, he was mentally disturbed and his father and John Snorri asked him to return.

The rescue and search team of Pakistan Army using helicopters started the mission on Saturday in extremely challenging weather and flew as high as 7,000 meters but unfortunately have not spotted anyone thus far, officials said.

Muhammad Ali Sadpara is a Pakistani mountaineer and has proudly hoisted the country's flag on eight peaks. He was also part of the team which successfully achieved the first-ever winter summit on Nanga Parbat in 2016.

"Praying for a miracle," the Alpine Adventure Guides said on its official Twitter handle earlier this morning.

Praying for a miracle :(
Pakistan army's 5th Squadron helicopter are ready to fly towards K2, will carry out the search & rescue again today.
Chhang Dawa Sherpa & others will be ready at K2 BC to take up as possible higher, to search missing climbers. 🙏 #K2winter2020 pic.twitter.com/Kj1cRJBcBD

Winds on K2's peak can blow at more than 200 kilometres per hour (125 miles per hour) and temperatures drop to minus 60 degrees Celsius (minus 76 Fahrenheit).

With Pakistan's borders open and with few other places to go, this winter an unprecedented four teams totalling around 60 climbers converged on the mountain, more than all previous expeditions put together.

Unlike Mount Everest, which has been topped by thousands of climbers young and old, K2 is much less travelled.