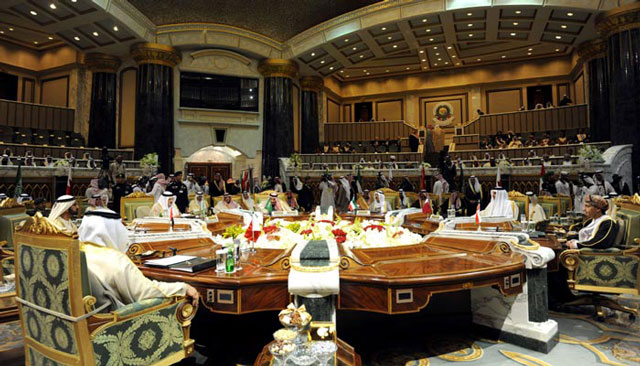 Gulf Arab leaders are gathering in Saudi Arabia today (Tuesday) for a summit that is expected to see a formal agreement towards ending a long-running dispute with Qatar that shattered Gulf unity at a time of heightened regional tensions with Iran. PHOTO: Reuters/File
ISLAMABAD:

Pakistan on Tuesday welcomed rapprochement between Qatar and other Gulf countries, as in a significant development Saudi Arabia and other countries have decided to lift land, air and sea blockade of Qatar, ending the over three year standoff.

Relations among the Arab nations soured in 2017, when Saudi Arabia and its allies — the United Arab Emirates, Bahrain and Egypt — imposed a diplomatic, trade and travel blockade on Qatar.

They accused the tiny Gulf nation of supporting terrorism and of being too close to Iran, allegations that Doha has always denied.

Gulf leaders signed a “solidarity and stability” agreement in Saudi Arabia as they met for the Gulf Cooperation Council annual summit on Tuesday, according to Al-Jazeera.

The agreement signed a day after Saudi Arabia announced the reopening of land borders with Qatar after a three-and-a-half-year spat that saw the kingdom, Egypt, the United Arab Emirates (UAE) and Bahrain cut diplomatic and trade ties and impose a land, sea and air blockade on the Gulf state.

The quartet accused Doha of, among other things, supporting terrorist groups and being too close to Iran, allegations that Qatar has consistently denied.

While the Saudi decision marks a major milestone towards resolving the Gulf crisis, the path to full reconciliation is far from guaranteed.

The rift between Abu Dhabi and Doha has been deepest, with the UAE and Qatar at sharp ideological odds, reports the Doha-based English news channel.

Kuwait has played a key role in brokering the deal between Qatar and other Gulf countries.

The development may have positive impact on Pakistan as it had been trying to maintain a balance in its ties between Saudi Arabia and Qatar.

When Riyadh imposed the blockade on Qatar in 2017, Saudi Arabia reportedly asked Pakistan to side with the kingdom. However, Islamabad tried to stay neutral, offering instead its good offices to resolve differences between Qatar and other Gulf countries.

It was because of this reason that Pakistan was quick to welcome the deal between Qatar and Saudi Arabia.

“We also appreciate other steps being taken by the countries of the Gulf Cooperation Council (GCC), which will contribute to resolution of outstanding issues between the countries of the organization persisting for almost four years,” said a statement issued by the foreign office.

Pakistan lauded the positive role played by the Emir of Kuwait towards the resolution of the differences between the countries of the GCC.

His persistent and sincere efforts, and cooperation of the GCC countries, led to this important and amicable outcome.

“We hope that the GCC summit, being held today in Al-Ula, will further build on these encouraging developments and lead to enhanced confidence and cooperation among the countries of the organization,” it added.

It further said Pakistan continued to accord high importance to its relationship with the Gulf Cooperation Council, as well as its bilateral relations with all GCC countries.

Saudi Arabia said that the United Arab Emirates, Bahrain and Egypt were joining it in re-establishing ties with Qatar, whose ruler was greeted with a warm embrace on arrival in the kingdom by Crown Prince Mohammed bin Salman.

"What happened today is... the turning of the page on all points of difference and a full return of diplomatic relations," Saudi Foreign Minister Prince Faisal bin Farhan said.

Leaders of the six-member Gulf Cooperation Council signed two documents on Tuesday, the Al-Ula Declaration and a final communiqué.

They are general in terms, but Prince Mohammed said the agreement affirms "our Gulf, Arab and Islamic solidarity and stability".

He called for unity to confront challenges facing the region, singling out "the threats posed by the Iranian regime's nuclear and ballistic missile programme and its plans for sabotage and destruction."

The GCC consists of three of the countries that boycotted Qatar - Saudi, the United Arab Emirates and Bahrain -- neutral Oman and Kuwait, and Qatar.

Prince Mohamed extended an enthusiastic welcome to Qatar's Sheikh Tamim bin Hamad al-Thani, after the emir landed in the kingdom for the first time since the crisis began.

Sheikh Tamim was whisked with the other leaders through Al-Ula's dramatic Martian landscape to the shimmering Maraya Concert Hall, a mirrored structure situated in a nearby valley.

Later, Saudi state media tweeted a photo of the young Saudi leader behind the wheel of his sports utility vehicle, taking Sheikh Tamim on a tour of the area.

At the start of the crisis, the boycotting countries issued a list of 13 demands to Doha, including the closure of pan-Arab satellite television channel Al Jazeera, undertakings on "terror" financing, and the shuttering of a Turkish military base in Qatar.

Qatar has not publicly bowed to any of the demands. (With input from AFP)