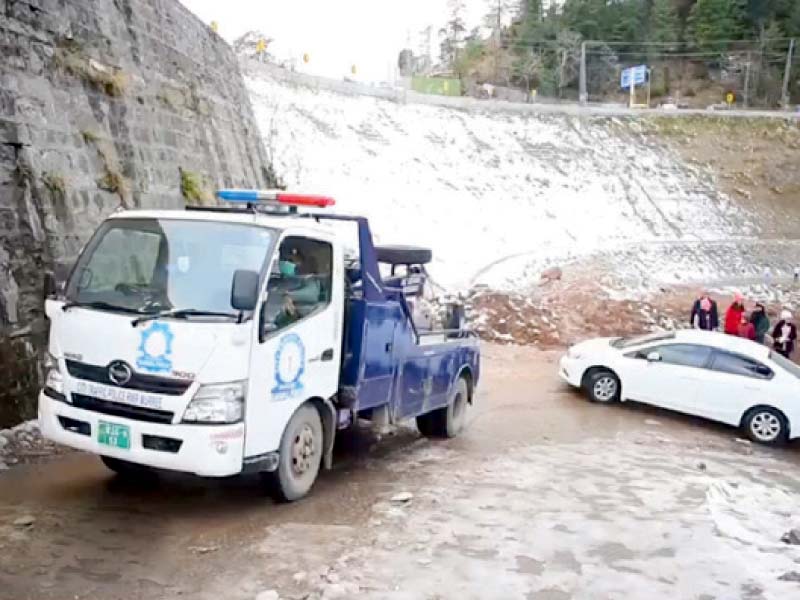 There was a record rush of tourists in Murree and Galiyat where long queues of cars were seen stranded on roads as there was no place left to move. People were seen looking skywards enjoying snowflakes falling on their faces or walking about in rush of the Mall Road.

Murree CTP In-Charge Shafiqur Rehman said that the roads have become slippery after rainfall and therefore, the driver should be extra careful while driving.

He advised road-users to use 4x4 vehicles and tie up chains on the wheels if the vehicle is normal two-wheel drive.

The air pressure in the tyres should be kept low whereas a tow-chain should be carried while visiting Murree on wheels. Traffic in-charge advised the tourists to approach the Murree CTP helpline in case of help or emergency.

Meanwhile, a Pakistan-born US citizen, who was visiting the homeland after two decades, was stranded in Murree. However, the CTP helped to rescue her and guided her to the destination.

The female tourist paid tribute to the Murree CTP and said that the traffic personnel worked as a GPS for her.

Besides Murree, tourists from across the country thronged Ayubia and Galyat to witness the snowfall on Monday.

All small and big hotels in the hill station were packed as hundreds of visitors from Islamabad, Lahore, Peshawar and other parts of the country arrived in Murree and Galyat after the prediction of snowfall.

As of now, all streets of Galyat including Ayubia, Khanspur, Changla Gali, Koza Gali, Nathiagali are filled with visitors who could be seen consuming foods and drinks from roadside kiosks to keep their bodies warm in the chilly weather.

The breath taking sight of snow-capped mountains is also a delight for the tourists from the planes.

On the other hand, it has been observed that the traffic police have allegedly colluded with the hotel owners and thus create deliberate hours-long traffic jams on the main road near Ayubia chairlift so that the visitors get exhausted and have a meal in the roadside restaurants.

The other problem is the jeeps that make rounds on the roads to make them slippery and then fleece the stuck road-users to tow their vehicles to the destinations.

The district and police officials have turned a blind eye to the issue and tourists have been left at the mercy of the mafias.

However, in Murree the police were more vigilant. Chief Traffic Officer (CTO) Rawalpindi on Monday appreciated the traffic wardens who worked hard to regulate traffic in Murree during Christmas holidays.

The CTO lauded the efforts of CTP officers as good arrangements were made for Murree and heavy traffic load was managed.

He said that over 106,000 vehicles entered Murree during Christmas holidays, December 25 to 27 but the huge traffic load was regulated and no unpleasant incident occurred. The CTO said that the traffic wardens deployed in Murree worked hard and remained on duty round the clock to regulate traffic.