Renowned supermodel Gigi Hadid has sent her love to Pakistani artist Misha Japanwala after the latter shared an inspiring anecdote involving the prior.

Turns out Hadid had rescued the New York-based artist amid the pandemic which had caused a financial crunch world over.

Turning to her social media, Japanwala answered her follower’s question about her favourite creation this year. She shared a picture donning a sculptural mask which she had created and wrote: “When the pandemic hit, I lost my full time job in fashion (and along with it the visa that was keeping me in the country/my health insurance/my income) and was at an all-time low.” 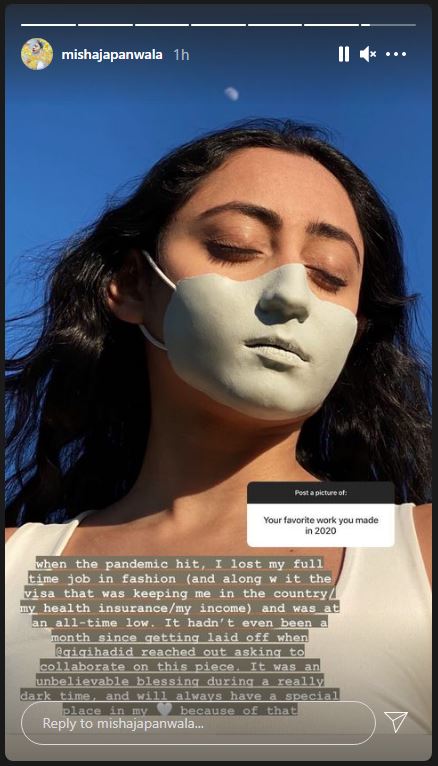 “It hadn’t even been a month since getting laid off when Gigi Hadid reached out, asking to collaborate on this piece,” Japanwala continued.

“It was an unbelievable blessing during a really dark time, and will always have a special place in heart because of that,” she concluded.

Hadid re-shared her story on her profile along with a heart emoticon.

Japanwala and Hadid collaborated for the model’s ‘Gigi Journal Part II’ which features the artist’s work, along with that of others from across the globe.

She had shared an appreciation post earlier in July about the same. “So excited to finally share the finished image for #GigiJournalPartII @vmagazine , which is officially on selected newsstands! I couldn’t be more proud to be part of this very special publication, guest edited and creative directed by Gigi Hadid,” wrote the artist.

“I never thought that at the time of the journal’s publication, cases in the US would be surging in 41 states and that hospitals would be swelling. For those who continue to resist precautionary measures and try to argue that the threat of this virus is false, I have family working in an ER full of Covid-19 patients… and can promise you this is very real. So please, wear a [expletive] mask and wash your hands! It’s the absolute least we can do.

She then dedicated her work to the frontliners risking their lives against the virus.

Every choice you make makes you