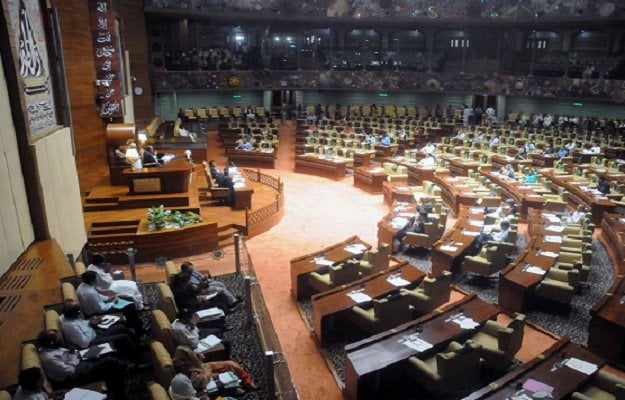 Opposition parties in Sindh have contended that the existing local government system in the province has failed to cater to the needs of the public.

The opposition party leaders said that the Sindh government should hold talks with all the other provincial parties and stakeholders or summon an All-Parties Conference (APC) to mull over the matter.

The opposition parties demanded that the new system should include reforms for police, education, health, building control, water board, solid waste management, transport and other departments.

Under the system, district-level financial commissions should be set up and local governments should be given political, administrative and financial powers.

The opposition leaders believe that would be the correct method to resolve the problems of people at the grassroots level. The demands also urged the federal government to release the results of the census so that local body elections can be held by forming new constituencies.

Karachi mega projects should be completed as soon as possible, they opined.

Responding to the opposition’s litany of demands, the Sindh government said that a committee of provincial ministers is working to reform Sindh’s local government system or to create a new one.

“We can consult with all parties if needed. The PPP is trying to solve the problems of the province including Karachi,” said Sindh government spokesperson Murtaza Wahab.

Wahab said that the PPP government in Sindh allowed the term of the local governments to come to an end in the province, so that the democratic and parliamentary system could be strengthened.

“Karachi and Sindh are not separate,” said the PPP spokesman regarding the oft-repeated notion that Karachi should be a separate administrative unit, adding that the talks of a new local government system only serve to invoke ‘prejudice’.

“The laws that the Sindh Assembly makes are not only for Karachi but they are for the entire province,” he said. The lawmaker assured that the port city’s stakeholders, including the federation, are trying to resolve the issues of the city and work is being done for the completion of the mega projects.

The Sindh government spokesman also took aim at the ruling PTI, questioning its criteria to improve the local government system in Punjab and Khyber Pakhtunkhwa.

Wahab said after the approval of the provincial cabinet, amendments to the local government system or a new system will be approved by the Sindh Assembly.

“Parliamentary parties may be consulted if necessary,” he mentioned.

“A local government is the first step in a democratic system. Karachi has no clean drinking water, no electricity and no gas, corruption is rampant in every provincial government agency,” he said, adding that an empowered local government system needs time to streamline things.

Pakistan Muslim League-Nawaz leader and former senator Nehal Hashmi, in his statement, objected to the concept of the local government in Sindh, saying in such a system all the important departments are with the provincial government.

“A local government system should be formed in which union council or committee, taluka or towns and district governments are financially and administratively strong. There should be an integrated body to check this system. In order to solve the problems of Karachi, it is necessary for the local governments to have the power to solve the problems of transport, drinking water, infrastructure, electricity and others.”