Addressing a joint press conference after signing of two accords on scientific cooperation and readmission agreement, Prime Minister Imran Khan said that both the countries would continue meetings to improve trade and cooperation in every field.

The two leaders exchanged views on the entire gamut of bilateral relations and agreed to further deepen mutual cooperation in all fields, especially in the economic, trade and investment, science and technology, defence industry, educational and cultural arenas. It was also agreed to maintain frequent bilateral exchanges, including at the highest level.

“Today we have signed agreements and also discussed that we want to improve the relationship, especially, trade relationship, which unfortunately stands at only 4.5 million Euros; which is nothing,” he noted.

For the support of Bosnia to the stance of Pakistan regarding Indian Illegally Occupied Jammu and Kashmir (IIOJK) , PM Imran said, Bosnian government took a very principle stance; they talked about the rights of the people of Kashmir; a just settlement.

The premier said he has explained to the dignitary that India, unfortunately, has been taken over by a “fascist extremist ideology” and it’s not just what they are doing in Kashmir but what is happening to minorities, especially, Muslims in India.

PM Imran revealed that they have discussed what is happening in France as well, saying “both of us condemned the terrorist acts by Muslims in France like all countries would condemn them. But at the same time, we felt that for inter-religious harmony it is important that freedom of speech is not used as an instrument to hurt the feelings of any religious community.”

The prime minister added that any insult, ridicule and mocking of Prophet (PBUH) causes the greatest pain to the Muslim community and European powers and western countries must understand that they can’t use freedom of speech as a weapon to cause Muslims pain by insulting Prophet (PBUH).

“Unless this is understood”, he maintained, “The cycle of violence will keep happening; there will be provocation; Muslims will react; there will be a reaction against the Muslims living in western countries and specifically in France which will lead to marginalization, ghettoization, more radicalization and the cycle will continue unless there is an understanding that respect for the sentiments of every religious community and, specifically, Muslims living in Europe.”

Džaferović, in his address, said that he was happy to visit Pakistan on the invitation of PM Imran.

“Pakistan and Bosnia Herzegovina have always been two very friendly countries; there are no open issues between our countries. However, we have plenty of opportunities for expanding the cooperation that already exists between us,” Džaferović said.

Džaferović added that Bosnia condemned the terrorist attacks that took place in France, Austria and many other places throughout the world.

“We have a joint stance on the issue that terrorism is a global evil and nothing good can come out of that evil,” he added.

He added that Bosnia Herzegovina was built around the diversity.

“I see that as wealth and I do not see as a reason of any contempt or any disagreement,” he said adding that both the countries had successfully fought the first surge of the pandemic, and that he was grateful to PM Imran for offering assistance in this regard.

He thanked PM for all the assistance Pakistan provided to Bosnia Herzegovina during the war and after the war, saying he also thanks Pakistan for sending people within the peacekeeping troops to United Nations, who helped in stabilization process afterwards.

Džaferović said both the countries have discussed the opportunities for further cooperation and signed two important agreements today, adding that opportunities to increase trade exchange needed to be enhanced.

Military industry, agriculture, economy and diplomatic academy in Pakistan were only some of the opportunities that both countries touched upon; saying the list of the areas where cooperation can be increased and expanded in future was long.

During his earlier meeting with Foreign Minister Shah Mahmood Qureshi, Chairman of the Presidency of Bosnia and Herzegovina Sefik Dzaferovic called for peaceful resolution of Kashmir dispute in the light of United Nations Security Council (UNSC) resolutions.

"Human rights should be respected in occupied Jammu and Kashmir," the Bosnian president said.

He added that Pakistan and Bosnia enjoyed close relations and his visit would further strengthen bilateral relations.

FM Qureshi briefed the President Dzaferovic about the situation in Indian illegally occupied Jammu and Kashmir (IIOJK) and appreciated his statement on the occupied territory. 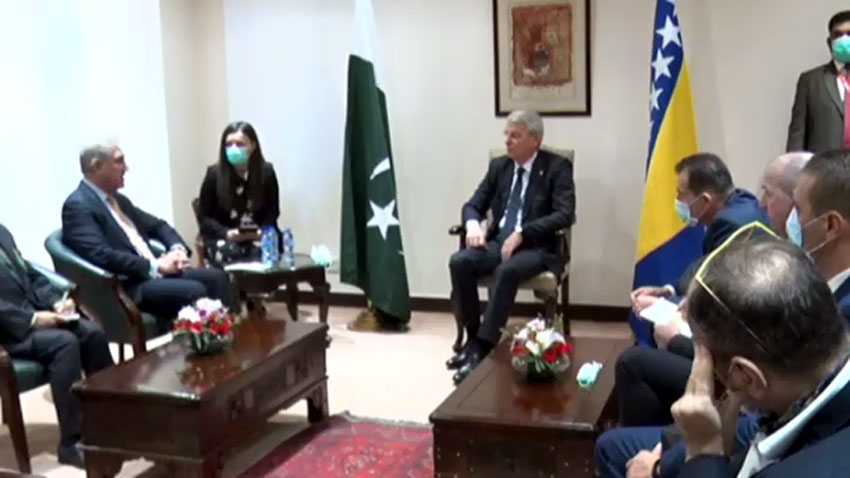 "Both the countries have always stood by each other in difficult times," the FM said. "Pakistan desires to expand relations with Bosnia in different fields including bilateral trade, education, culture and people to people contacts."

President Dzaferovic was earlier received by Minister of State for Climate Change Zartaj Gul along with other officials upon his arrival.

A high-level delegation, including the minister for security as well as presidential advisers, were accompanying the Bosnian and Herzegovina chairman.

He is also scheduled to hold talks with President Arif Alvi and interact with National Assembly Speaker Asad Qaiser, Adviser to Prime Minister on Commerce and Investment Abdul Razak Dawood and other dignitaries.

Dzaferovic’s visit would serve to enhance bilateral relations and strengthen cooperative bonds between the two countries.

PM Imran had met the chairman on the sidelines of 14th OIC Summit in Makkah in May last year.

Pakistan enjoys traditionally warm and friendly relations with Bosnia and Herzegovina. The two countries have extended support to each other in times of need. During the years 1994-95, Pakistan was a significant contributor of troops to the UN Peacekeeping Mission. Bosnia and Herzegovina provided assistance during the 2005 earthquake and 2010 floods in Pakistan.

High-level exchanges are an important feature of the bilateral relationship. The two sides are committed to further deepen and broaden cooperation in diverse fields – including trade, commerce, education, culture and people-to-people exchanges, the official statement added.

“The visit of the Chairman of the Presidency of Bosnia and Herzegovina will serve to enhance bilateral relations and strengthen cooperative bonds between the peoples of the two countries.”