Six people, including the driver and conductor of the van, have been identified so far 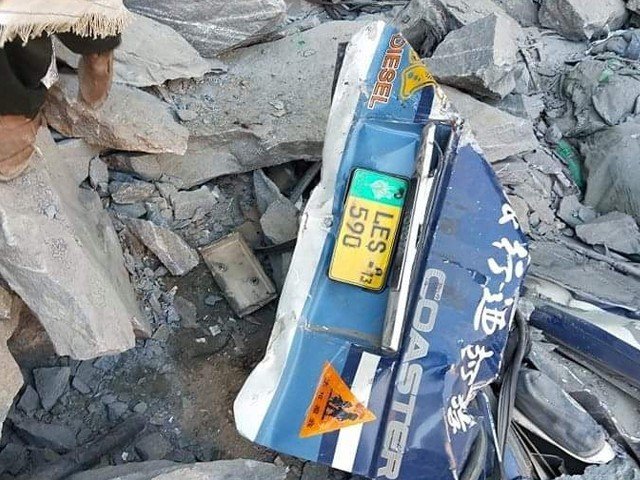 At least 16 people were killed after a Skardu-bound passenger coach was struck by a landslide near Tangus on the Gilgit-Skardu Road, on Sunday.

According to SDPO Muhammad Hassan, bodies of the 16 people have been recovered. Among the deceased, six persons including the driver and conductor, have been identified so far.

He added that the road will be opened for traffic once the rescue operation is completed.

Earlier in September, a landslide in Khyber-Pakhtunkhwa province killed at least 23 miners and injured another 20. The incident occurred in Safi Tehsil of Mohmand district, that sits near the Afghanistan border.

According to a survey done later the same month revealed that around a third of the mines in the district were ‘high risk’.

However, the provincial mines and minerals department drafted guidelines to allow the safe reopening of mines which were closed after the incident.

This was disclosed by Special Assistant to the Khyber-Pakhtunkhwa (K-P) Chief Minister on Mines and Minerals Arif Ahmedzai in separate meetings with the chief inspector of mines, monitoring officers and other officials from the provincial mines and minerals department.

In the wake of the Ziarat incident, he said that the provincial government had imposed a ban on mining in the district and ordered an inspection of all registered mines to check how many mines were following prescribed safety rules.