Contractors stop work due to non-payment of dues 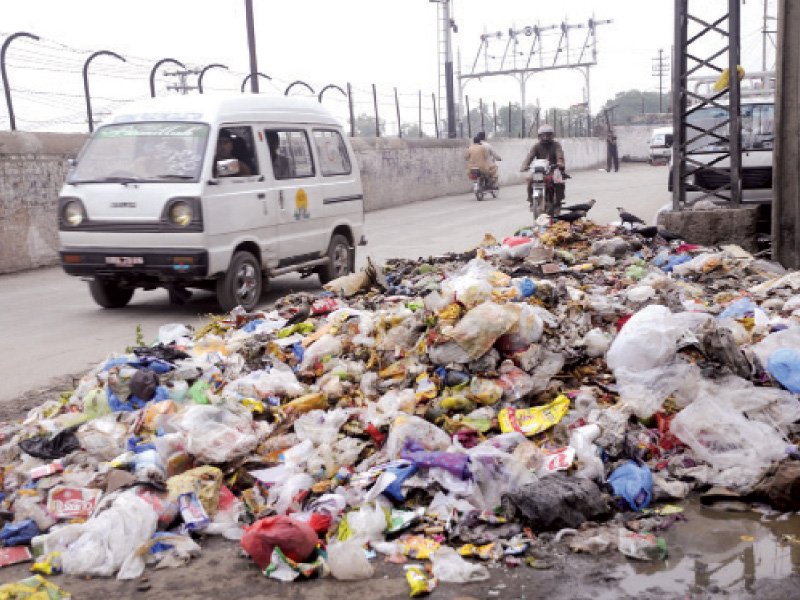 The provincial capital’s major arteries and streets have been littered with mounds of garbage as the contractors of the Lahore Waste Management Company (LWMC) who collect garbage stopped working due to non-payment of dues.

More than 70% of vehicles of the LWMC’s contractors are out of order and several staff members including the drivers have refused to work due to non-payment of their arrears.

Lahore has an area of 1,772 kilometres square with the ever bludgeoning population. The private contractors are charging around $19.5 per tonne to lift the garbage. Over the past 10 years, these contractors have been paid more than Rs80 billion. These overseas companies ie Al-Bayrak and Ozpak have divided the city areas into two parts for cleanliness operations. There are more than 10,000 sanitary workers and more than 800 vehicles which collect garbage.

Though the contract of the companies with the LWMC has expired, these companies will work till December under a mutual agreement.

There is a lingering dispute between the LWMC, its contractors and employees due to non-payment of arrears.

Garbage has spread all around on street of the city and garbage collection is not being undertaken and all union councils of Lahore are filled with heaps of garbage.

The contractors, Albayrak and Ozpak, claim the unpaid balance of Rs3 billion against the waste management services provided to the government entity.

Now that the agreement will be over by December 2020, their vehicles have already been reached their maximum age.

Reportedly, the previous and the current government did not purchase new vehicles. They spent more than Rs3.24 billion for the maintenance of these vehicles during the aforementioned period and instead of allowing the purchase of new vehicles at the board meeting of the former and current waste management company, they kept on using the obsolete vehicles.

Lahore’s tonnes of garbage is lying on the city streets and bazaars and this is gradually increasing. These waste piles pose a high health risk for the citizens by providing food and breeding ground to the pests and hosting several diseases.

The sanitation situation in the city is deteriorating with each passing day. The government of Punjab has appointed a new MD and chairman in the waste management company which will also be a test for them on how to get the company out of these problems.

Claims of environmentally friendly disposal of waste are also questionable. Trash is neither sorted nor disposed of correctly by the waste management company.

Even the notice taken by the chief minister could not guarantee a clean provincial capital.

In this regard, LWMC spokesman Khawar Jamil said that the MD and the chairman were negotiating with other contractors on the issue of sanitation in the city. He said if the contractors do not resume cleanliness work, the LWMC would take charge of the situation. He also voiced hope that the situation would improve in in the next few days.

On the first day in office, the chairman and CEO of the company has to face agitating workers demanding the release of their arrears. The LWMC contractors on the other hand also complained about delays in payment of their invoices.

Dozens of the LWMC workers once again staged a protest demonstration by blocking Main Ferozepur Road at Kalama Chowk in favour of their demands. A couple of weeks ago, they staged a similar demonstration in front of the company’s head office at Shaheen Complex.