TV Humayun Saeed, Fahad Mustafa get candid on 'Time Out With Ahsan Khan' 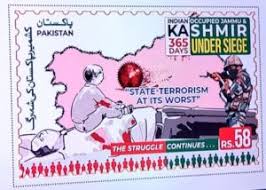 The government has unveiled a special postage stamp in connection with the Youm-e-Istehsal to be observed on Wednesday (tomorrow) to highlight the state of Indian Illegally Occupied Jammu and Kashmir (IIOJ&K) in the wake of Modi government’s August 5, 2019 decision.

Last year, India’s ruling Bharatiya Janata Party (BJP) stripped Kashmiris of the special autonomy – as per its constitution – they had for seven decades through a rushed presidential order. The move resulted in an indefinite security lockdown in the occupied territory and arrest of Kashmiri leaders.

“The objective of issuance of a commemorative postal stamp by the Pakistan Post is to expose the illegal actions of [Indian PM] Narendra Modi, today’s Hitler, in IIOJ&K,”

Murad Saeed, the communications and postal services minister, told reporters at the unveiling ceremony of the stamp on Monday. He was accompanied by Information Minister Shibli Faraz.

The communications minister said that a year of the military siege of the state would be completed on August 5 and the postal stamp would not only highlight Indian atrocities on the Kashmiris but also express Pakistanis’ love for them.

As the Pakistan Post was a member of the Universal Postal Union, he said the stamp would go to every part of the world and sensitise the people about the gravity of IIOJ&K’s situation.

Murad said Prime Minister Imran Khan had warned the world about the threat of Hindutva philosophy, which was not only dangerous for the Kashmiris but also the minorities across India.

He added that the premier, in his address to the United Nations General Assembly, had presented the Kashmir case in an “unprecedented manner” and played the role of Kashmiris’ ambassador.

Elaborating about the commemoration, he said the picture on the postal stamp would highlight the military siege and communications blackout of the state, besides big presence of the Indian occupation forces. It would depict a minor sitting over the body of his slain grandfather killed by the Indian occupation troops in

The communications minister said: “The number, 58, written on the postage stamp reflects the August 5 lockdown in IIOJ&K.” He also said that Kashmiris’ love for Pakistan could be judged from the fact that they buried their martyred people wrapped in the Pakistani flag.

He urged the nation to wave the flags of both Pakistan and Kashmir tomorrow to show their support towards Kashmiris.

During the media talk, the information minister said Youm-e-Istehsal would be observed with national zeal to expose the Indian actions in the occupied valley.

Indian illegal action was symbolic to convey the message to the entire world that Pakistan stood with the Kashmiris in their just struggle for the right to self-determination.

Kashmir cause and exposing Indian atrocities, he added.

According to sources, PM Imran would make an address to the Legislative Assembly of Azad Jammu and Kashmir after leading a solidarity walk also to be joined by the AJK president and prime minister in Muzaffarabad. Besides solidarity walks across the country to be led by the political leadership regardless of the political divide, a one-minute silence would also be observed at 10 am after blaring of sirens.

A memorandum would be presented to the UN Observer Mission, they said, adding that the government would enhance its diplomatic outreach on the day by writing letters to the UN secretary general and world leaders, besides interactions of the prime minister with the international media. Publication of special Op-eds in the foreign media, special campaigns through print, electronic and especially social media, and presentation of a memo to the UN representative had also been planned.

Pakistani envoys across the world would engage with the local media, think tanks and community to apprise them about the Indian aggression and blatant violations of the repeated UNSC resolutions.

Kashmiris on both sides of the Line of Control and the world over would observe the Youm-e-Istehsal denounce illegal, immoral and unconstitutional step.

Moreover, because of the coronavirus pandemic instead of organising congregations, a demonstration would be held in front of the UN Office in Muzaffarabad. The leaders would also inaugurate the Lal Chowk constructed in relation to the Srinagar Lal Chowk.

On the instruction of PM Imran, a report detailing human rights violations in IIOJ&K and ceasefire violations by the Indian forces would also be formed.

It is pertinent to mention that a Senate session called upon for expressing solidarity with the Kashmiris would also be held in Islamabad. (WITH INPUT FROM APP)