The Fort’s gates are gradually losing their identity, therefore, restoring them has become very important 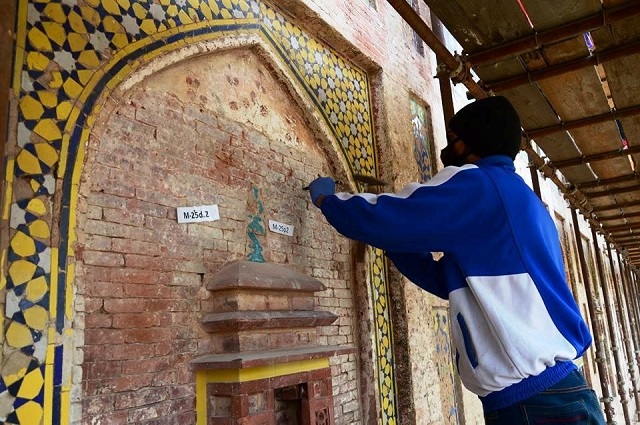 The Walled City of Lahore Authority (WCLA), with the assistance of the Aga Khan Trust, has recently completed the renovation of the Shah Burj Gate of Shahi Qila.

The Shahi Qila originally had 12 gates in the old city of Lahore out of which only six could remain intact after hundreds of years. Even among the six remaining gates, only one has been restored to its original condition.

Since the gates are gradually losing their identity and beauty, WCLA is trying its best to preserve this ancient heritage through speedy renovation.

The walled city of Lahore boasts a history dating back to thousands of years. During the reign of the Mughal Emperor Akbar, a 30-feet high wall was built around the city to protect it from invaders. The wall featured twelve gates for entrance.

During the rule of Maharaja Ranjit Singh, the height of the wall was reduced from 30 feet to 15 feet and a trench was also dug along the wall.

But when the British took over the subcontinent, a large part of the wall around the city was demolished. Moreover, many of the gates, including the Yakki Gate, the Akbari Gate, the Mochi Gate, the Masti Gate, and the Taxali Gate, were also torn down. Two of the gates – the Delhi Gate and the Lohari Gate – which were built during the British rule, were demolished as well.

Speaking to The Express Tribune, the Punjab Archaeology Department’s former director Afzal Khan said the idea of building a wall around Lahore was first conceived during the reign of Sultan Mahmood Ghaznavi at the beginning of the Eleventh Century.

“His army broke part of the wall to invade the city of Lahore. The wall was rebuilt by the Mughals when they took over Lahore in 1524,” he said. “Along with its twelve gates, a culvert called the Mori Gate was also constructed to throw out the city’s waste and garbage.”

Afzal Khan added the condition of the walls was still quite good when Ranjit Singh took over Lahore, after which the walls succumbed to natural wear and tear over the years.

Afzal Khan said that during his employment with the agricultural department, three gates were renovated and restored, including the Sheranwala Gate, the Lohari and the Kashmiri Gate.

Of the ancient gates, only the Roshnai Gate is in its original condition, facing north of the Badshahi Mosque and south of the Maharaja Ranjit Singh’s Samadhi.

WCLA spokesperson Tania Qureshi said the authority has successfully conserved and renovated three gates, including the Lohari Gate, the Delhi Gate and the Bhati Gate.

“The rooms of the Lohari Gate and the Delhi Gate have been restored and tourist information offices have been set up. Moreover, a Sarangi Music School has also been set up in the vicinity,” Qureshi added.

Speaking about the renovation of the Shah Burj Gate, she said that the project was completed in collaboration with the Aga Khan Cultural Trust.

“The project was part of the restoration of the Fort’s Picture Wall that began in 2019, which has now been completed,” she said. “The Burj Gate is also the entrance to the Shahi Qila, so that was prioritised.”

Qureshi explained that the rooms inside the Shah Burj Gate have also been cleaned and tourist information centres will soon be set up in these rooms. The Walled City of Lahore Authority has also completed the first phase of rehabilitation of the Royal Corridor that extends from the Delhi Gate to the Royal Fort. The Shahi Hamam was also renovated during this phase.