Home to the dying art of pottery-making

Home to the dying art of pottery-making 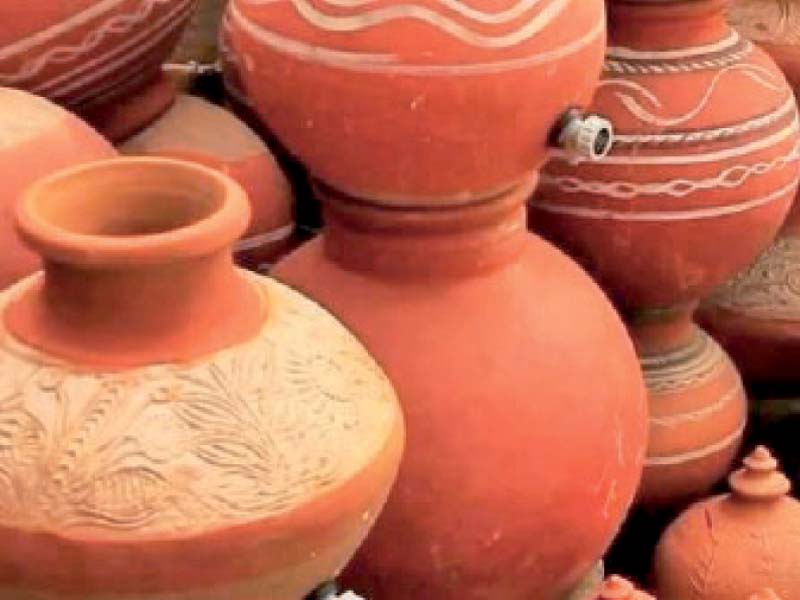 For a country which houses remains of some of the world’s oldest civilisations known for their use of clay, the centuries-old craft of traditional pottery-making still remains entrenched in Pakistan’s social mores in various way. However, while the craftsmanship is alive and caters to a small but long-held market, the gradual drop in demand for clay items has removed traditional potters from the mainstream and placed them in bazaars in the nooks and crannies of modern cities, where time stands still.

Deep within the teeming Gawalmandi area of Rawalpindi, is one such market popularly known by the locals as Kumhaar Gali or Potters’ Alley, which provides a glimpse into the past and tells those who walk past the many tales of its time. The street, which dates back to the British Raj, was once said to be populated by a majority of non-Muslim residents who were eventually replaced by Muslim immigrants following the split of the subcontinent. According to some locals, it was the few families who settled here in Kumhaar Gali, who gave the street its name and identity. “They were exceptional potters who especialised in working with clay. Turning a banal ball of clay into a piece of art is perhaps the first account of handiwork in history and carrying on the same tradition, the hands of the Kumhaar community are still busy molding clay into the most exquisite of jewels and pottery.”

A veteran Kumhaar Gali potter, reminiscing the bygone days of the street’s glory, said that there was a time when the alley would be filled to the brim with customers from all corners of the country, looking to buy clay goods. “It’s a lot of hard work making these pieces and the clay goes through many stages before it meets the buyer as a refined product- it is baked, soaked, and rubbed by hand for several hours before it is even ready for production,” shared the elderly potter. “Back in the day, a lot of famous people would also frequent Kumhaar Gali to examine and handpick their choice of pottery but it’s not the same anymore. Though there are still some people here and there who value the craft and the benefits of clay but as a whole, there’s a lot more labour and a lot less profit in this profession now,” he added. As per medical expert Ifikhar Shah, clay pots have the natural ability to purify water which makes them great for everyday usage at home. Traditional clay pots are made using portions of ground, sieved sawdust and are coated with silver nitrate. So when filled with water, the pot’s micro-texture is capable of filtering out physical contaminants while silver nitrate, which is a biocide blocks the biological contaminants in water. Speaking to The Express Tribune, Rehman Gul, a resident of Rawalpindi and frequent face at Kumhaar Gali, says. “I even have clay glasses and jugs at my home. There is something about the taste of cold water stored in clay which feels pure and healthy to me,” he expressed.