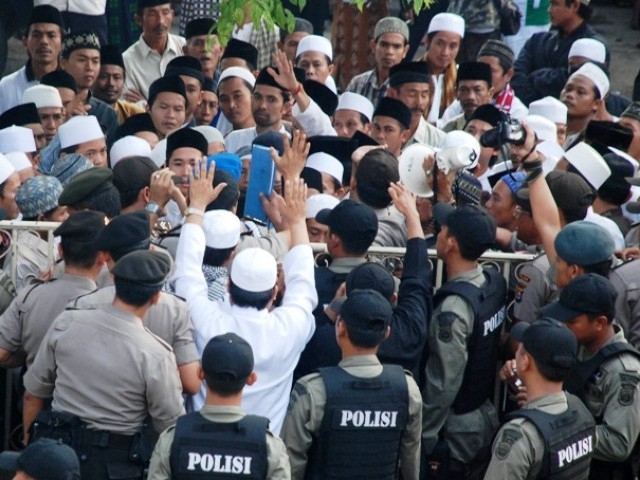 Indonesia policemen block Muslim supporters who are rallying in support for their friend, who was accused of assault on a Ahmadiyah follower, in Serang, Indonesia's Banten province July 28, 2011. PHOTO: REUTERS/FILE

JAKARTA: Indonesia on Friday dismissed expressions of outrage and disbelief over the perceived light sentences handed down to extremists who killed three minority sect members in a mob frenzy.

The United States and the European Union expressed strong misgivings while local rights groups and international watchdogs issued strong condemnations and calls for action to address rising intolerance in the mainly Muslim country.

But religious affairs ministry spokesman Zubaidi said the sentences of three to six months for the men accused of leading the murderous assault on the Ahmadiyah sect members in February were the result of a fair trial.

“As an executive body, we cannot interfere in the legal system. We believe in the law enforcers. They have the right to come up with the sentences,” he told AFP.

“Whether the sentences are light or harsh, how it’s perceived is relative.”

Indonesian President Susilo Bambang Yudhoyono, often held up by the United States and others as a champion of pluralism and democracy, made no comment on the sentences. Foreign ministry officials were unavailable to comment.

Human rights activists said prosecutors and the court in Serang, which handed down the verdicts, had been influenced by local Islamic leaders to play down the gravity of the crime.

They say religious violence against minorities is going unchecked in Indonesia, the world’s most populous Muslim-majority country, and criticise Yudhoyono for failing to defend the nation’s pluralist, moderate traditions.

But Zubaidi said the court was independent and its decisions could not be questioned.

“I don’t see that there has been any pressures from anyone. On the matter of intervention, I believe there was none,” he said.

The violence against the Ahmadiyah sect members in Cikeusik, western Java, was one of the most horrific in a long line of attacks on the minority group in Indonesia in recent years.

A secretly filmed video of the Cikeusik rampage sparked international concern when it appeared online within days of the attack.