In Sindh, the cold wave is likely to contin­ue till Januar­y 18
By ​ Our Correspondent
Published: January 12, 2020
Tweet Email 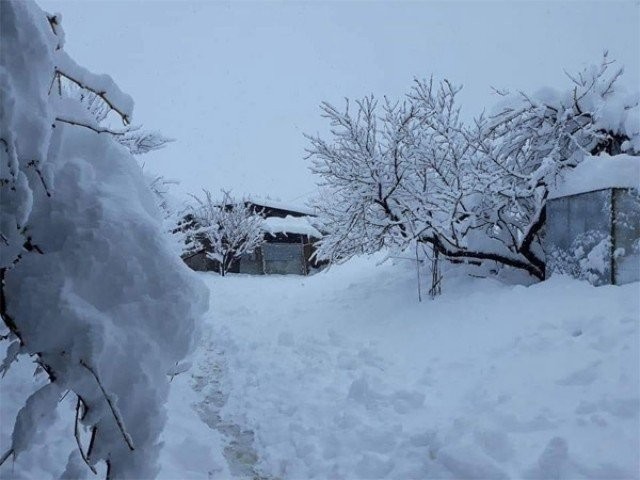 ISLAMABAD: Cold weather has brought life to a standstill in various parts Balochistan, Khyber-Pakhtunkhwa and Gilgit-Baltistan (G-B) as Siberian winds which entered the country intensified rain and heavy snowfall.

Quetta-Ziarat National Highway was closed for traffic due to the second spell of snowfall. More than two feet of snow has fallen as of now.

The Quetta-Karachi highway is also closed at Mastung due to snowfall, causing hundreds of travellers to get stuck.

Queues of vehicles were stranded at Khojak top near Chaman after heavy snow.

Amid freezing temperatures, gas pressure reduction and load-shedding added to the miseries of the people in parts of the province, including Quetta. Citizens faced difficulties in the severe cold.

According to Deputy Commissioner Bashir Khan, snowfall on the Quetta-Chaman highway forced the closure of the route for traffic at Khojak point. The administration is busy removing snow through heavy machinery at the spot, he added while also appealing to the people to avoid unnecessary travel on the route.

The Provincial Disaster Management Authority (PDMA) has instructed its district officers to remain alert keeping in view the situation.

At least three feet of snow has been recorded in Lipani, Lowari Tunnel, Kumrat Valley and other areas.

PMD Director Zaheer Ahmad Babar said that the weather will remain dry after Wednesday and cold wave will persist in most parts of the country during the next few days.

The cold weather has compelled residents to stay indoors. Shortage of gas or electricity in the area has added to the difficulties of the residents.

The Met office has predicted that Karachi may receive light rain tonight (Sunday), along with thunder and lightning.

According to the forecast, a new cold wave may hit the port city after the rain which may continue till January 18 causing the temperature to drop by 7 to 5 degrees Celsius.

According to the PMD, the north-western winds blew at maximum speeds of 50 kilometres per hour whereas fog reduced visibility to 4 kilometres in the morning.

According to the Met office, heavy snowfall in Gilgit-Baltistan is likely to continue for the next three days. Communications remain suspended, with no letup in snowfall in the region.