Musharraf not given ‘fair trial’ in treason case: interior minister

Musharraf not given ‘fair trial’ in treason case: interior minister 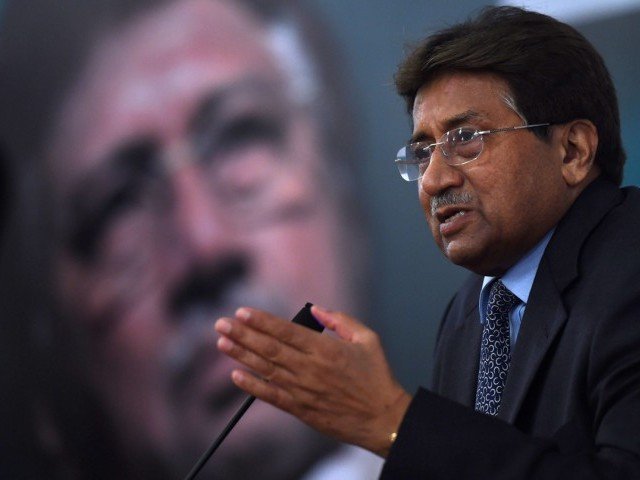 KARACHI: Interior Minister Ijaz Shah has said that the government believes legal requirements have not been completed in the high treason case against former military ruler Gen (retd) Pervez Musharraf and that he “has not been given [right to] fair trial”.

A three-judge special court – which has been taken up with the Musharraf treason trial since December 2013 – has said that it will announce its verdict on December 17 after hearing the arguments of the new prosecution team appointed by the government.

“Musharraf is the first man [in Pakistan’s history] who has been tried under Article VI [of the Constitution]. And this government believes it will be unfair if all the steps in the criminal justice procedure are not completed against him,” Shah said in an interview on Express News show, Centre Stage, on Thursday.

He said the government believes that Musharraf “should be given a fair chance”. “If you’re trying him [for treason], then there should be proper prosecution; he should be allowed to produce witnesses in his defence… the law should take its own course and all steps in the criminal justice procedure should be completed,” he added.

Ijaz Shah, who has remained a close associate of Gen (retd) Musharraf, insisted that it was not his personal viewpoint. “It is the viewpoint of this government,” said Shah, who had also served as Director General of Intelligence Bureau of Pakistan from 2004 to 2008.

He questioned the entire premise of the high treason charge brought in against Musharraf by the Nawaz Sharif-led government in 2013 for subverting the Constitution, saying that the “order under which he had been booked was wrong”. He said it would be travesty of justice if a man accused of murder was not given the right to defend himself.

“All legal processes must be completed in a trail under Article 6 because the punishment for treason is death or imprisonment for life,” said Shah.

He repeatedly parried a direct answer when asked if the government considers proclamation of a state of emergency is subversion of the Constitution. Shah referred to the observation of the Lahore High Court (LHC) which asked the prosecution on Tuesday if the imposition of emergency rule in 2007 by Musharraf falls under the ambit of Article 6. The LHC is hearing a petition from Musharraf seeking restraining order against the special court from announcing his verdict.

Shah also referred to the November 27 order of the Islamabad High Court in which it had stopped the special court from giving its judgment on December 5 while directing the government to notify a new prosecution team.

Zardari’s release on bail
The interior minister said PPP Co-chairperson Asif Ali Zardari had the right to get bail on medical grounds because he is not a convict and his case is in the investigation phase. “If a convict can go abroad, then Asif Zardari also deserves bail on medical grounds,” he said while referring to PML-N supremo who has been allowed by the court to travel abroad for medical treatment.

Shah sought to dispel the impression that Zardari was freed on bail after some understanding with the government. “He was given bail [by the IHC] on the recommendations of a medical board constituted on its orders,” he added. “The government has nothing to do with his release. I personally believe he is sick and I hope he recovers soon to defend the charges against him.”

Nawaz’s departure
Shah admitted that Nawaz Sharif’s departure to London put the ruling PTI in a bind, as it dented the party’s vote-bank. He categorically denied the PML-N supremo was allowed to travel abroad under some “deal”. “We will approach the Punjab government if he doesn’t return in four weeks,” he added.

The Lahore High Court granted Nawaz one-time permission to travel abroad for four weeks to seek treatment for his undiagnosed medical condition. Currently, he is receiving treatment in London, but family and party sources say that he might be flown to the United States.

He questioned the decision to let a convicted person to fly abroad. “I do not blame the court or the government. There is an impression that we have two sets of laws in this country – and removing a convict’s name from ECL on medical grounds only strengthens this impression,” he added.

Shah, however, said that the government would not allow PML-N Vice President Maryam Safdar to travel to London to see her ailing father. Maryam has petitioned the LHC seeking return of her passport and removal of her name from the no-fly list, so that she can fly to London to visit her father. The LHC referred her request to the interior ministry.

“Her siblings and relatives are already there to look after Nawaz. Why does she need to travel to London,” he questioned.

Lawyers’ attack on PIC
The interior minister called on Wednesday’s rampaging of Punjab Institute of Cardiology in Lahore the “worst tragedy that has befallen the country in its history”.

“I don’t know if I shall call it painful or shameful. Hospitals had not been attacked even during the world wars,” he said, adding that it was disappointing to see the “most educated class” of society storming a hospital.

FIRs registered against lawyers for attack on Punjab Institute of Cardiology

He added that two FIRs have been registered against the lawyers. “The attack involved around 500 people, while we have identified 35 to 40 of them through the video and CCTV footage of the incident,” he said and held out an assurance that the perpetrators would be given exemplary punishment.

BRT investigation
Shah said it was not for the National Accountability Bureau to decide whether the government would stay in office or not. The NAB chairman recently said that the bureau was waiting for the vacation of stay by the court to file reference regarding alleged financial irregularities in Peshawar’s Rapid Bus Transport (BRT) project and Swat’s Malam Jabba sports resort project.

“The FIA is conducting an independent inquiry into the BRT scandal. There is no harm in admitting if anything went wrong or mistakes were committed,” he said.