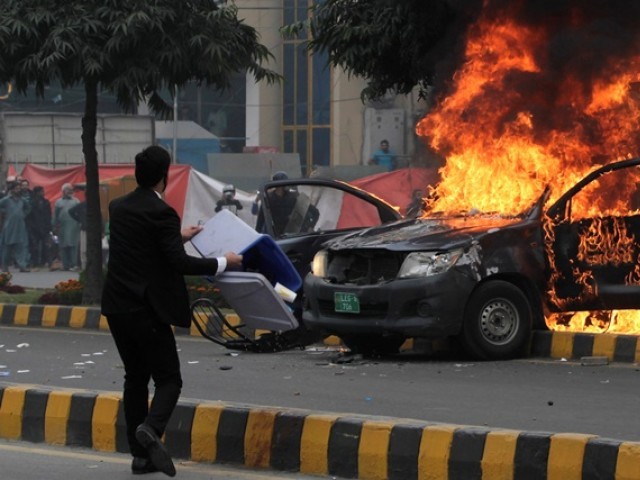 A lawyer throws trash bin towards police near a vehicle set on fire outside the Punjab Institute of Cardiology (PIC) in Lahore. PHOTO: REUTERS

LAHORE: Police have registered two cases on a range of charges, including terrorism and murder, against more than 250 lawyers who ran riot on Wednesday rampaging through the Punjab Institute of Cardiology (PIC), beating up medics, nurses – and even attendants, and damaging furniture and equipment at the facility.

At least three cardiac patients died as doctors and paramedical staff ran for safety while leaving them unattended at the ICU as scores of people donning black suits and wearing neckties stormed the province’s largest cardiac facility. 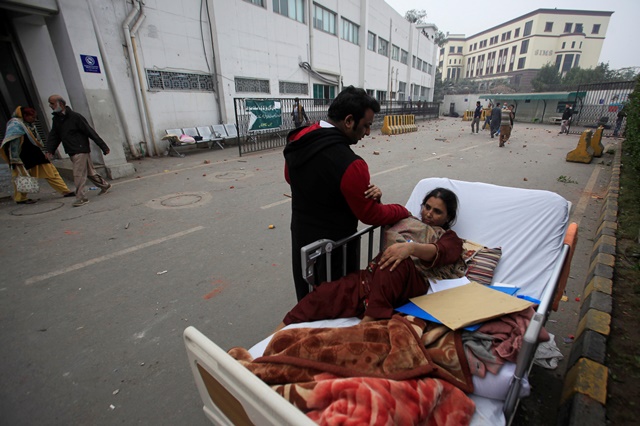 A relative takes care of a patient on a bed after she was taken out of her ward when a group of lawyers stormed PIC. PHOTO: REUTERS

What apparently triggered the ignoble attack – which triggered nationwide condemnation – was a video clip on social media in which a purported doctor taunted lawyers after thrashing one of their colleagues at the facility.

After the police managed to disperse the protesters at the hospital after an hours-long melee, the lawyers reassembled at GPO Chowk and blocked The Mall Road, demanding the arrest of the doctor who had taunted their community in the video clip. 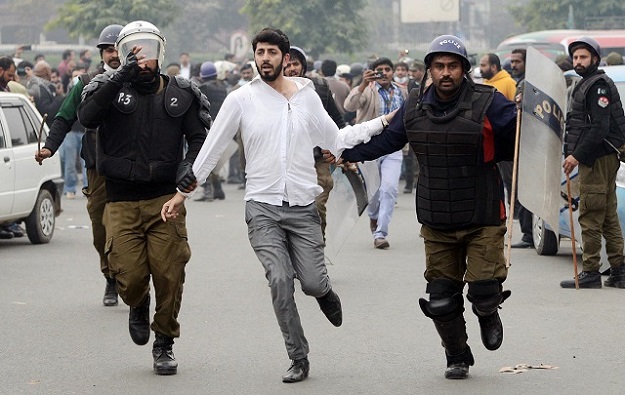 Police arrested lawyers during a clash between doctors and legal faternity at the Punjab Institute of Cardiology in provincial capital. PHOTO: ONLINE

In the FIR, the complainant alleged that he was on duty at PIC’s emergency department along with other doctors when he received a telephone call warning that a group of 200-250 enraged lawyers—led by LBA General Secretary Malik Maqsood Khokhar and Vice President Ijaz Basra—was heading towards the facility.

Some of the attackers were carrying firearms and clubs and they were instigated by the senior lawyers leading the group, he added.

The complainant added that the lawyers barged into the medical facility after scuffling with the police.

They damaged and destroyed vital medical equipment in different departments of the hospital while others tortured doctors and medical staff.

He alleged that a group of lawyers also forced their way into the nurses’ hostel and manhandled the hostel in-charge. He further alleged that the lawyers also resorted to aerial firing and the melee lasted at least two hours, creating panic and fear among people.

A separate FIR, lodged by Police Inspector Intikhab Hussain, alleged that some lawyers with a pistol and sticks approached his police vehicle and opened direct fire with an intention to kill him.

He added that sensing the gravity of the situation, he got into the car to leave, but the car ran over a sidewalk where lawyers surrounded it and started damaging it. He said the protesters fired on the police vehicle before setting it alight.

Later in the day, at least 52 lawyers detained during rioting on Wednesday were presented before an anti-terrorism court (ATC) in Lahore. They were brought to the court under tight security. A heavy contingent of law enforcers was deployed on the court premises.

After a brief hearing, ATC Judge Abdul Qayyum Khan sent the accused to jail on a 14-day judicial remand. The police had covered the faces of the accused lawyers while bringing them to the ATC. 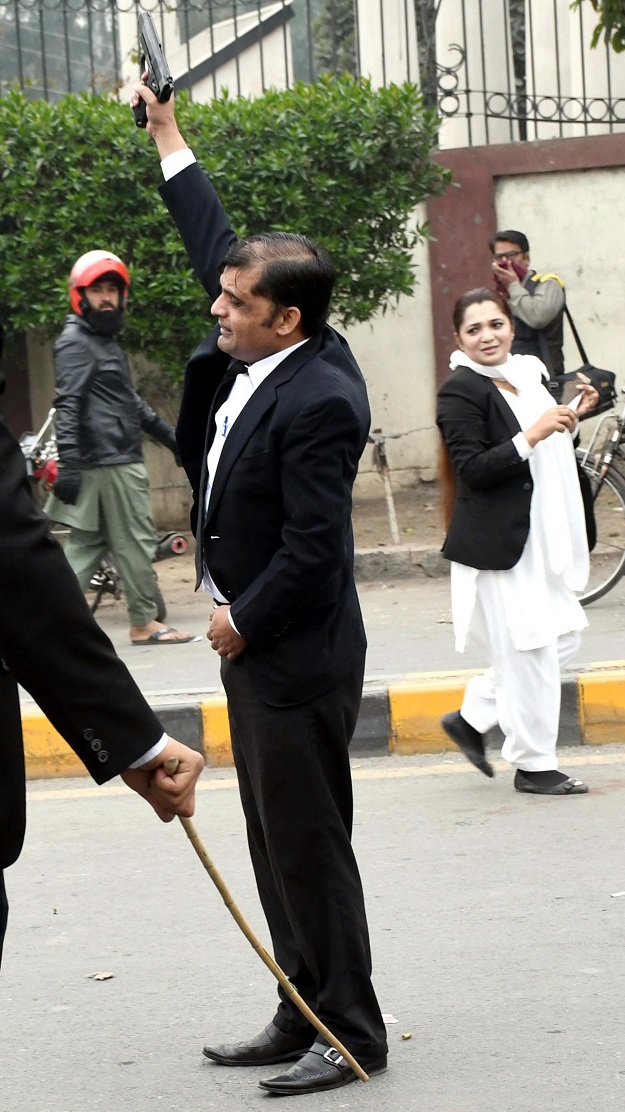 Lawyer opens a fire during clash at PIC in Lahore. PHOTO: PPI

Meanwhile, the lawyers observed a complete strike across the province on Thursday, though the provincial government and district administration made unsuccessful attempts to negotiate with them.
The lawyers said they would not negotiate until all of their detained colleagues were set free.

Different lawyer bodies – including LBA, Punjab Bar Association and district bar association – would chalk out a future course of action in a meeting on Friday.

The Punjab government has promised not to spare the lawyers involved in the attack, saying it would not give in to pressure from bar associations to withdraw the cases registered against the rioters.

“There will be no concessions [for the attackers]. The government will make sure of that,” Provincial Law Minister Raja Basharat said at a news conference on Wednesday. “All lawyers and others identified in the video footage of the attack will be prosecuted,” Basharat added. 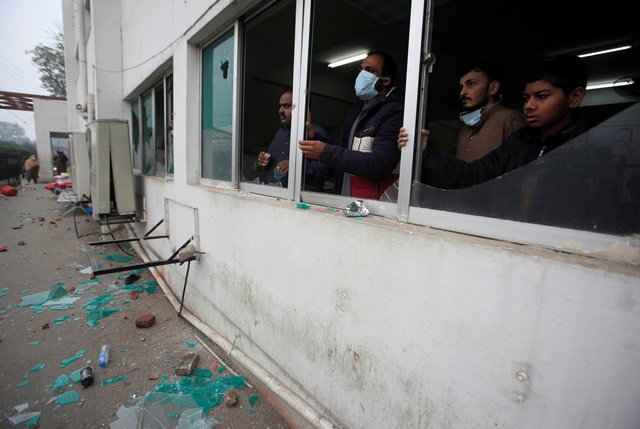 Men stand as they look outside from a broken window of PIC. PHOTO: REUTERS

Prime Minister Imran Khan has already ordered an inquiry into the incident while directing the provincial government to take stern action against all those involved in the attack.

Provincial Information Minister Fayyazul Hassan Chohan – who also roughed up by lawyers when he reached there to mediate – pointed an accusatory finger at the opposition PML-N for instigating the rioting because it was “conspiring to create lawlessness in the province”.

Meanwhile, the Grand Health Alliance, comprising young doctors and paramedical staff, said they would observe black day for three days against the attack on the PIC which wore a deserted look on Thursday. 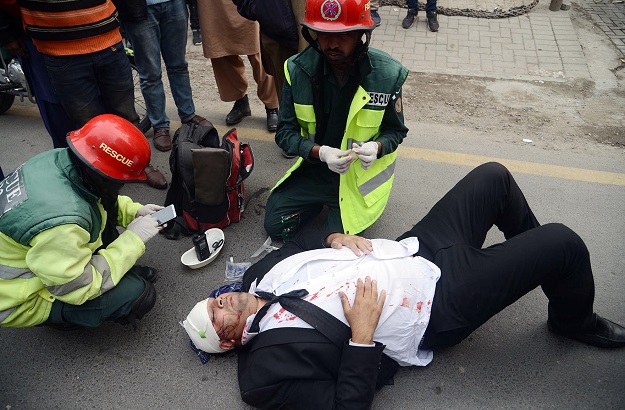 Rescue workers giving first-aid to an injured lawyer after a clash between doctors and lawyers at PIC. PHOTO: ONLINE

Security staff and administration officials were present on duty while a trail of Wednesday’s rampage, including damaged furniture and equipment, and broken window glasses, was visible everywhere.
Provincial Health Minister Dr Yasmeen Rashid visited the hospital Thursday morning and held a marathon meeting with the administration and senior doctors. 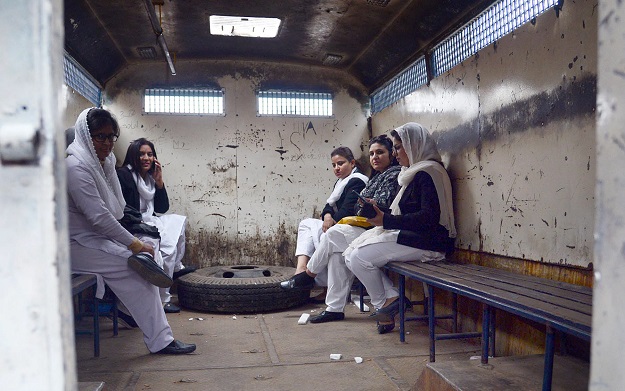 Women lawyers sitting in prison vans after police arrested them during a clash at PIC. PHOTO: ONLINE

According to sources, the minister asked the staff to go back to work, but they excused saying they won’t until “security at the facility was beefed up and all the lawyers involved in rioting were arrested”.

Another round of talks is expected sometime in the night.
The provincial government has deployed paramilitary Rangers at important buildings of Lahore in view of the fluid security situation in the provincial metropolis. 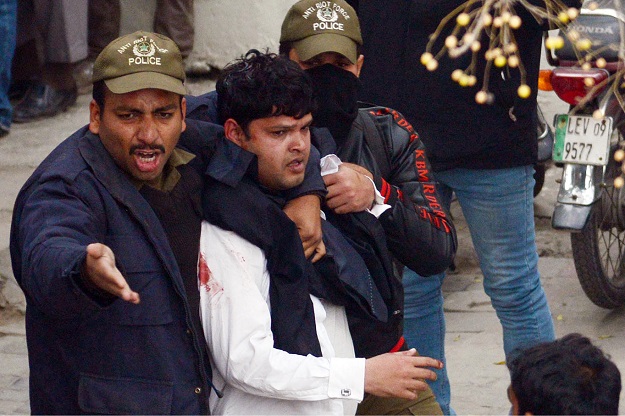 On Wednesday, the home department had recommended deployment of 10 platoons of Rangers at different places to maintain law and order. The buildings where the deployment has been recommended include Governor House, PIC, Punjab Assembly, Punjab Civil Secretariat, Supreme Court (Lahore Registry) and Lahore High Court.