Sindh’s streets of poison: The (bloody) writing on the wall

Sindh’s streets of poison: The (bloody) writing on the wall

RATO DERO: In April 2019, news of a Human Immunodeficiency Virus (HIV) outbreak among children shocked the world. Most had never even heard of Rato Dero – a small town with a population of 0.33 million according to the latest census, located 30 kilometres to the north of Larkana. But that was before it gained notoriety for being the epicentre of an HIV epidemic. Many couldn’t fathom how children as young as a few months old could be infected by a virus that is commonly associated with sexual transmission.

As the saga unfolded, all eyes were set on Dr Muzaffar Ghangro – the doctor believed to have infected almost 900 children by injecting them with the virus. Dr Ghangro has since denied the charges, but admitted that he reused syringes in many of the cases. 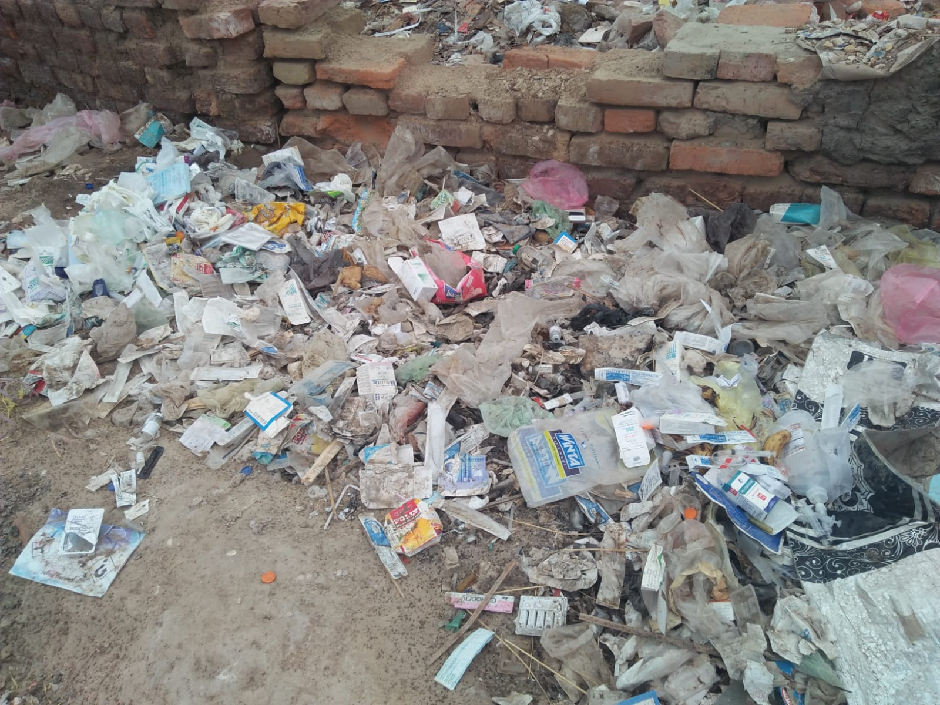 In the days that followed the outbreak, aid organisations and the world media converged upon the small town, the former trying to make sense of the epidemic and the latter trying to tell the world about it.

The provincial and federal governments too jumped into the fray – promises were made and orders were issued. Ministers scurried to Larkana, where many of the patients were brought after the screening, looking for photo-ops with the parents, who barely understood the gravity of the situation. Many had never even heard of the term HIV before.

As the months passed, the world became obsessed with other important matters and soon enough, the residents of Rato Dero were all but forgotten.

Today, the situation has turned to normal. And normal is dangerous in Rato Dero.

Dr Ghangro’s clinic, the Konain Child Medical Centre, is located in Nano Mal Mohalla, at one end of a busy marketplace in the middle of Rato Dero. The area is teeming with hawkers and customers during the day. At night, it is the fiefdom of stray dogs and drug addicts, scavenging for food.

Since the news broke out in April, Dr Ghanghro’s clinic and his pharmacy next door have been ‘sealed’. A rusting padlock rests against the handle of the metal shutter at the entrance. A large billboard, featuring a child’s caricature and the name, “Dr Muzaffar Ali”, give away the site’s identity.

Walk in any direction from Dr Ghangro’s establishment and you will find at least a dozen such ‘clinics’ and pharmacies in the surrounding streets. Most of the clinics are shabby-looking one-room establishments, with several patients waiting in line to see the doctor. The clinic themselves look like they haven’t received a fresh coat of paint in decades and smell of urine and vomit. 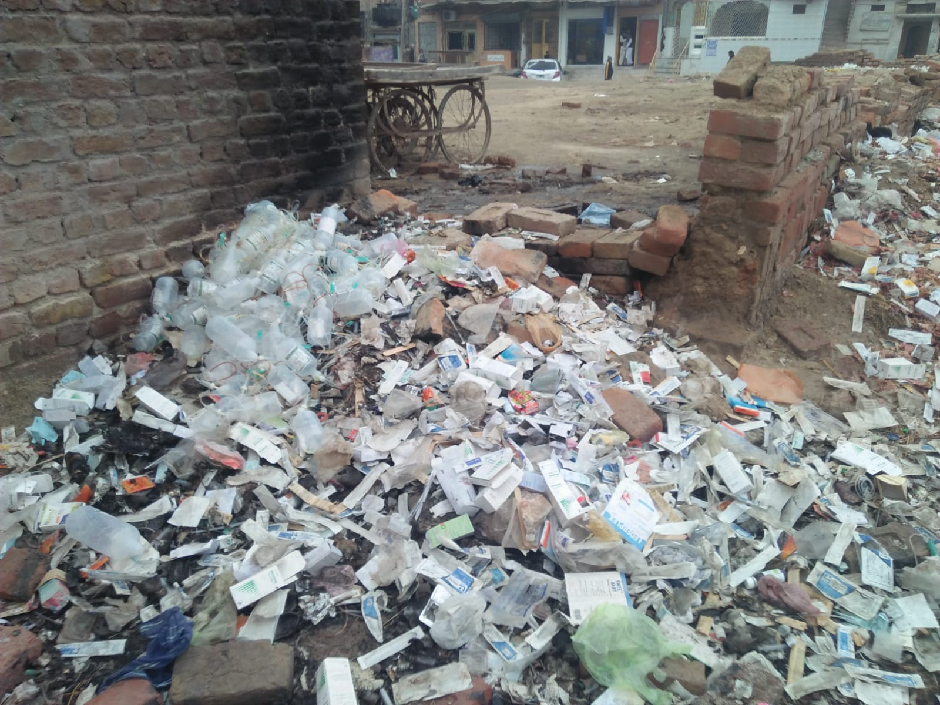 But you don’t even need to see the establishments to realise the abundance of these ‘medical facilities’. If you simply glance around the unpaved streets, you will notice plenty of used syringes and other medical waste being kicked around by passersby.

At the centre of the marketplace is an empty plot. Here is where most of the waste is dumped. When The Express Tribune visited this plot, hundreds of used syringes, along with the sharp needles, cannulas, blood bags and empty medicine containers were lying in the plot. 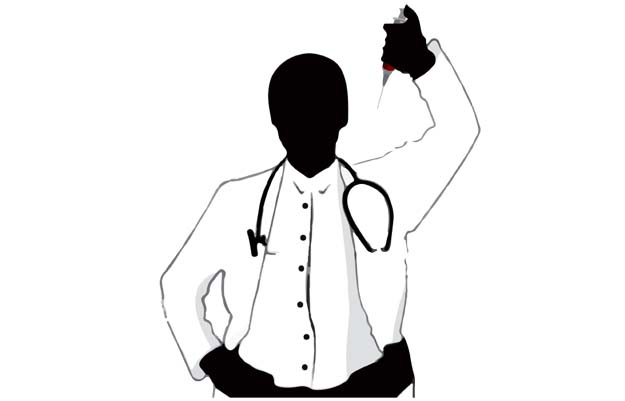 A young boy, hardly 10 years old, with a schoolbag hugging his back, entered the plot and picked up a syringe. “I am just playing,” he says, frightened at having been caught in the act. “Uncle, I don’t take them home,” he tries to explain. “I promise I won’t touch them again,” he pleads, before throwing the syringe and running off.

Shahzado Qureshi, who was sitting at a roadside tea stall opposite the plot, told The Express Tribune that children often pick up the syringes on the way to school or back to play with them. “I keep telling these doctors not to throw their waste here but no one pays any heed,” he exclaimed, raising his hands into the air in desperation. “Sometimes, when the pile of waste becomes too much, I burn it, but that too is dangerous,” he explained.

Shopkeepers in the area refused to be interviewed but some did say the practice had been ongoing for the past several years. At least one shopkeeper, who abstained from giving his name, said that the clinics stopped dumping waste on the plot for some weeks after news of the HIV outbreak. “When the officers stopped visiting Ghangro’s clinic, everything returned to normal.”

In the meantime, a young man came to dump some garbage at the plot. Asked about his identity, he refused to give his name but said he worked as a compounder at a nearby clinic. “I am only throwing away the garbage I collected during the morning cleaning,” he retorted. “We destroy the waste at the taluka hospital’s incinerator,” he added.

The ‘incinerator’ he referred to is basically a large stone compartment that is fired from the bottom and releases smoke from a long iron chimney. It is placed in the Rato Dero taluka hospital and is at best a makeshift apparatus for burning harmful waste. Hospital staff refuted the compounder’s claim and said that no clinics sent their waste to be disposed of to the facility.

The Express Tribune spoke to at least half a dozen doctors at their clinics and none of them admitted to throwing the medical waste in the streets or on the plot. “I hardly use 20 syringes a day and we don’t throw them outside,” said Dr Ikhtiar Ali Mangi, standing in the middle of a 40-foot-long room that was partitioned in the middle with a cardboard wall. The clinic was packed with patients, mostly women and children from nearby villages. 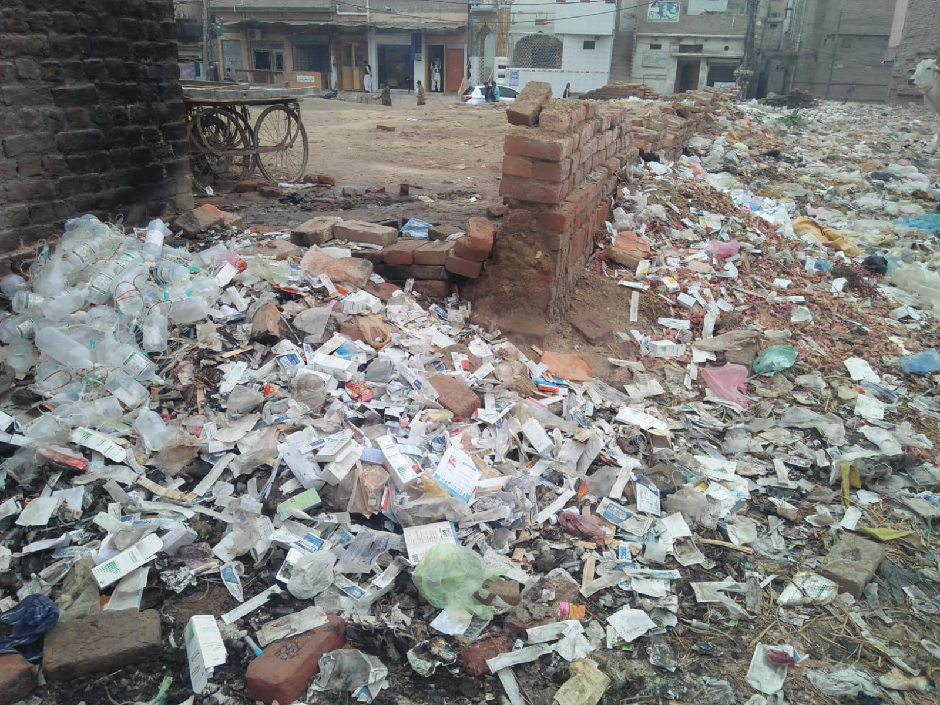 Meanwhile, residents of the area complained that the clinics threw out their waste in the streets without any fear of the authorities. “There is no check on them,” said Himat Ali Jalbani, a social worker. “I am visiting this area after a couple of months and am shocked to see the needles and blood bags lying around,” he added.

Back in April, with the world media focused on Rato Dero, all government agencies had gone into overdrive to control the situation. There was talk about action against quacks, incinerators were to be installed and made functional at all hospitals, awareness sessions were arranged and political leaders left no stone unturned to ensure they came out as the good guys.

In the chaos that ensued, it seems everyone forgot the underlying problem — that there is no mechanism to check how much medical waste is being produced in the province and if it is being disposed of in the safest way possible.

Of all the public hospitals in Sindh, only five teaching hospitals have standard operating procedures to dispose of waste using scientific methods, including sterilisation and incineration. These hospitals include the Jinnah Postgraduate and Medical Centre, Dr Ruth Pfau Civil Hospital and Lyari Hospital in Karachi, and Liaquat Hospital and Benazir Bhutto University Hospital in Larkana.

In 2005, the Sindh government crafted rules regarding the scientific disposal of medical waste, while in 2012, the rules were amended under the Environmental Protection Act of 1997. According to the rules, medical waste must be dumped in secure places according to scientific techniques. The irony is that most medical facilities don’t even know that such a law exists, let alone take steps towards its implementation.

When approached for comment about the prevalent situation in Rato Dero, Dr Sikandar Memon, the head of the Sindh AIDS Control Programme, held the doctors at private clinics responsible. “We have sensitised over 200 doctors who run their private clinics about the need to dispose of their waste properly and shut down 265 such establishments across Larkana district for not following the law,” he said. 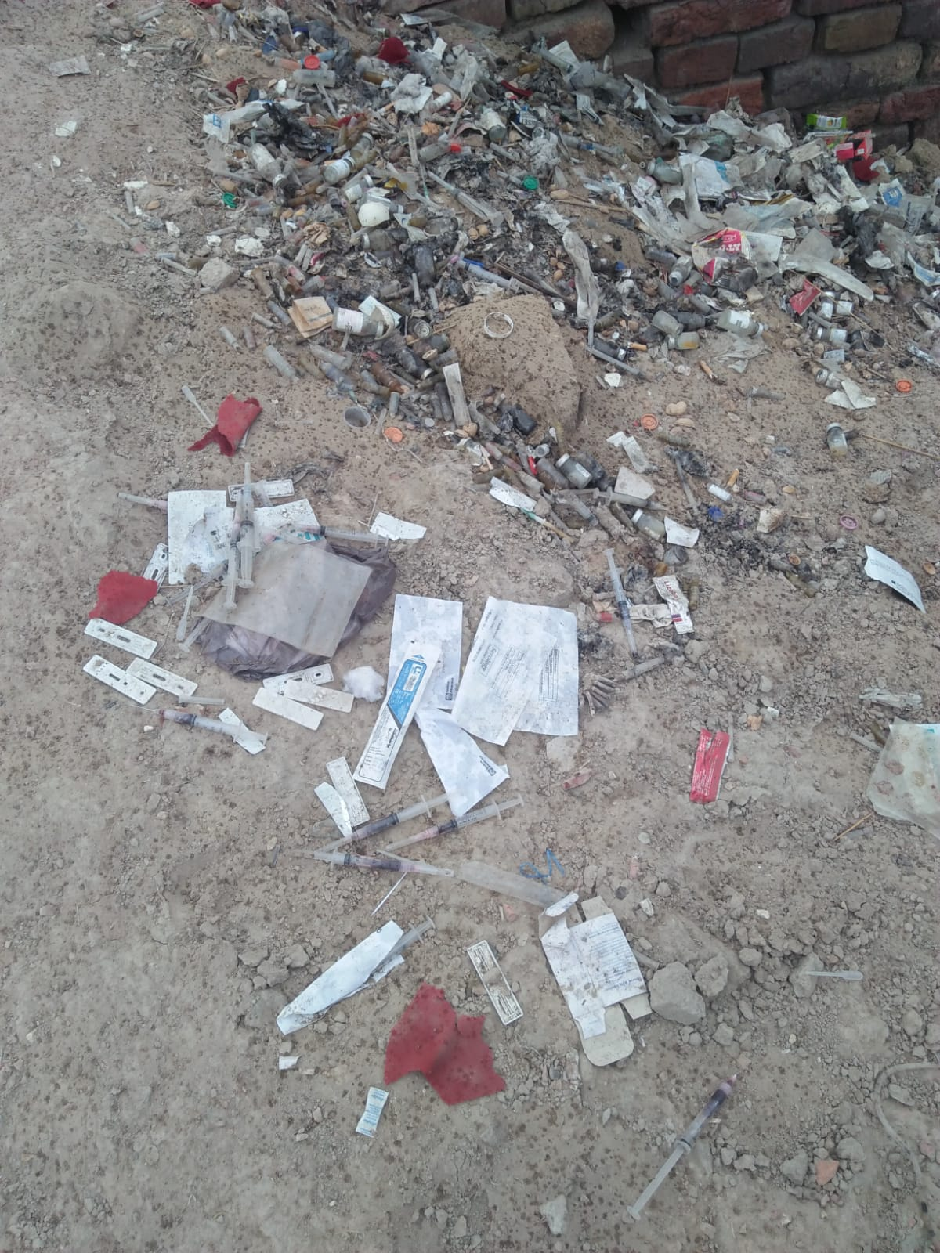 Rato Dero is located at hardly a half-hour’s drive from Larkana city – a bastion of the ruling Pakistan Peoples Party (PPP). It is the constituency of PPP chairman Bilawal Bhutto, who has been elected on the National Assembly seat from the area. It is also the constituency of his aunt, MPA Faryal Talpur.

The irony is that the issue is not just limited to Rato Dero. It is endemic across the province and in the absence of a mechanism to check the disposal of medical waste, there will likely be several more epidemics like the one earlier this year.