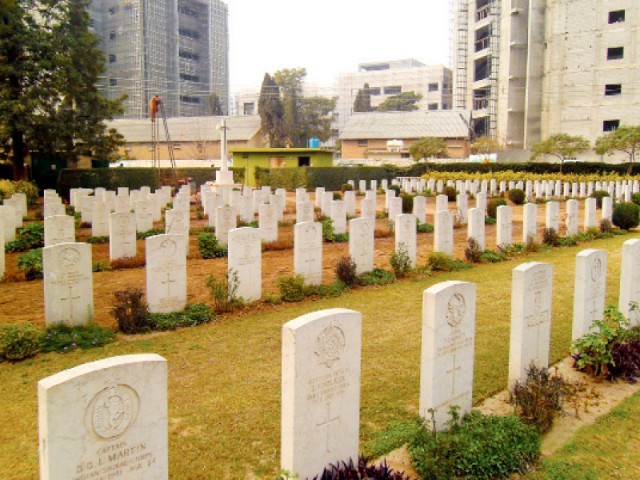 Neatly-lined graves of soldiers in the war cemetery corner (top) an insignia on a tombstone (left) and weed thick area of the graveyard. PHOTO: EXPRESS

KARACHI: On June 30, 1912, Phyllis Louis, wife of the then Karachi collector, Staveley Lawrence, died in a tragic accident while travelling in a horsedrawn carriage. Following Loius’ death, Henry commissioned the construction of a tomb in Karachi’s Gora Qabristan – a Christian cemetery – where she was laid to rest.

Today, Louis is soundly asleep in the cemetery, among many others, as drug addicts, encroachments and garbage piles continue to mire her six-pillared, once pristine white, marble tomb. And seemingly, the government too hasn’t lost sleep over the plight of the forgotten graves of the historical British-era graveyard.

The problem runs deep in history The tale of Gora Qabristan’s sorry state began way back, right after the creation of Pakistan in 1947. The country saw a huge influx of migrants at the time of its independence and a majority of them chose to settle in Karachi, considering the metropolis apt for restarting their lives.

Many of these migrants were allotted land for residence adjacent to Gora Qabristan. Over time, the boundaries of these residential plots extended and encroached upon the graveyard’s land, which presently serves as a safe haven for drug addicts and stray dogs. Moreover, Louis’ place of rest too suffered in the aftermath of the development.

The tomb, which had remained intact till the time of the independence of Pakistan, lost its glory and beauty, marred by the continual and gradual illegal acquisition of the cemetery’s land.

A failed attempt at restoration nevertheless, though insufficient and scant, measures have been taken in the past to preserve the graveyard, mainly against encroachments.  In a failed attempt to prevent the invasion of the historical graveyard, the initiative to erect a boundary wall along the cemetery’s periphery was taken when Mustafa Kamal was Karachi’s mayor.

At the same time, Louis’ tomb, too, was renovated and its white marble was replaced with cream-coloured marble.  However, restoration efforts did little to halt the encroachment as a large part of Gora Qabristan was already occupied by then and besides graves, it housed quite a few multistorey buildings. The efforts proved futile and it was not too long before the cemetery was again invaded by menaces like encroachments and garbage.

In ruins Presently, the graveyard is virtually abandoned by the Sindh government and the district administration and the graves – those that remain despite the unwanted incursions – present an ugly sight, buried under piles of garbage and dirt.

According to the cemetery’s supervisor, Sarfaraz, the graveyard serves as the dumping ground for waste from nearby neighbourhoods. He lamented that despite multiple requests to refrain from littering the cemetery, the residents continue to dump garbage in the graveyard.

“We have requested them time and again to not to dump garbage here [in the graveyard] and respect its sanctity but they pay no heed,” he said. Sarfaraz claimed that the graveyard’s administration takes all possible measures to ensure that it is kept clean but garbage continues to accumulate.

The supervisor further complained that the cemetery is used as a passageway by the residents of nearby localities and a playground by the children. He also pointed out that the cemetery’s boundary wall is in a derelict condition and said that letters have been written to the provincial government and the district administration, requesting them to reconstruct the boundary wall. “However, we haven’t received a reply from either of them yet,” he said.

Akin to the rest of the graveyard, Louis’ tomb too is suffering the same fate of destruction and ruination. Once the tallest structure in the space, it is today lost amid a maze of illegal structures strewn across the graveyard’s land. In the day, it can be seen littered with garbage heaps and at night it serves as a drug addicts’ den. And yet, like Louis, the relevant authorities continue to slumber in the midst of the silent obliteration of the house of the dead.