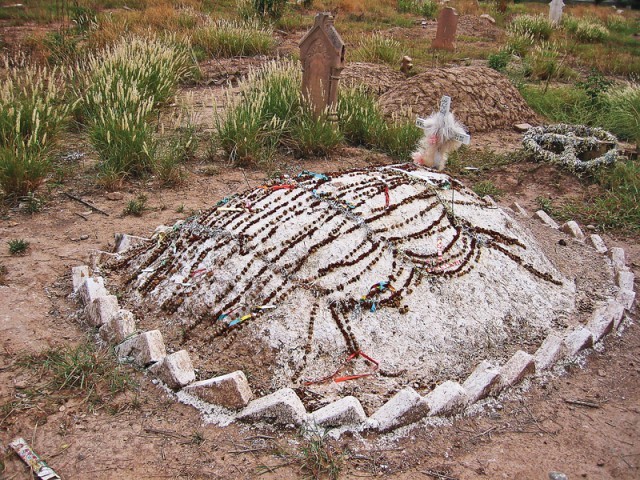 One of the relatively new graves in the cemetery. PHOTOS: RIAZ AHMAD

Gora Qabristan or the British cemetery in Peshawar is the sole survivor of three Victorian graveyards in the city. Buried in layers of dirt, nestled in deeper than the bones, the necropolis contains clues to the past – more specifically, to Colonial India.

And these secrets will be pushed deeper underground as and when locals need to bury their dead. The remaining tombstones reflect a state of decay, as centuries-old graves and their iconic tombstones fall apart due to disrepair. Not much action is taken to preserve these structures. Less than a few dozen tombstones and grave sites from the British era remain; most of the site has been taken over by freshly dug resting places. Christians of the city started burying their dead here almost two decades ago. Many of the old graves were bulldozed and new bodies were buried, and in that cycle, the stories of the people of old who lived and loved, and created Peshawar were also erased.

At this pace of what can at best be described as a morbid turnover, in another decade, these historic monuments will be lost to the city forever.

The polyglot of Peshawar

One of the surviving graves still in a presentable condition belongs to Isadore Loewenthal who died in the year 1864. As the inscription on the stone goes, Loewenthal was shot by his gatekeeper in Peshawar.

Loewenthal was one of the more prominent Christian scholars and missionaries in British India. He learnt a local dialect of Pashto and preached the religion in the markets and villages of Peshawar. Loewenthal was not only known for having mastered classic European languages and his proficiency in others, including Persian, Urdu, and Arabic; he also translated the New Testament into Pashto.

It is said Loewenthal was so committed to his mission – introducing Christianity to the region– that in all probability this commitment led to his death at the hands of his own domestic help.

The grave of this remarkable man has survived the encroachment most likely due to his religious achievements. His tombstone bears the inscription, “Rev Isidore Loewenthal, of the American Presbyterian Mission who translated the New Testament into Pashto, was shot by his Chokeydar, April 27, 1864.”

This inscription is also written in Pashto and Persian on his grave but the text is so worn that it needs close inspection to decipher.

Memorials of love and loss

There is a memorial at Gora Qabristan which, according to local legend, marks the death of members of a British regiment. Other mass burials also took place in the cemetery and monuments were erected to mark them but few of them have survived the onslaught of time.

Talking to The Express Tribune, Peshawar expert Humyun Akhund said, it is most unfortunate that centuries-old graves were being replaced with new ones.

“This graveyard was established around 1849 and many famous soldiers, missionaries and British officers were buried here.” Many of the burial sites have disappeared, he argued, because locals were destroying the older graves to bury their dead.

“It is of utmost importance that tombstones of historic graves should have been handed over to the Peshawar Museum for preservation; sadly too many of them have been broken to pieces and thrown away,” said Akhund.

“It is a historic monument which was well preserved for decades after the independence but now our people do not care about it and indeed they are responsible for the destruction,” he said.

There were two other Victorian graveyards – one in Nishtarabad and the other inside Bacha Khan International Airport, he explained. “It is time to save Gora Qabristan as this place is considered a tourist attraction…its loss will be a national one.”

Akhund suggested the government should provide another piece of land to the Christians for their burial and this Victorian cemetery should be declared an archaeological site to save it.

When contacted, a Christian leader, requesting anonymity, stated these reports about new graves encroaching on old ones are baseless. “Old graves are disappearing because of age and neglect.”

Peshawar has several Christian burial grounds which are also fast running out of space. After the All Saints Church blast in September 2013, a portion of Gora Qabristan’s boundary wall had to be torn down to accommodate the arrival of hearses. Around 51 graves had been dug in the cemetery but only 23 deceased persons were laid to rest there.