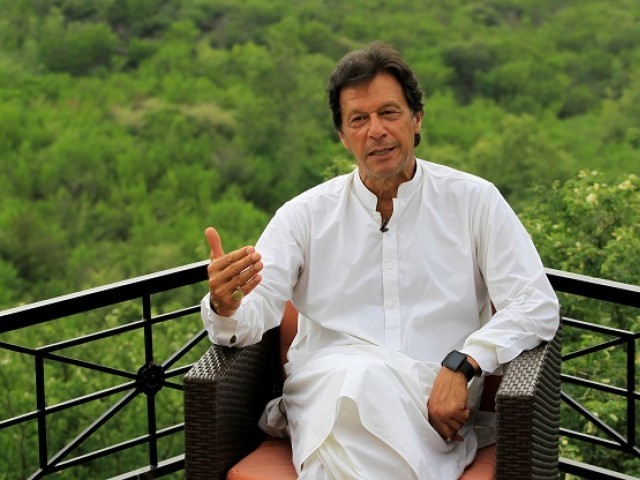 PM Imran Khan speaks with a Reuters correspondent during an interview at his home in the hills of Bani Gala on the outskirts of Islamabad, Pakistan. PHOTO: REUTERS/FILE

ISLAMABAD: After a rollercoaster few months, embattled Imran Khan, for the first time since assuming the office of the prime minister, has finally decided to take a break – albeit a brief one of just two days.

The premier has cancelled all his official engagements on Saturday and Sunday he will spend time with his family. He will also keep PTI affairs at bay during his downtime and his Bani Gala residence will not be hosting any party meetings.

Although the prime minister has had it rough from the outset of his tenure, immediately facing the daunting task of steering the country out of an economic crisis and the Kashmir dispute taking a turn for the worse, not to mention the flood of criticism that has come his way.

However, the past month or so has been exceptionally gruelling with the firebrand cleric Maulana Fazlur Rehman, the head of the Jamiat Ulema-e-Islam-Fazl, launching an anti-government movement backed by other opposition parties.

The Maulana, along with thousands of his followers, marched on the federal capital on Oct 31 and staged a sit-in for 13 days demanding the prime minister’s resignation until bringing his grand show to an abrupt end and moving on to ‘Plan B’ of his ‘Azadi March’ campaign.

The other factor that could have taken its toll on the premier’s nerves was the health of incarcerated former premier Nawaz Sharif suddenly deteriorating to a life-threatening level.

With a medical board formed by the government itself declaring that there were no options left but to send the ailing Sharif family patriarch abroad for treatment to save his life, PM Imran, whose entire narrative is built around an uncompromising accountability process, had to make a choice, which in his own words, was based on humanitarian grounds despite many criticising him for ‘striking a deal’.

A day earlier, army chief Gen Qamar Javed Bajwa called on the prime minister and discussed matters concerning internal security. The civil and military leadership is likely to have touched upon burning issues and hammered out a future strategy.

Also niggling at PM Imran’s mind must be the soaring prices of essential commodities, food items in particular and the growing resentment it is causing among the middle- and low-income strata of the population.

The finance adviser’s tomato price gaffe did not help matters, producing a great deal of ‘ketchup’ for TV channels and social media to smear all over the government.

The prime minister will return from his brief time-out with a meeting of the federal cabinet he has convened on November 19. The cabinet will discuss the political and economic situation and consider a seven-point agenda.

It will approve the National Tariff Policy and cabinet members will also be presented with a report on filling top posts in different divisions and ministries.

The cabinet will approve the appointment of the federal insurance ombudsman and the CEO of the Cabinet Engineering Development Board.

The members will also ratify the decisions made during the meeting of the Economic Coordination Committee. The setting up of a cabinet committee for the China-Pakistan Economic Corridor is also on the agenda.