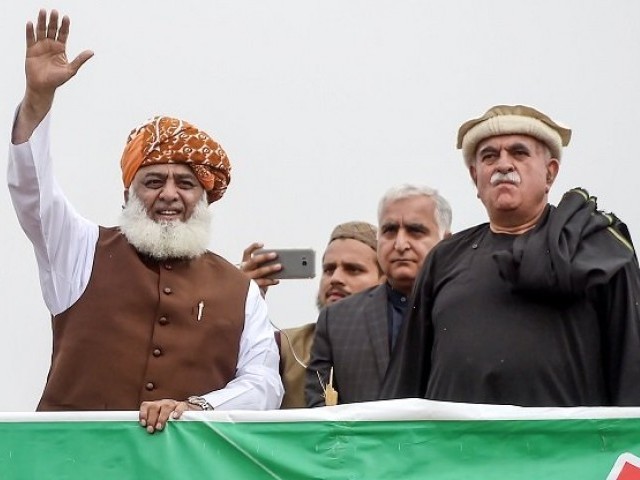 ISLAMABAD: The government’s negotiating team and the joint opposition’s Rahbar Committee were unable to reach a breakthrough on the JUI-F’s Azadi March in their second round of talks on Tuesday with the latter refusing to budge from its demand for the prime minister’s resignation and fresh elections and the former seeking a “middle ground” to end the impasse.

After trading demands a day earlier, the government team, spearheaded by Defence Minister Pervez Khattak, met the opposition’s committee again and presented its recommendations on strengthening the election commission, conducting an investigation into allegations of rigging in the 2018 polls, recounting of votes in certain constituencies and holding elections under military supervision.

The government’s negotiators also suggested that the opposition could seek guidance from the Supreme Court on the effectiveness of the election commission.

Speaking to the media after the meeting, Akram Durrani, the head of the Rahbar Committee, told the media that the opposition was not withdrawing any of its demands.

He added that during the talks on Monday, the opposition had put forth its demands which included the resignation of the prime minister, holding fresh elections, conducting the polls without military supervision and the protection of the constitution.

Khattak, who was accompanying Durrani, said the government was trying to reach a middle ground to break the deadlock.

“We are trying to find a solution where the opposition’s dignity will remain intact and the government will also be able to preserve its position,” he added.

Punjab Assembly Speaker Pervaiz Elahi, who is a member of the government team, told reporters that he was optimistic about the two sides reaching an understanding.

“I am hopeful that the talks will be successful but it will take time,” he added.

He further said the opposition’s demand for resignations would be discussed later.

During the talks, the government expressed its willingness to restore the parliamentary committee formed to investigate allegations of poll rigging, sources said.

The Rahbar Committee suggested that the parliamentary committee should be able to exercise absolute powers to proceed with all cases of rigging in last year’s elections.

The government panel maintained that it too wanted a free, fair and independent election commission.

It further argued that the purpose of deploying the military during elections was to ensure security.

The Khattak-led team also assured the opposition that the government would comply with the Islamic provisions of the constitution and could not even consider amending the laws pertaining to blasphemy and the finality of the prophethood.

However, it added, the state could not allow anyone to fan religious hatred and issue fatwas branding someone as an infidel.

The Rahbar Committee requested more time to discuss the government’s recommendations and maintained that its leadership believed the issue could be only resolved through fresh elections.

It also requested that the prime minister should restrain his spokespersons from giving harsh statements against opposition leaders.

Pervez Elahi informed the premier about his meeting with JUI-F chief Maulana Fazlur Rehman a day earlier. He told PM Imran that the Mualana had responded positively during their talks.

Khattak briefed the prime minister about the Rahbar Committee’s demands.

According to sources, PM Imran said he was prepared to accept all “valid” demands put forth by the opposition parties. However, he ruled out accepting the JUI-F’s demand for his resignation.

The premier said the Khattak-led team was fully empowered to negotiate and should respond in a positive manner if the opposition displayed seriousness towards reaching a consensus.

He also lauded the role played by PML-Q leaders Chaudhry Shujaat Hussain and Pervez Elahi in trying to break the government-opposition impasse.

On late Tuesday night, the two PML-Q leaders met the Maulana at his residence again in a bid to end the deadlock.