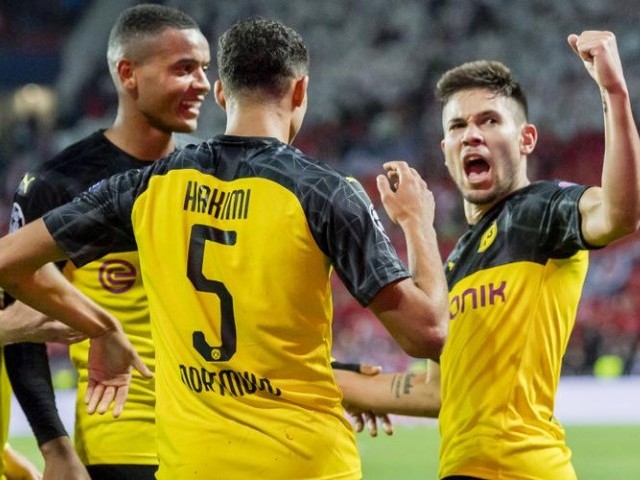 A minute before the final whistle, the 20-year-old Moroccan struck following another strong run and clinical finish. PHOTO: AFP

With 10 minutes remaining in the first half, Hakimi — on loan from Real Madrid — sprinted down the right flank, wove his way through the Slavia defence into the box, fooled ‘keeper Ondrej Kolar and blasted home left-footed.

A minute before the final whistle, the 20-year-old Moroccan struck following another strong run and clinical finish with a low shot across goal to end Slavia’s 24-game unbeaten streak in competitive games.

“He played very well although he’s not used to the position,” Dortmund coach Lucien Favre said of Hakimi, who is a right-back by trade but started on the left wing.

“He is very dangerous up front and we are happy with his performance, the two goals say it all.

“We had drawn the last three games against Barcelona, (Eintracht) Frankfurt and (Werder) Bremen, so we’re happy with the victory today, it was very important for us.”

With prolific striker Paco Alcacer ruled out with an Achilles tendon injury, Dortmund, who had drawn 0-0 with Barcelona at home in their opening game, started without a fully-fledged striker, relying on counter-attacks rather than constant pressure.

Captain Marco Reus started up front alongside Julian Brandt and English teenager Jadon Sancho, who went close with the first shot on goal in the second minute.

Sancho then set up the tireless Hakimi who fired wide, before playing a pass which a sliding Reus narrowly shot past a gaping Slavia goal.

Having reached the Champions League group stage for the first time in 12 years, Slavia, who held Inter Milan to a 1-1 draw at the San Siro in their opener, had a great chance on 20 minutes.

Lukas Masopust collected a pass that left him one-on-one with Roman Buerki, but the Swiss ‘keeper saved his poorly-placed effort.

Slavia’s Romanian midfielder Nicolae Stanciu then saw his free-kick kept out by a diving Buerki and centre-back Ondrej Kudela had an effort blocked by the visiting defence.

“Slavia were a threat throughout the game, they were very athletic, they attacked us well,” said Favre.

Sancho went clean through against Kolar early in the second half, but was denied by the Slavia goalkeeper.

“We played our game against a team like this, we could match them in all respects except inside the box,” he said.

“But the result is disappointing, it’s too little after this kind of game.”