Munich goalke­eper Manuel Neuer said his team were lucky not to lose after RB Leipzi­g held them to a 1-1 draw
By AFP
Published: September 15, 2019
Tweet Email 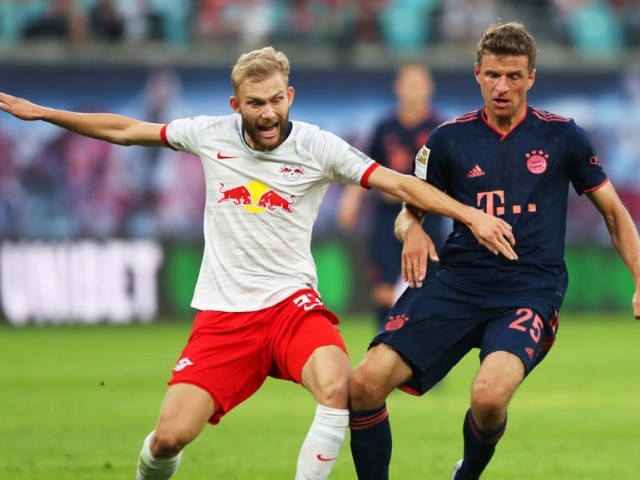 The draw leaves Bayern in third, while Leipzig now sit a point above Borussia Dortmund, who moved up to second with a thumping 4-0 win over top four rivals Bayer Leverkusen earlier in the day. PHOTO: AFP

BERLIN: Bayern Munich goalkeeper Manuel Neuer said his team were lucky not to lose after RB Leipzig held them to a 1-1 draw to stay top of the Bundesliga on Saturday.

In the second of two top-of-the-table clashes on Saturday, Leipzig survived a first half onslaught and equalised through an Emil Forsberg penalty to frustrate the Bayern and fuel hopes of a three-horse title race in the German league this season.

“We made too many mistakes in the second half. It could easily have been a defeat,” Neuer told Sky, after making several saves in a thrilling second half.

The draw leaves Bayern in third, while Leipzig now sit a point above Borussia Dortmund, who moved up to second with a thumping 4-0 win over top four rivals Bayer Leverkusen earlier in the day.

“It is too early to call us title candidates, but it is nice to be top of the table,” Forsberg told Sky.

It took Lewandowski just three minutes to grab the opener as Bayern dominated the first half in Leipzig.

Yet despite having had three times as much possession and twice as many shots, Bayern went in at half time with the scores level after Forsberg’s penalty on the stroke of half time.

Bayern, who had themselves had a penalty retracted by VAR ten minutes earlier, were left stunned and allowed Leipzig back into the game after the break.

Both Timo Werner and Nordi Mukiele had chances for Leipzig, and both goalkeepers were forced to make flying saves.

Niklas Suele could have won it for Bayern in the dying seconds, but his bobbling header only grazed the post.

Dortmund were under pressure after a shock defeat to minnows Union Berlin in their last game, but goals from Paco Alcacer, Marco Reus and Raphael Guerreiro secured a much-needed three points for Lucien Favre’s side.

Alcacer, who meets his former club Barcelona in the Champions League on Tuesday, has now scored seven goals in six games in all competitions this season.

“Paco is a fantastic player, he is enormously important for us,” said Dortmund forward Julian Brandt.

Dortmund were denied by a brilliant double save from goalkeeper Lukas Hradecky early on before Alcacer gave them the lead just before the half-hour mark.

Shaking off his marker and beating the offside trap by a whisker, the in-form Spaniard met an Achraf Hakimi cross on the volley to beat Hradecky from close range.

Leverkusen looked the more dangerous side after the break, but Dortmund were more ruthless, and Marco Reus turned in Jadon Sancho’s cross to double the lead on 50 minutes.

Sancho set up Raphael Guerreiro for Dortmund’s third seven minutes from time, before Reus added a fourth in injury time.

Elsewhere, a first-half winner from Alassane Plea saw Borussia Moenchengladbach run out 1-0 winners against Cologne in the Rhine derby.

Eintracht Frankfurt suffered a shock 2-1 defeat to strugglers Augsburg ahead of their Europa League clash with Arsenal next Thursday.

In Berlin, Werder Bremen did what Dortmund had failed to do two weeks earlier by beating Union 2-1.

Bremen’s Davy Klaassen and Union’s Sebastian Andersson converted early penalties in an even first half, before Niclas Fuellkrug headed in the winner for Bremen.

Union’s capital city neighbours Hertha Berlin sit bottom of the table with just one point after a dramatic 2-1 defeat to Mainz.