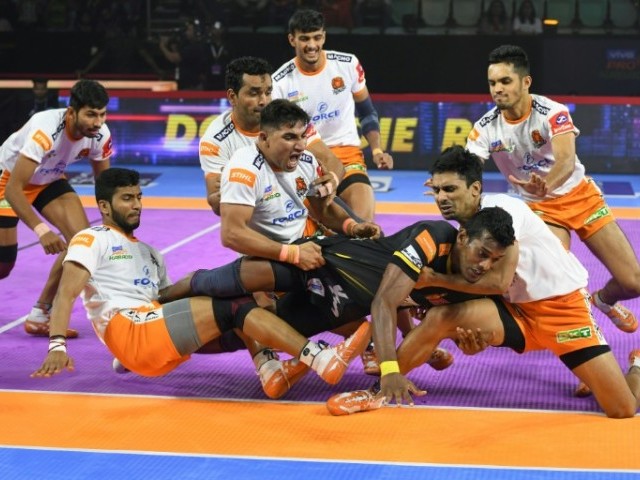 Siddharth and his elder brother Suraj Desai went from playing kabaddi in the dust in their village in the state of Maharashtra, to wrestling on indoor mats in front of a TV audience of millions. PHOTO: AFP

NEW DELHI: Siddharth Desai grew up in humble surroundings but now he’s living the life of a millionaire sportsman, driving a souped-up jeep and taking selfies with fans — and it’s all thanks to kabaddi.

The ancient game has undergone a glitzy makeover through the Pro Kabaddi League (PKL), creating a new group of sports stars in a country traditionally obsessed with cricket.

Kabaddi — which roughly translates to “holding hands” — is a tag-meets-rugby contact sport widely believed to have originated in the South Asian nation thousands of years ago.

Siddharth and his elder brother Suraj Desai went from playing kabaddi in the dust in their village in the state of Maharashtra, to wrestling on indoor mats in front of a TV audience of millions.

“Even if you work for 50 years of your life, you will never get a financial benefit like you do while playing one year of PKL,” the 27-year-old raider, the proud owner of an orange-and-black 4×4 off-roader, told AFP.

“Nobody knew me before season six but now people want to touch me, media wants to interview me. People want to take selfies with me.”

The franchise-based professional league was launched by Star Sports in 2014. Players were auctioned, like in the hugely successful Indian Premier League (IPL) Twenty20 cricket tournament, with businesses and Bollywood stars paying big money players for their city or state-based teams.

Siddharth, who was paid $50,000 last season with U Mumba, was snapped up by Telugu Titans for a record $201,444 this year. Together with endorsements, kabaddi has made him a wealthy man.

The previously shy village boy now dreams of buying a new house where his parents and his married brother can enjoy the finer things in life. 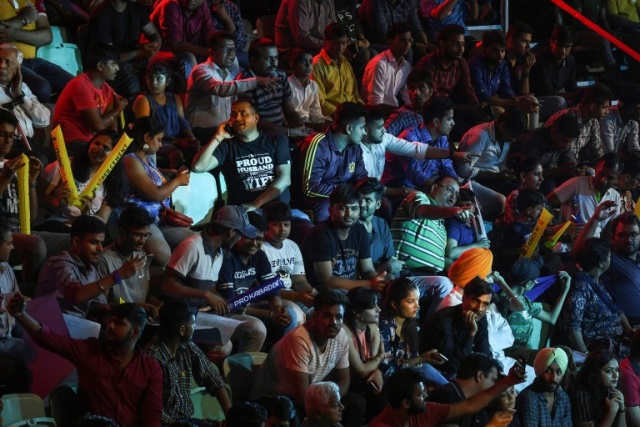 “After the start of Pro Kabaddi everyone is looking at kabaddi at a career option,” said Siddharth. “Now I like to go indulge in my hobbies which include playing the guitar and music. I will probably get a tattoo done.”

Kabaddi is a highly physical sport that requires teams to collect points by sending a raider to the rival side to tag an opponent before returning to safety.

Traditionally, raiders chant “kabaddi, kabaddi” to prove they are only using one breath, although in the modern game they usually breathe freely.

Defending teams can also collect points by preventing the raider from escaping their half of the court, often with body-slamming tackles and vicious ankle-wrenches.

It’s an entertaining sport for TV and promoters have completed the look with slick, Bollywood-style presentation of the competition and players off the court.

Keen to follow the glamorous IPL, PKL’s organisers set about re-vamping the images of the players, who mostly hail from Indian villages.

“We groomed them, got them new haircuts and trained them on how to be on TV,” PKL commissioner Anupam Goswami told AFP.

“We also made sure that the field of play looks slightly aspirational.”

The success of the first few seasons led Chinese smartphone-maker to VIVO sign up as PKL’s title sponsor in a reported $42 million deal.

The tie-up made PKL the second-largest league in India in terms of sponsorship money after the IPL, which also has VIVO as their lead sponsor.

One of the PKL’s foreign stars, U Mumba’s former Iran captain Fazel Atrachali, says the league has given players the chance to have a lucrative career.

“When you have money in your sport then your mind is not busy on other things,” Atrachali told AFP.

Goswami said that, putting aside the massive salaries of top players in sports like basketball or football, annual wages of $100,000 for a kabaddi player are “very respectable”.

“The bottom salary is seven lakh ($9,860 per season) which is a salary of a mid-level occupation in our country,” he added.

While the PKL has prospered, it has been a different story for India’s men’s and women’s international teams who have suddenly hit hard times.

At last year’s Asian Games, India’s men suffered the second and third international defeats in their history — the previous one being to South Korea at the 2016 World Cup — as the seven-time champions missed out on gold for the first time.

Iran, which also claims to be the birthplace of kabaddi, went on to clinch their maiden gold. India’s women also lost to Iran in the final.

It sparked soul-searching among India’s kabaddi hierarchy. But PKL technical director E Prasad Rao said he was confident the problems will be resolved and that India would soon return to the top.