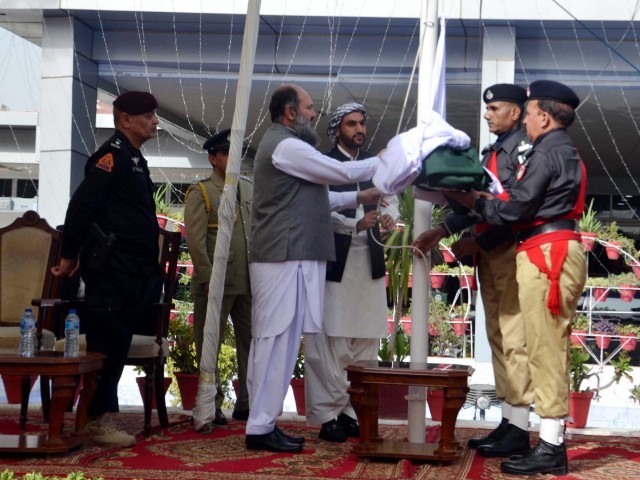 QUETTA: On the country’s Independence Day, Balochistan Chief Minister Jam Kamal said the province stands by the Kashmiris in their just right to self-determination and will continue extending support to them.
“Pakistan has dedicated this [Independence] Day to Kashmiris for their struggle for freedom,” he said while addressing a flag hoisting ceremony in Balochistan Assembly building, Quetta on Wednesday.

He condemned the occupation forces actions in the valley, saying that “India’s actions are becoming dangerous, which will be the cause of downfall of the country.”
“We will continue supporting Kashmiris,” Kamal said.

On Independence Day, he said, “It reminds us about the great sacrifices rendered by our forefathers. Independence is a great gift for nations.”

Countrywide rallies in support of IoK on ‘Independence Day’
He added people belonging to any cast, creed or religion have full freedom in the country and they are free to practice their faith without any restriction, which shows Pakistan honours the rights of minorities.

However, he said in India such rights are not given to minorities.

He said: “Independence Day celebration also reminds us how much we owe to this country, as our lives will be meaningless if we do not contribute in the prosperity of the country. Everyone must play their part in safeguarding the country and making it a better place.”

On the occasion, different programmes and national songs were performed by participants from schools.

Moreover, one minute silence was observed for martyred Kashmiris in the occupied region.

Flag hoisting ceremonies were also held at all the 33 districts of the province.

On August 5, Indian government revoked the special status of occupied Kashmir and rushed through a presidential decree. Home Minister Amit Shah told parliament that the president had signed a decree abolishing Article 370 of the constitution giving special autonomy to the Muslim-majority Himalayan region.