Countrywide rallies in support of IoK on ‘Independence Day’

Countrywide rallies in support of IoK on ‘Independence Day’ 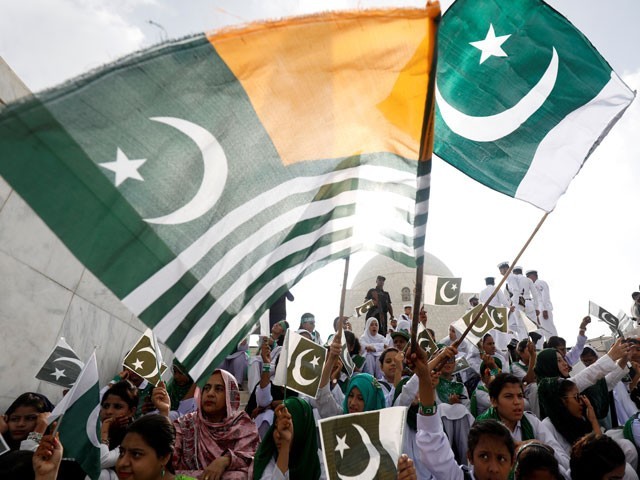 Attendees wave Pakistan's national flag and Kashmir's flag, to express solidarity with the people of Kashmir at the Mausoleum of Muhammad Ali Jinnah in Karachi, August 14, 2019. PHOTO: REUTERS

As the nation celebrates its 73rd Independence Day, rallies were held on August 14 in support of occupied Kashmir (IoK) and against India for its illegal actions in the disputed region.

India revoked the special status of the IoK on August 5 and moved to quell widespread protests by shutting down communications.

The 73rd Independence Day is being celebrated today as Kashmir Solidarity Day to express full support to Kashmiri brethren in their just struggle for the right to self-determination.

The Pakistan Tehreek-e-Insaaf (PTI) organised a rally on Kashmir from Liaquat Bagh in Rawalpindi to D-Chowk in Islamabad today. The rally passed through Faizabad will reach Centaurs Mall and then to D-Chowk.

In South Waziristan, a rally was taken out in solidarity with Kashmir. Participants of the rally were carrying placards and banners inscribed with slogans condemning the Indian atrocities in the IoK.

This #IndependenceDay, let us remind ourselves of the visionary words of Quaid e Azam: Unity, Faith and Discipline. We stand united with the people of Kashmir and their right to Self Determination. 1/2

Pakistan has again reminded the UNSC of this inalienable right that is their duty to protect, in a letter delivered to their President calling for an emergency session on Kashmir. 2/2
#PakistanZindabad#PakistanStandsWithKashmirhttps://t.co/JaiN7EBjFS

This #IndependenceDay we reiterate our resolve to implement Quaid e Azam Muhammad Ali Jinnah’s dream for a peaceful, prosperous & progressive 🇵🇰. We stand shoulder to shoulder with our Kashmiri brothers & sisters in their struggle to exercise their right to self determination. pic.twitter.com/iCN6UIgHxp

Pakistan Muslim League-Nawaz (PML-N) Shehbaz Sharif wanted the day to be dedicated to the Kashmir cause.

In his Independence Day message on Twitter, he said, “Now is the time to take timely decisions on Kashmir and to implement them.”

Judge’s role is that of neutral umpire: SC