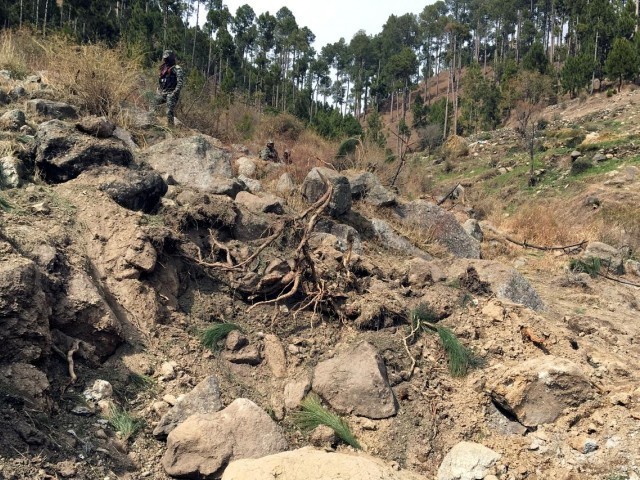 Two Reuters reporters who visited the site of Indian jets' bombings, say up to 15 pine trees were brought down. PHOTO: REUTERS

A top Indian minister said on Saturday that the government would not share proof that “a very large number” of militants were reportedly killed in Balakot air strikes on February 26, after doubts were raised that there were any casualties in the attack that stoked tensions between the two nuclear-armed countries.

On February 26, Indian fighter jets carried out air strikes in Balakot are on what the Modi administration alleged were ‘militant camps’. Islamabad denied any such camps existed, as did villagers in the area when Reuters visited.

Two Reuters reporters, who visited the site of  the bombings, said that up to 15 pine trees were brought down instead.

According to Pakistan, Indian bombs hit a largely empty hillside without hurting anyone. Some Indian opposition leaders have asked the Modi government to share evidence of the air strikes.

“There was neither any compulsion nor any pressure to release the Indian pilot. Pakistan does not want regional peace to be put at stake for the sake of [Indian] politics,” Foreign Minister Shah Mehmood Qureshi said while addressing a news conference on Saturday, a day after Pakistan freed the IAF pilot.

However, the latest act of aggression by India came a day after the release of the pilot.

According to the Inter-Services Public Relations (ISPR), the situation is ‘relatively calm’ along the Line of Control (LoC) after heavy exchange of fire between Friday and Saturday night.

Tensions escalated between Islamabad and New Delhi after the February 14 suicide attack in which a young man – a native of occupied Kashmir – rammed an explosives-laden car into an Indian paramilitary convoy, killing over 40 personnel in Pulwama district.

Following the Pulwama incident, the IAF fighter jets violated Pakistani airspace near LoC and were chased away by Pakistan Air Force (PAF) jets on February 26.

Living up to its promise to ‘surprise’ India. the very next day PAF fighter jets shot down two Indian warplanes and captured the IAF pilot after they intruded into its airspace while responding to a Pakistani aerial mission on targets inside occupied Kashmir.