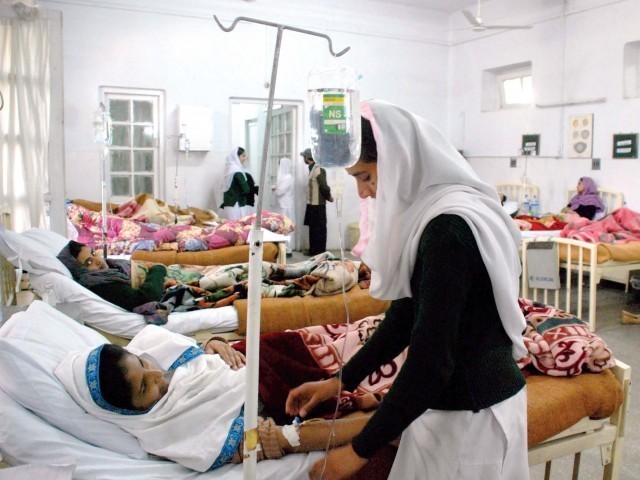 RAWALPINDI: The dengue virus has been confirmed in eight more patients in the Allied Hospitals within the past 24 hours.

Dengue virus patients have been moved to the quarantine wards set up in the state-run hospitals of the garrison city.

The department of health and the city administration are facing a dire situation with the spike in dengue cases.

According to health officials, the number of patients with confirmed dengue virus stands at 125. At least 57 of them belong to Islamabad and they were shifted to Rawalpindi from Islamabad.

Dengue has been confirmed in 51 citizens of Rawalpindi so far. Four dengue patients belong to Attock, while four are from to K-P, five from AJK and three were expatriates who had come home only to be bitten by dengue infested mosquitoes and land in hospitals.

Among the three expats locked up in quarantine wards, one was from Jhelum, and the other two were from Sargodha and Chakwal.

During the current season, .a total of 639 people were admitted to hospital on suspicions of dengue and a report has been prepared.

On the other hand, environmentalists watching dengue causing mosquitoes’ life-cycle said that the only hope is winter.

Presently the average temperature is 17 degrees Celsius, when it drops to 14 degree Celsius the dengue mosquitoes will die naturally.

The Allied Hospitals administration has said that as long as the threats from dengue persist, the dengue counter and quarantine wards will be maintained.

Social Welfare Department on Wednesday held a walk to create awareness among the general public about the dangers of dengue fever. People from different walks of life including staff of social welfare and students of different institutions participated in the walk which started from Dhoke Syeda Chowk and culminated at Barf Khana Chowk.

The walk participants were carrying banners and placards highlighting the importance of taking precautionary measures against dengue virus, urging the citizens to maintain cleanliness in and around their homes.

Speaking on the occasion, Deputy District Officer Nabeela Malik said it was the responsibility of every citizen to play their role in controlling dengue and protecting residents from this dangerous disease by adopting all precautionary measures by ensuring that stagnant water is not around.

She further said that the government cannot fight against dengue individually without public support. The public will have to stand shoulder to shoulder with the government, she added.

With additional input by APP