Global climate protests peak in US as UN talks falter

Global climate protests peak in US as UN talks falter

Tens of thousa­nds of people demand­ed that govern­ments step up action on global warmin­g
By AFP
Published: September 9, 2018
Tweet Email 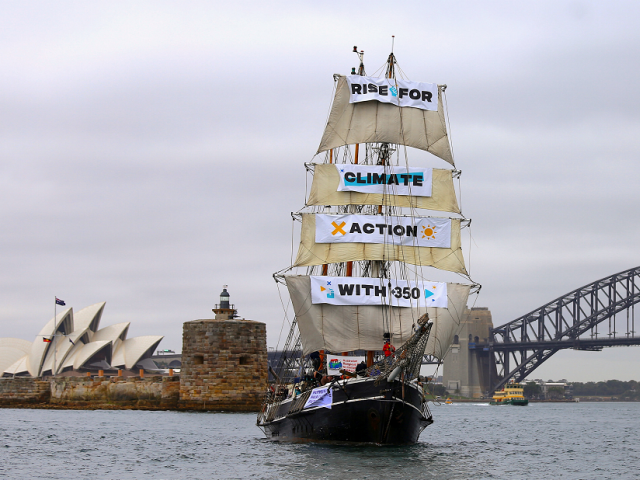 SAN FRANCISCO: Tens of thousands of people across the globe took to the streets Saturday to demand that governments step up action on global warming, even as United Nations climate talks tasked with breathing life into the Paris Agreement faltered.

Nearly 1,000 events in more than 90 countries delivered a two-pronged message: speed up the shift to a world powered by renewable energy rather than planet-warming gas, oil and coal; and protect the people most vulnerable to rising seas and climate-enhanced extreme weather.

The rolling, 24-hour protest peaked in San Francisco, where thousands snaked through the city chanting and carrying handmade signs and banners.

Many slogans were barbs from the heart of Blue America pointed at Washington.

“Defend democracy: impeach Putin’s poodle,” read a third, taking aim squarely at US President Donald Trump, who opted out of the landmark 2015 Paris climate treaty and has moved aggressively to dismantle the climate policies of his predecessor, Barack Obama.

California–by some estimates the fifth largest economy in the world– has committed ambitious goals for slashing carbon dioxide emissions over the next three decades.

Governor Jerry Brown leads a coalition of sub-national regions and cities also taking aggressive climate action. Many will be represented next week in the port city at the Global Climate Action Summit.
But within his own state, Brown has come under attack for allowing the continued extraction of natural gas and oil under his watch.
In France, up to 115,000 people turned out in what may be the country’s largest environmental demonstration.

Clemence Dubois, the France campaigner for 350.org, an umbrella organisation for climate activists worldwide called the march “proof that citizens are ready to demand commitments from our elected officials.”

A “catastrophic summer” of heatwaves and wildfires across the northern hemisphere made many people realize that climate change is already upon us, she added.

“Extreme weather is threatening our children. The only way to protect our future is ambitious #ClimateAction now,” he tweeted.

Extreme weather is threatening our children. The only way to protect our future is ambitious #ClimateAction now. https://t.co/vy2TbK5sUe

Dozens of Thai fishermen and laborers whose livelihoods are threatened by rising sea levels kicked off the day of protests in Bangkok at the site of the UN climate talks.

The Paris treaty enjoins nations to cap the rise in global temperatures at “well below” 3.6 degrees Fahrenheit (two Celsius), and promises $100 billion per year from 2020 in climate finance to the world’s most vulnerable nations.

But sharp divisions between rich and developing countries– especially over money–have deadlocked the technical talks, tasked with hammering out a draft “rule book” that ministers and heads of state can push across the finish line at a UN climate summit in December.

More than 10,000 people turned out in Danish capital Copenhagen, police there said, while 1,300 rallied in front of the European Parliament in Brussels.

“The idea was to challenge the elected officials and governments in the European capital,” said teacher Kim Le Quang at the demonstration.

“There are a lot of lobbies here and we realize that NGOs do not necessarily have the influence to fight them.”

As part of protests in Australia, a tall ship moved through Sydney Harbour in front of the Opera House as activists on board held up protest signs.

Its billowing sails featured banners that read “Rise for Climate Action with 350,” referring to the advocacy group 350.org that spearheaded the global protest.

In Manila, more than 800 people–including one dressed as a T-Rex holding a “Go Fossil Free” sign–marched through the streets protesting the country’s heavy reliance on coal.

Along with Bangkok, the Philippine capital is projected to be among the world’s urban areas hardest hit by climate change impacts.

“We are among the most vulnerable and we are among those still stuck in an energy system that is backwards,” campaigner Chuck Baclavon told AFP, adding that the government is out of excuses.
Around 10,000 school students and their teachers in northern India tied red ribbons to trees in a call to end deforestation.

Sub-national governments, cities and businesses will gather in San Francisco on September 12 for the three-day Global Climate Action Summit, an explicit counterweight to actions by Trump.

Man, woman strangled to death by husband for ‘honour’