K-E accident: He said, she said, they should pay

K-E accident: He said, she said, they should pay 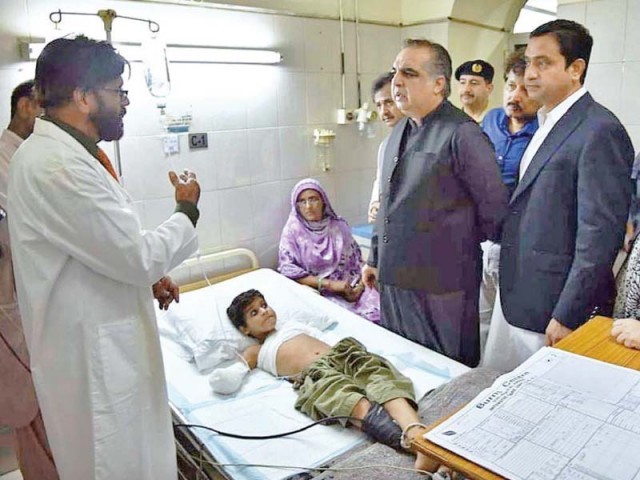 Governor Imran Ismail being briefed at Civil hospital by Dr Ahmer on condition of Haris, who sustained injuries when a wire of 11,000 volts fell on him on August 2. PHOTO: APP

KARACHI: Everybody who is anybody suddenly wants to help Muhammad Umar Arif, the eight-year-old boy who had both his arms amputated after being burned due to electric shocks from a high tension wire.

Sindh Governor Imran Ismail blamed the K-Electric for the episode and directed them to provide monetary support to Umar as well as 11-year-old Muhammad Haris, who met a similar fate near his home in Surjani Town. The K-Electric-Karachi’s only power supply company – says it is ready to extend all possible help for Umar’s treatment. They have yet to acknowledge Harris’ plight.

On Monday, another stakeholder jumped into the fray and pledged that they would provide the treatment. Sindh Chief Minister Syed Murad Ali Shah directed the health department to make necessary arrangements for both the boys who had met a similar fate due to fallen high tension wires.

The CM’s announcement came after the District East assistant commissioner’s report, filed to the deputy commissioner, had held the KE responsible for Umar’s misfortune and suggested that the power utility be made to bear all of the treatment and education costs till he graduated.

The assistant commissioner recommended that the utility provider must pay Rs1million to the affected family immediately. The official also stated that the power company must bear the expenses of Umar’s treatment, prosthetic arms as well as his education until graduation. It also asked the federal and provincial governments to make the child’s future secure through saving certificates amounting to Rs5 million.

The cabinet also took up the issue of overhead cables hanging everywhere in the city. The CM, on the cabinet’s recommendation, constituted a committee under the local government secretary to talk to the relevant authorities to remove all overhead cables of internet, telephone and TV cables. “These cables are not only defacing the beauty of the city but are also creating a nuisance,” the CM said. “Sometimes, they fall on vehicles and sometimes on the road,” he added, before directing the local government secretary to seek help from the Karachi Commissioner to get the cables removed.

Earlier, Governor Ismail, flanked by other party lawmakers, visited the two victims at the Civil Hospital Karachi’s Burns Ward to inquire about their health. Speaking to media during his visit, the governor said that KE had been warned of strict action if it did not take immediate steps to facilitate the victims. The KE earns billions of rupees from the city and will not be allowed to walk away scot free after the incident, he said.

Leader of the Opposition in the Sindh Assembly, Haleem Adil Shaikh, who was accompanying Ismail on his visit, said that only when the media raised the issue of these children did the police came into action. “We do not know who these people are whom the police have apprehended,” he said, before demanding that an FIR be registered against the KE’s managing director. He confirmed that the KE’s officials had started a vendetta and the supply of electricity in half of his area had been suspended for the past five days because they had raised a voice for Umar.

The K-Electric, through a Public Relations firm, issued a press release on Monday, stating that “on humanitarian grounds, KE has already expressed its wishes to extend all possible support for the child’s medical treatment/ post-treatment rehabilitation and education”.

The press release adds that the power utility company has also initiated dialogue with a reputable to review the case to implant artificial limbs, but a positive response to KE’s offer was still awaited from the family.

With regard to the family’s response, the assistant commissioner’s report states that the KE had offered Rs350,000 to the family “as donations” through intermediaries but no KE official had directly contacted the family.

The victim’s father, Muhammad Arif, told The Express Tribune on Monday that a KE official, who identified himself as Ali, had contacted him via phone a couple of times and had made vague offers but no one had come to meet him in person or showed any seriousness with regard to the child’s treatment.

Besides, the KE also repeated its earlier claims that the “incident was a consequence of the pervasive kunda wires to extract power through illegal infrastructure by some other elements where this unfortunate incident took place and the innocent child got injured”.