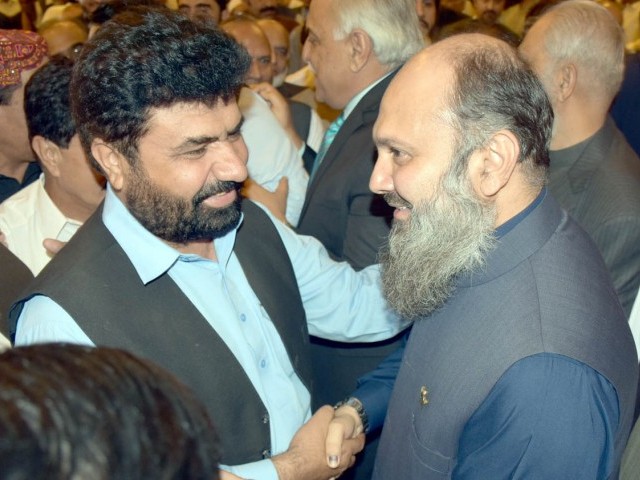 QUETTA: New Balochistan Chief Minister Jam Kamal Khan has congratulated the people of the province on the occasion of Eidul Azha, stressing them to adopt patience and tolerance in line with the Sunnah of Prophet Ibrahim (AS).
“The challenges Balochistan has been facing currently can be addressed if we adopt patience and tolerance and increase the courage of sacrifice as Hazrat Ibrahim (AS) did on the will of Allah Almighty,” said Chief Minister Kamal in a statement issued from the CM House on Tuesday.

He placed special emphasis on helping the poor and needy people of the society.
Pakistan will celebrate Eidul Azha on Wednesday (today).
The chief minister said, “We should not forget the sacrifices rendered by the armed forces and civilians for the country on Eid. We all have to remember our martyrs in our prayers because they rendered their lives for the safety of our society.”
Kamal prayed for the prosperity and development of Balochistan and Pakistan, saying the Sunnah of Prophet Ibrahim (AS) teaches patience and courage as the only solution to end uncertainty.
Meeting with Suri
In a meeting with National Assembly Deputy Speaker Qasim Suri at the CM Secretariat, Kamal said that development of Quetta was his government’s top priority.

“My predecessors did not pay much attention towards the provincial capital.
Though they introduced various lavish development projects for which huge funds were released, the city depicts a dilapidated image,” he told Suri.
Kamal discussed burgeoning issues of Quetta with Suri, who was elected as an MNA from Quetta.
He said, “The next government will totally focus on development of urban areas of the province. Quetta faces several problems, including shortage of clean water and traffic problems.

“We have a vision of turning the capital into a model city by expanding its roads, planting more trees and garnishing the city.”
Endorsing the chief minister’s vision, Deputy Speaker Suri said, “Quetta is my home city and I will utilise my utmost efforts in developing it.
“The PTI has pledged full support for the Balochistan government. By sitting in Islamabad I have more responsibilities towards my people who elected me as their representative at the Centre.”
Cabinet announcement after Eid
Separately, Kamal said the names of his six-member cabinet will be announced after Eidul Azha holidays.

However, sources revealed the BAP’s Pashtun members have demanded of the chief minister to allot four of them important ministries. They have threatened to boycott the coalition government if their demands are not met. “We have to answer to our people,” sources quoted them as saying.
The coalition government of six political parties – PTI, ANP, BNP-A, HDP, JWP with BAP as their head – is striving hard to secure ministries of their choice.
The current political machination could create problems for Chief Minister Kamal, who is eager to resolve the long-standing issues of the province, like backwardness, unemployment, terrorism, lack of educational institutions, clean water among others.
Kamal has commenced consultations with the coalition political parties to form his six-member cabinet after Eid. And in the next phase, the elected members will be awarded posts of advisers.
Sources said the chief minister would not select any non-elected members as advisers as per a decision taken earlier.