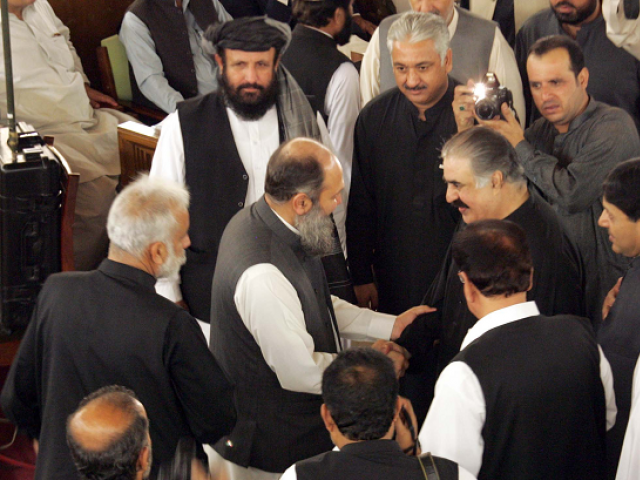 QUETTA: Amid greetings and well wishes, the new members of the provincial assembly (MPAs) reposed complete trust in newly-elected Chief Minister of Balochistan Jam Kamal Khan, saying he will utilise all available resources at his disposal to effectively tackle myriad issues plaguing the province.

The support for the new chief minister was shown during the Balochistan Assembly session chaired by Speaker Abdul Quddus Bizenjo on Saturday.

The MPAs congratulated Kamal on his election. Kamal was elected as the new chief minister of Balochistan after he secured 39 votes against BNP-M and MMA’s joint candidate Younus Aziz Zehri, who managed to obtain 20 votes.

“Being the leader of Balochistan, Kamal should move forward after taking into confidence all coalition and opposition parties because he has to represent the entire province instead of those parties that voted in his favour,” said Zehri while addressing the session.

Zehri said purging corruption from Balochistan should be the top priority of the new chief minister, showing optimism that the new CM would restore peace in the violence-stricken province.

Awami National Party (ANP) Balochistan President Asghar Khan Achakzai said, “The newly-elected chief minister should adopt those policies which will provide relief to the entire province and its people.

“Though the federal governments deliberately kept the province deprived of all basic facilities, Balochistan’s natural resources, which when tapped, would provide relief to the entire province.”
Achakzai urged Kamal to implement promises regarding the China-Pakistan Economic Corridor (CPEC) made by the government to the people of Balochistan.

Addressing the house, BNP-M legislator Sanaullah Baloch lamented corruption taking place in the education department, saying unfortunately 86% people of Balochistan were living below the poverty line, 2.5 million children were out of schools and 82% people had no access to drinking water.

“The bureaucracy must be held responsible for not paying attention to the problems of Balochistan,” said Sana. “Despite the fact that the provincial government has been releasing Rs120 billion annually for the education sector, it has reached the edge of destruction due to corruption.”

Citing the six points of BNP-M chief Muhammad Akhtar Mengal for the development of the province, Sana said, “Our party has pledged full cooperation with the central and provincial governments on the condition that the six points will be implemented.

“Our province has been receiving merely 600 megawatts of electricity from the national grid which annoys us because we cannot install industries in Gwadar and Hub without appropriate power supply.”

On Panjgur-cum-Gachak-cum-Awaran Highway, BNP-Awami’s Asad Baloch said, “The new provincial government must complete the project which will reduce the travelling distance and the journey to Iran from Panjgur will also shorten making it a five-hour trip.

On Asad’s speech, Speaker Bizenjo said, “A feasibility report on Panjgur-cum-Gachak-cum-Awaran Highway is under way and Rs1.5 billion had been already allocated by the previous government for the project. We are assure the next government will proceed with the project.”

Showing optimism over Kamal being elected as the CM, Hazara Democratic Party Chairman Abdul Khaliq Hazara said, “Restoring peace in Balochistan should be the top priority of Kamal as hundreds of innocent people have been brutally murdered in Quetta.

“Instead of healing our wounds, the previous government offered us tissue papers to wipe our tears over killing of innocent Hazara people. The next government must ensure protection of all the people living in Balochistan.”

“We want to show the world that Muslim countries will not tolerate attempts to dishonour our Prophet. The West is deliberately hurting Muslim sentiments which could lead to World War III,” said Sikandar while tabling the resolution.

Women are no less than anyone in talent, says Bharucha