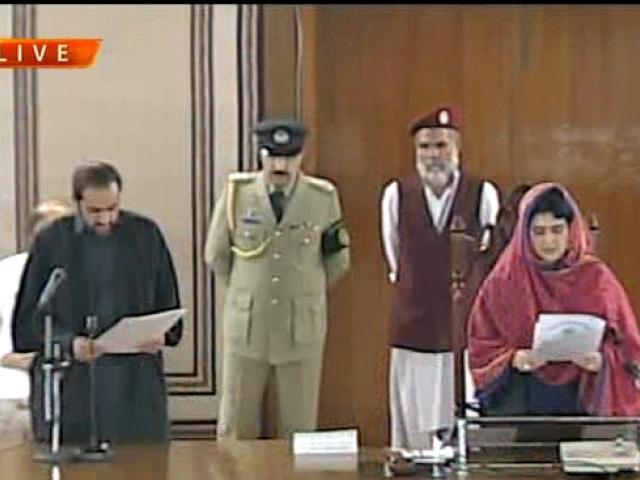 The opposition parties, comprising the Balochistan National Party-Mengal (BNP-M) and the Muttahida Majlis-e-Amal (MMA), tasted defeat in the speaker’s election as their candidate Muhammad Nawaz Khan received only 20 votes.

The same trend was witnessed in the election for deputy speaker as Pakistan Tehreek-e-Insaf (PTI) candidate Babar Musakhel bagged the seat with 38 votes against BNP-M and MMA’s joint candidate Ahmad Nawaz, who managed to secure 21 votes.

The session was presided over by Speaker Rahila Hameed Khan Durrani. She administered the oath to the newly-elected speaker and deputy.

After having bagged the speaker and deputy speaker’s slots, BAP and PTI are confident that their nominee for the chief minister’s slot Jam Kamal would win the election scheduled to be held on August 17.

On being elected, Bizenjo said, “The party nominated me because they found me competent.”
He announced that he would donate five months’ salary to the chief justice’s dam fund.

Bizenjo wished to work with the BNP-M and the MMA for the welfare of Balochistan. He was of the view that working jointly would enable the provincial government to represent the province in a better way in front of the federal government.

Bizenjo was elected chief minister of Balochistan on January 13, 2018 after Pakistan Muslim League-Nawaz’s Sanaullah Zehri had to vacate the post in the wake of a no-confidence motion tabled against him in the BA.

As CM, Bizenjo took special interest in maintaining law and order by announcing special incentives for the police force, increasing the number of development projects in the province as well as boosting the pace of work being carried out on the existing ones, spreading awareness about proper healthcare and addressing problems of the people through conducting weekly open courts.