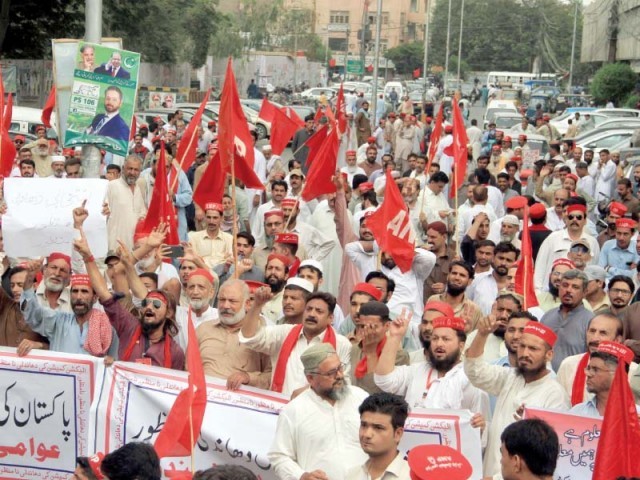 KARACHI: The Awami National Party (ANP) held a protest on Monday outside the Karachi Press Club against ‘massive’ rigging in the general elections on July 25.

ANP Sindh President Shahi Syed outright rejected the election results. He said that the people of his party were labeled as traitors and lamented that the entire Pakhutun leadership was systematically thrown out of the assemblies through the polling process. He said that the credibility of the state institutions was tarnished while the country’s foundations were dented.

“Our polling agents were detained throughout the night of the elections” he alleged, adding that ANP never practiced the policy of chanting slogans against state institutions. He said that the public sentiment was greatly hurt as a result of meddling and that it was deplorable to see that the charge of the state was given in the hands of those who had been cursing the Parliament and remained busy in fooling the public.

He called for investigations into the counting process. “Why did the ECP [Election Commission of Pakistan] fail to finalise the count of votes which were only in hundreds?” he asked, saying that those who could not even count a few hundred votes could not be given the power to conduct elections.

He said this was not the first time ANP had been sidelined in the elections, but the way rigging has taken place in the recent polls was ‘plain horrible’.

The July 25 elections have created significant political unrest, he said, adding that elements that remain hidden should realise that their actions will be exposed no matter how powerful they are.

The 2018 elections, he said, will be remembered as a disgrace to the country since it was through these elections that the Pakthun mandate was systematically kicked out of the Parliament. “Those who would take suo motu actions on wine bottles should also look into what was staged on July 25.”

“Why were our women polling agents detained through the night of the polls? Form 45 was not given at a single polling station,” he alleged, saying that like others, polling agents of ANP were kicked out during the counting of votes.

At the time of counting, only the polling agents of the winning party were allowed inside the polling stations, he said, adding that those who waited for hours in queues to cast their votes found their ballot papers thrown in garbage dumps.

The ANP Sindh general secretary also addressed the rally and said that the party leadership had been expressing its reservations even before the elections.

“We kept demanding that security personnel were to be kept out of the polling booths but no one paid heed,” he said, adding that the party reject the election results and demanded that the authorities conduct the elections again in a fair and transparent manner.

“The nation will soon witness the fate of the puppet government. Why did they hold elections if they were to stage such spectacles?” he questioned.

ANP supporters chanted slogans against election meddling during his address.