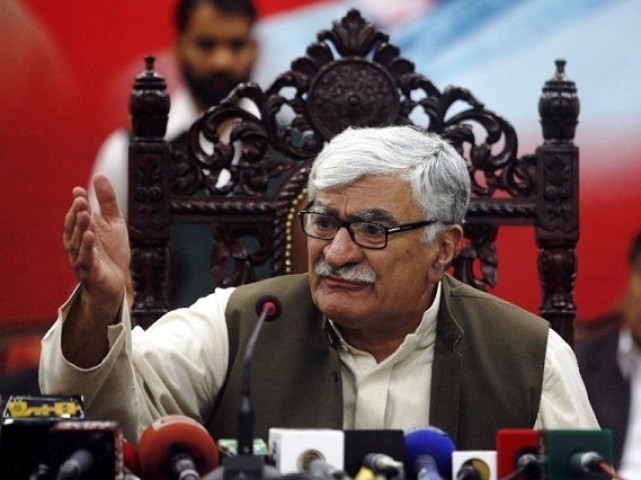 The ANP also announced that they will stick to the joint strategy devised by the all parties conference (APC) called by the Pakistan Muslim league-Nawaz and Muttahida Majlis-e-Amal.

After the meeting, the ANP chief Asfandyar Wali Khan with senior leaders held a press conference and announced that it “totally rejects the results” and demands for “fair and free re-elections”.

They also assured that as followers of Bacha Khan philosophy they will not resort to violence and will keep the protest as peaceful as possible.

“They want to keep Pakhtun leadership out of parliament so that there may be no one to criticise the puppet government,” alleged the party chief.

Lamenting over the poll results obtained by bigwigs such as Maulana Fazlur Rahman, Mehmood Khan Achakzai, and Aftab Ahmad Khan Sherpao, Wali alleged that “the target was not just the ANP but Pakhtuns.”

The ANP chief warned that the way elections were conducted would never result stable and prosperous Pakistan.

Wali added that everyone knew that way is being cleared for a puppet party before elections, but ANP did not know they will go to such extent and commit such an “open election rigging.”

“The polling agents were expelled from the polling stations after voting time for hours during which they filled all the ballot boxes,” Wali alleged.

He revealed that the voters were told until they removed their party bags, party flags and red caps they will not be allowed to go near the polling stations.

He also questioned the delay in results announcement, saying the results of far-flung areas of the country have been received, but results of polling stations in Peshawar valley could not be released even after 30 hours of the Election Day.

The ANP leader alleged that thousands of his party workers, who were wearing red caps, were not allowed to enter the polling station to cast their votes.

He added that his party will participate in APC and will make the next course of action after the joint decision taken in conference.

He said, it is not just the fight of ANP or JUI-F, but the fight of all the political parties and therefore, a joint strategy must be devised.

Wali also thanked all the party workers and voters who despite threats alerts issued by the interior minister to the ANP came out in huge numbers on the polling day.