Mengal says amount will be spent on the people of Gwadar and Lasbel­a
By Our Correspondent
Published: July 22, 2018
Tweet Email 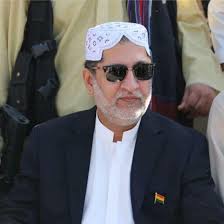 QUETTA: Balochistan National Party-Mengal (BNP-M) chief Akhtar Jan Mengal has proposed imposing 15 per cent tax on investment in Gwadar and spending it on the welfare of the people of Gwadar and Lasbela, saying the China-Pakistan Economic Corridor (CPEC) holds no beneficial plans for Balochistan.

“The prime vision of our politics is Balochistan. People are now well aware of the root causes of their deprivation,” said the BNP-M chief while addressing a corner meeting in the Goth Ismaelani area of Bela on Saturday.

Mengal said, “Our province has such a soil that people from the outside are making billions from it, but sons of the soil are deprived of even basic rights, including drinking water and food.”

On politics in Balochistan, Mengal said, “I had commenced my political career from Bela where I contested elections for the first time and received unimaginable love and respect from the people.

“I have been pursuing the political vision of my father as he always stood for the rights of Balochistan. We can’t compromise our conscience for timely benefits.”

Mengal said, “Lasbela remained famous for politics since 1947 and people here witnessed many leaders. There was a time of NAP when people were being treated equally as jobs were given to them without discrimination.

“July 25 is the day to decide your next five years for which we have to choose a leadership with a colossal vision and development programme for the people of Lasbela and Gwadar.”
The BNP chief vowed to represent the people of the whole province if elected to power.