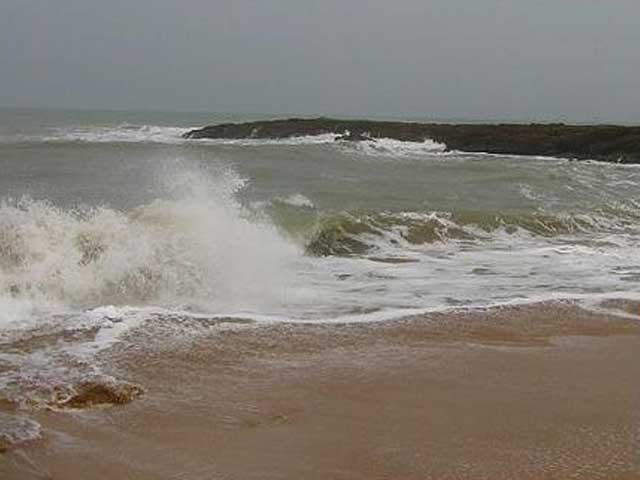 KARACHI: Four women drowned while picnicking at Gadani beach on Friday while rescuers are searching for another two children who are missing and presumed dead in the Arabian Sea.

Two families were on an outing at Gadani beach when a woman, her daughter and two sons, and another two women were sucked into the deep sea by a high tide.

Rescuers fished out the bodies of four women, while the search for the two boys was ongoing when this report was filed.

The tragedy took place around 12:20 pm when the families, belonging to Karachi’s Lyari area, were picnicking at Gadani beach — one of the most dangerous beaches of the country.

“The women and their children were sitting dangerously close to the sea which was in high tide at the time,” police official Ataullah told The Express Tribune. “Suddenly, they were sucked into the deep sea by a mighty wave.”

On eve of Eid: Five drown in Pindi’s river of trash

He added that they stop picnickers from venturing into the sea at high tide. “However, it is not possible for a small police force to keep an eye on all picnickers,” said Ataullah.

“Usually, the government imposes a ban on swimming in the sea during the monsoon season and on holidays, but this time, we have not received any notification about the imposition of Section 144,” he added.

At least three lifeguards were present at the beach when the tragedy was unfolding. They responded well on time but could not fight the rough waters. “It is difficult to rescue someone especially when the sea is in high tide,” diver Islamuddin told The Express Tribune. “We would have been risking our own lives if we went into the rough sea to rescue others.”

The victims have been identified as 35-year-old Shahida, her daughter Mehak, 12, Sadaf, 21, Humaira, 28, while the two missing children are nine-year-old Aman, and 11-year-old Sufiyan.

“They were sitting on the beach when a monstrous wave sucked them into the deep sea,” said Muhammad Shahid, who lost his wife, daughter, and two sons in the tragedy.

A senior official at the Edhi Foundation, Anwar Kazmi advised people to avoid going to beaches from June to August because the sea is rough during these months. “Gadani is one of the most dangerous beaches where several such incidents have occurred in the past,” he added.

Pakistan Peoples Party Chairperson Bilawal Bhutto Zardari expressed shock and grief over the tragedy. He directed his party’s leaders in Lyari to visit the bereaved families and provide them with every possible help.

The provincial police chief, Amjad Javed Saleemi, took notice of the incident and directed his force to device a mechanism at the police station-level to avoid such tragedies. “The police must ensure implementation of Section 144 at the beaches and spread awareness among the people,” he said.