Maj Gen Asif Ghafoo­r says army will fulfil­l role it has been enshri­ned under the Consti­tution­
By News Desk
Published: June 4, 2018
Tweet Email 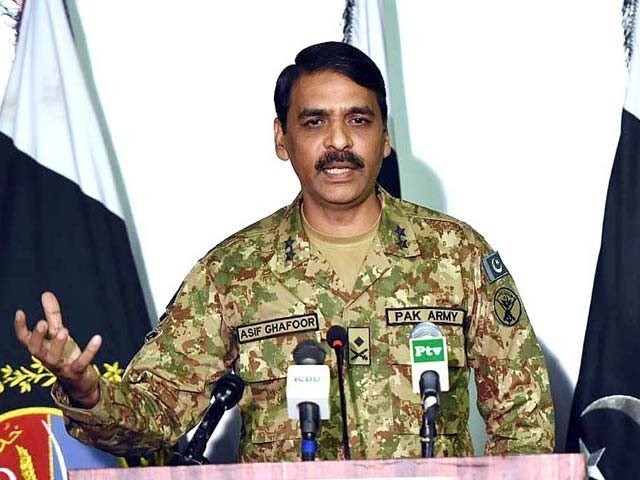 While claiming that all allegations about the security establishment’s alleged involvement in politics are proving wrong, the army on Monday cautioned against dragging the institution into politics ahead of parliamentary elections.

Addressing a press conference in Rawalpindi, Maj Gen Asif Ghafoor, the Inter-Services Public Relations (ISPR) Director General, said the army is happy that the government has completed its five-year term.

“We would like to congratulate the government and parliament for this feat,” he said, brushing aside the speculations that the army is behind any political engineering ahead of the elections.

“First there were speculations that the Senate elections might not take place, and then there were rumours that the government would not complete its term and even there was talk of delay in the elections. With time every allegation against the army proved wrong,” he claimed.

When his attention was drawn towards the statement of former prime minister Nawaz Sharif that his party’s real contest is with the ‘khalai makhlooq’ a derogatory epithet for the security establishment, Maj Gen Ghafoor said he would not comment on political statements.

“This is an election year and a year of change so lots of these statements should be seen in that context,” he said, but added the army must not be dragged into political issues

When asked about the timely holding of elections, the ISPR chief said it is the prerogative of the Election Commission of Pakistan (ECP). “But the army will extend its support when and where it will be requisitioned for election duties in line with its constitutional role,” he said.

For the first time, the DG ISPR spoke on the censorship on media reportedly at the behest of security establishment. He said he maintained contacts with media owners and all the journalists. He said the army had never tried to dictate any media group or journalist to report according to their wishes.

He expressed his gratitude to the local media, which, he said, often reports keeping in mind the country’s larger interest. However, Maj Gen Ghafoor raised serious questions over the use of social media to propagate certain message against Pakistan and its institutions.

He showed a chart featuring how certain individuals re-tweet anti-Pakistan content. Interestingly, the list includes certain political figures, whose identities were not shared, and some media personalities.

Names of some journalists on the chart drew strong reaction on social media with some calling it an open threat to those who do not subscribe to the views of security establishment.

The DG ISPR said both Pakistan and India have to show positivity and decide where the two sides would have to go from here. “There is no space of war because we both our nuclear powers,” he added.

He said India has continued its ceasefire violations despite an understanding reached between the directors general military operations (DGMOs) of the two countries on May 29 to restore the ceasefire of 2003.

“We showed restraint as we are ready to give time to Indian side to respect the ceasefire,” he said, adding that Pakistan never responded to the fire targeting the military post but had to give a reply when Indians targeted the civilians.

He said during the last few years there were causalities on both sides of the Line of Control (LoC) and the Working Boundary due to repeated ceasefire violations by India.

Such ceasefire violations would not serve the purpose of either country, he said, while making clear that Pakistan’s desire for peace should not be construed as its weakness.

When asked about the prospects of resumption of talks, he said Pakistan has never shied away from negotiations, but it is India which has never reciprocated the gesture.

On the recent visit of Afghan delegation, the chief military spokesperson said talks between a delegation led by Afghan National Security Adviser (NSA) Haneef Atmar and Pakistani civil and military authorities were very positive and constructive.

He said there is complete understanding between the two sides that Pakistan and Afghanistan are indispensable for each other. No country is more interested in peace and stability in Afghanistan than Pakistan, he added.

He also went on to say that Pakistan wanted that the US-led foreign forces must leave Afghanistan with a notion of victory and not a defeat.

The DG ISPR also for the first time spoke in detail on the Pashthun Tahafuz Movement (PTM) and how it was now being exploited by forces inimical to Pakistan.

“I met Manzoor Pashteen and Mohsin Dawar on the request of some tribal journalists and they told me about issues in Waziristan like check posts, missing persons and unexploded ordnance,” he said.

He said all of those issues were practical and he helped them connect with senior army officials who listened to them sympathetically and most of their demands were accepted.

“Mohsin Dawar even texted me and thanked for the facilitation. But when the issues were resolved, how did Manzoor Mehsud became Manzoor Pashteen? How did this campaign start on social media, and how 5,000 social media accounts were set up in a single day in Afghanistan?” he asked.

“We now have ample evidence that they are being used by foreign elements and we are being compelled to use force, though we don’t want that,” he said.

He also rejected allegations of the PTM that the security forces in Wana opened fire on them, killing an 8-year-old girl. He said the PTM members and Amman Committee had a scuffle during a jirga in which they opened fire on each other.

“It is on record that security forces helped defuse the situation. All the injured were taken on an army helicopter to hospitals. The army has no problem if they want to chant slogans against it or bash it,” he added.

He disclosed that army chief General Qamar Javed Bajwa directed authorities not to arrest or use forces against the PTM activists during their protest in Lahore after initial reports of their detention.

According to Maj Gen Ghafoor, the army chief said the PTM activists are also Pakistanis and the state must listen to them if their demands are genuine and within the constitutional framework. “If the state won’t listen, then who else will? Ghafoor quoted Gen Bajwa as saying.

He, however, warned that the state will be compelled to act if Pakistan’s interests come under threat.

Talking with reference to the recent book ‘Spy Chronicles’ jointly authored by former chief of Inter-Services Intelligence (ISI) Gen Asad Durrani and former chief of India’s Research and Analysis Wing (RAW) AS Dulat, the DG ISPR said an inquiry has already been launched and its result will be made public soon.

He said the army will never compromise when it comes to discipline. “Wearing uniform does not mean you are an angel,” he said, adding that even people in uniform commit mistakes.

He said the army will never forgive anyone whether he is a solider or a general for violating the discipline. “Gen Durrani would not have faced such a situation had he sought a no-objection certificate from the army,” he added.