Sindh's transport projects are on the road to nowhere

Sindh's transport projects are on the road to nowhere 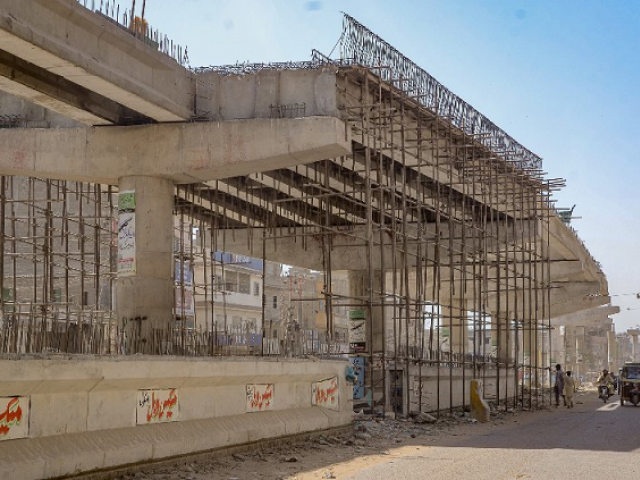 KARACHI: The Pakistan Peoples Party (PPP)-led Sindh government gets full marks for its ambition to set up a perfect transport system, which it has dutifully reflected in each year’s budget during its two consecutive terms in the province.

But when it comes to actual implementation, the government has failed miserably. A number of transport projects in the province are still nothing more than words on paper. Without having seen the light of day, these projects are mentioned in each year’s budget while some of the projects listed in the previous budget with no progress are removed.

The PPP has long-desired to set up the best intercity transport model in the province but it has failed to deliver. It all started with the Shaheed Mohtarma Benazir Bhutto Diesel Buses project, which was first introduced in the Sindh government’s Annual Development Programme (ADP) of 2011-12.

After glorifying the programme as a common man’s project for four consecutive years in the budget documents, the Sindh government wiped it out in the 2015-16 fiscal year without any explanation. The buses were supposed to connect major urban centres of upper and lower Sindh to Karachi.

Instead, the Larkana Intercity Project, including 25 diesel buses, was mentioned in the 2015-16 ADP as an unapproved project. The government earmarked Rs100 million for 50 diesel buses for the project and set a target date of June, 2016, subject to approval.

In the ADP of 2016-17, its completion date was extended till June, 2017 and Rs250 million was allocated for it. An official of the Sindh transport department said that this particular project is currently with the planning and development department for the procurement of the buses.

In the same ADP, the 60 Intercity Bus Project for Karachi was also announced as an unapproved project. All these proposals, like so many others remained on paper. Earlier, their date of completion was June, 2017 which was extended to June, 2018 in last year’s ADP.

One of the PPP’s main goals since it came into power after General Pervez Musharraf’s regime has been to establish a drivers’ training school. For this purpose, it introduced the Rehabilitation of Drivers’ Training School scheme under public-private partnership mode in Karachi, Hyderabad, Sukkur and Larkana. This particular scheme has been a regular feature in Sindh’s ADP since 2009-10.

The school building exists in Karachi’s SITE. An official of the transport department, requesting anonymity, told The Express Tribune that the Motorway Police showed interest in the project a few years ago and submitted a proposal, which the Sindh government rejected.

Since 2011, the Sindh government wanted to construct bus terminals throughout the province, but has failed to do so for reasons unknown. Initially, the Construction of Bus Terminals in Thatta, Badin and Kamber-Shahdadkot at Miro Khan project was reflected in the ADP of 2011-12 as an unapproved project with a target date of completion by June, 2012.

It was in the 2016-17 budget, when the Sindh government felt the need to upgrade traffic signals in big cities of the province. Hence, the project, Upgradation of Traffic Signals in Karachi, Hyderabad, Sukkur, Larkana and Mirpurkhas, featured in the ADP as an unapproved project with a target date of completion as June, 2017. However, in the ADP of 2017-18, the project was featured once again.

32 new buses to run on Sharae Faisal next month

While the Bus Rapid Transit (BRT) lines are operational in other big cities of the country, the port city is still crying for a mega transport project. The infrastructure of the federal government funded Green Line is expected to be completed by May from Surjani Town till Guru Mandir, which is 17.8 kilometres-long.

However, the provincial government funded Orange Line BRT – also known as the Edhi Line – which is only 3.9km-long from Town Municipal Administration Office in Orangi Town till Matric Board Office intersection is not expected to be completed anytime soon. This project was first reflected in the ADP of 2014-15 and was supposed to be completed by June, 2017. In last year’s ADP its targeted date of completion was June, 2018.

The Red Line BRTS from Safoora Chowrangi to Tower stretched over 31km and was first reflected in the ADP of 2015-16. At the time it was 85% funded by a Chinese loan and 15% by the Sindh government.

Things then changed and in the 2016-17 ADP, the government divided the Red Line BRT into three components – detailed design, capacity building and operation and technical assistance through the Asian Development Bank (ADB). “We also have an understanding with the ADB that they will provide support in executing the project,” an official of the Sindh transport department said.

Red Line BRT Project Director Rasheed Mughal told The Express Tribune that the concept design of the BRT has been completed and the detailed design is expected to be finished by October this year. After finalising the project cost, he said that the construction work can be initiated by January, 2019.

According to last year’s ADP, the cost of the Blue Line BRT’s infrastructure from Sohrab Goth till Tower was supposed to be borne by the Sindh government in two parts of Rs7.74 billion and Rs5.16 billion respectively. However, an official said that the entire project has now been moved to the public-private partnership mode, for which tenders have been invited.

For the Yellow Line BRT, the Sindh government has already inked a concession agreement with the China Urban Elected Company under public-private partnership and a financial close is expected soon.

Last year, the shifting of utilities for the Yellow Line BRT was part of the ADP as an unapproved project with a target completion date of June, 2020. However, no work has been initiated on ground yet. Transport Secretary Saeed Awan was not available for comments, despite repeated attempts.

KCR hangs in the balance

The Karachi Circular Railway (KCR) was reflected in the Sindh government’s ADP for 2017-18 after a gap of several years. According to the budget document of the transport and mass transit department, Rs241 million was earmarked for the construction of a fence along the existing alignment of the KCR as an ‘unapproved project’ with a completion date of June, 2020.

Apart from this, the Sindh government was supposed to have its own equity, along with funds from China, for the revival of the KCR. The project has now been included in the China-Pakistan Economic Corridor.