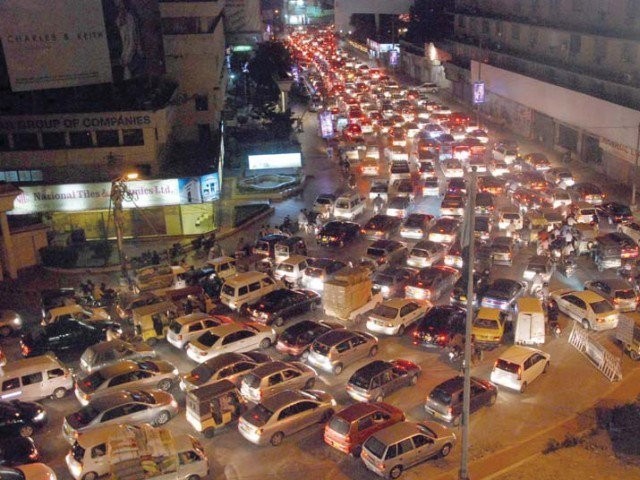 In chaos: Karachi’s citizens get stuck in a traffic jam after every three kilometres on average. The one viable solution for the city is a mass transit system. PHOTO: FILE

KARACHI: The Sindh government is all set to include scores of new mass transit projects in the next financial year, most of which were unapproved or carried forward from last year’s budget.

The Karachi Circular Railway (KCR) will finally be reflected in the Sindh government’s upcoming Annual Development Programme (ADP) 2017-18. According to a budget document of the transport and mass transit department, a copy of which is available with The Express Tribune, Rs241 million has been earmarked for the construction of a boundary fencing along the existing alignment of KCR as an ‘unapproved project’ with a completion date of June 2020.
Apart from this, the Sindh government will have its own equity, along with funds from China, for the revival of the KCR, according to Mass Transit Director-General Muhammad Athar.

Like last year, this year too the government has divided the Red Line Bus Rapid Transit (BRT) into three components, which include detailed design, capacity building and operation and technical assistance through the Asian Development Bank (ADB). “We also have an understanding with ADB that they will provide support in executing the project,” Athar said.

This year, the Blue Line BRT will also be reflected in the Sindh government’s ADP as an unapproved project.

The grand plan was to connect a gated community off the Super Highway to the rest of the city with the Blue Line BRT, which has already been put on the back-burner as private real estate developer Bahria Town, which was willing to construct the BRT, has withdrawn its proposal lying with the Sindh government after three long years of negotiations.

It was the first such project to take concrete shape in the city but it appears that red tape and the Sindh government’s apathy were the main reasons behind the real estate developer’s withdrawal.

In the current ADP, the cost of Blue Line BRT’s infrastructure will be borne by the Sindh government in segment one and segment two, which will cost Rs7.74 billion and Rs5.16 billion respectively. The bus operations and Intelligence Transport System of the Blue Line BRT, Athar said, will be under the public-private partnership mode.

For the Yellow Line BRT, the Sindh government has already inked a concession agreement with the China Urban Elected Company (CUEC) under the public-private partnership mode and the financial close is expected soon, Athar said.

This year, the shifting of utilities for the Yellow Line BRT is part of Sindh government’s ADP as an unapproved project with a target completion date of June, 2020.

The Integrated Intelligence Transportation System (IITS) will also be a part of this year’s budget as an unapproved project. According to Athar, IITS will include a command and control room, real time passenger information system at the BRT stations and an automatic fare collection system.

“The Sindh government will take up all these for the already under-construction Orange and Green Line BRTs,” he said, adding that later, the government would have a provision to include future BRT lines in this system.