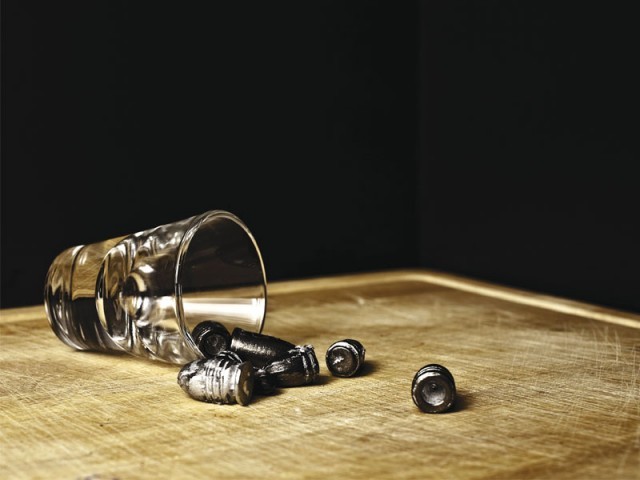 For those who can't afford foreign fare, there's always moonshine.

In the urban centers, consumers have access to legally produced alcohol through bootleggers and wine shops but villagers brew their own alcohol, calling it “kuppi” or “tharra” — the commonly used names for alcohol.

A few months ago, I happened to visit a village on the outskirts of Lahore where I encountered a rural bootlegger and alcohol producer. His house stood in the middle of the fields in a village pre-dominantly inhabited by farmers. He did not have a fancy car, no “drop” points and he didn’t have a variety of alcoholic beverages. He simply sold what he and his wife made in their small kitchen in a distiller.

The distiller was a contraption comprising three pots: the lowest pot served as a water boiler, the middle clay pot had the mixture (he explained the making of the mixture later on), and the top pot was where the cold water condensed the vapours. A pipe running out of one side of the pot was stuck in a bottle where drop by drop the alcohol collected.

“The filling in the first bottle is the strongest,” the bootlegger proudly exclaimed. “So we usually mix it with the rest of the mixture to dilute it.”

I asked him if the rumor that it was combustible was true.

“All you need to do is dip your finger in the first filling, and light it up … and it will catch fire,” he replied.

That sounded scary but this moonshiner seemed to be enjoying telling me the details.

Then a buyer came along, and I took the opportunity to ask him if he knew the hazards of this homemade alcohol.

“It is completely natural so why will there be any side effects?” he asked me. “It is actually goodyou’re your health. The ‘vilaayiti’ (foreign) alcohol is what can make you fall sick.”

After taking Rs300, the moonshiner gave him a transparent plastic bag filled with alcohol. The buyer grabbed it and disappeared.

“How much do you make?” I asked the bootlegger.

Next I was to see the process of making the mixture — the secret recipe actually made me sick to my stomach. We reached a mud house out in the fields with cattle and sheep milling around it. In one corner of the mud house was a pile of cow dung that gave off an unbearable stench. That did not seem to affect the man who had brought me there. He started digging through the dung industriously with his hands. Finally, he took out a clay pot loosely covered with a steel plate that did not really fit. He uncovered it, and dipped his dung-covered hands inside to show that the mixture had not fermented yet.

“What are the ingredients?” I asked.

“The bark of the ‘keekar’ tree, gurrh (brown sugar) and water is all that we need.” He pointed to a canal and told me that the trees on both sides of the canal in this village were of that particular kind.

The bootlegger and his assistant went on to explain that they had no formula for the quantity of each raw material and fermentation was complete when the mixture ‘smelt’ right. Usually, that took two weeks.

It was almost dark when I decided to bid them farewell. Back in the city, I talked to various doctors and toxicologists and concluded that the mixture that I saw in the village could only lead to hygiene issues and gastric illness.

Dr Saleem Azam of the Pakistan Society pointed out that the distance was so huge between the villages and the city, that the middle men took advantage of the travel time to add different poisonous chemicals to the brew to make it stronger. Not just that, but another professor I spoke to with knowledge of toxic substances says that residents of urban areas have access to denatured (undrinkable or poisonous) alcohol, easily available at chemical sellers. According to Dr Mehmood Shaukat of King Edward’s Medical University, ethanol (the chemical name for the above mentioned mixture) is used for industrial purposes and it is denatured by adding poisonous chemicals like methanol before being supplied to the market. The final product is not drinkable alcohol but, according to the professor, many people do in fact drink it. The result is deadly. Most people reported blindness at first and then eventually death.

Cirrhosis [si-roh-sis]: Cirrhosis is a scarring of the liver and poor liver function. Cirrhosis, which is caused by long-term alcohol abuse (and can also be caused by Hepatitis C), is

generally irreversible — and is a serious condition that can lead to many complications including death, and the patient may need a liver transplant.

Delirium Tremens [dih-leer-ee-uhm] [tree-muhnz, -menz]: Delirium tremens is a severe form of alcohol withdrawal. Delirium tremens can occur after a period of heavy alcohol drinking, especially when the person does not eat enough food. Symptoms may get worse rapidly, and can include body tremors, mental status changes, agitation, irritability, confusion, disorientation, decreased attention span, hallucinations and decreased mental status and deep sleep that persists for a day or longer.

Going on a bender: See above.

Hangover [hang-oh-ver]:This is a term for the sensation people feel the morning after they have indulged in excessive drinking. Symptoms include a dry mouth, a headache, a bad stomach, red eyes and tiredness.

Intervention [in-ter-ven-shuhn]: The act of informing an alcoholic that he has a problem and should seek help for his addiction. Trained healthcare professionals and family members are usually involved.

Alcohol withdrawal: Heavy drinkers who quit cold turkey may experience an intense craving for alcohol; they may shake uncontrollably or sweat excessively and may even hallucinate (see Delirium Tremens).

Mummy, daddy and me