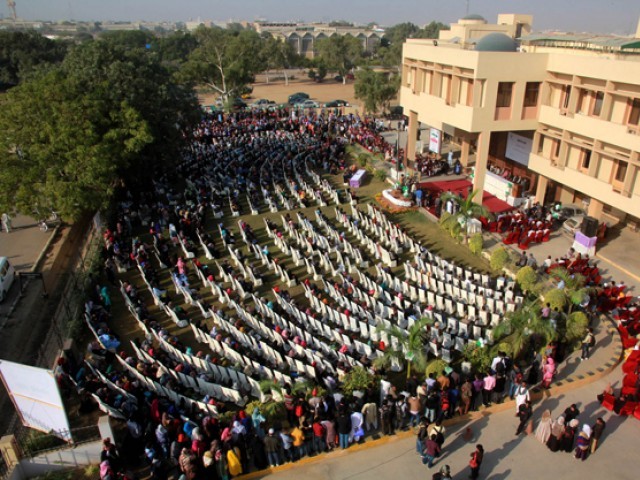 A ceremony was organised at the convocation ground of University of Karachi to celebrate its foundation day. PHOTO: ATHAR KHAN

KARACHI: Hundreds of new entrants to the University of Karachi (KU), most of them accompanied by their parents, had a strange experience on the first day at the varsity’s campus. For them, it was a unique feeling to become part of the procession and other proceedings organised on Thursday to mark the 58th foundation day of the university.

The day is celebrated on January 18. This year, it was celebrated with more zeal than usual as the varsity administration decided to start the new academic session the same day. Newly enrolled students and their parents also participated in the walk. Huffaz, all from the KU faculty, recited the Holy Quran as they, accompanied by KU Vice-Chancellor Dr Muhammad Ajmal Khan, deans of faculties, a large number of KU’s teaching and non-teaching staff and alumni, marked in a procession from the Silver Jubilee Gate to the convocation ground with students showering rose petals on the participants along the route.

A ceremony was organised at the convocation ground of the varsity. Addressing participants, the VC highlighted various feats achieved by the varsity’s faculty and students. KU students have earned fame across the globe, Dr Khan said, adding that KU was also performing well in the field of research. The varsity published several research papers last year, he boasted.

The VC also highlighted the financial crisis being faced by the varsity. He appealed to the Sindh government, Higher Education Commission (HEC) and philanthropists to help overcome KU’s financial crisis. “The biggest university of the metropolis cannot run under such circumstances,” he feared. According to Dr Khan, the financial crisis at the varsity had gotten to such an extent where the administration was struggling to pay salaries to the varsity’s employees. “The gross salaries surpass the total income of the varsity,” Dr Khan lamented.

Dr Khan also commented on reforms in KU’s admission policy. He admitted that earlier the varsity admitted many students due to political parties’ pressure. To avoid intervention from all sorts of foreign elements, the admissions at the varsity had now been completely computerised, the VC said. 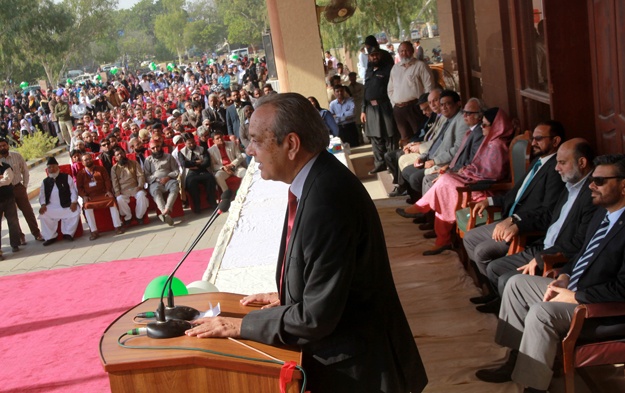 Former president of Karachi University’s Teachers Society Shakeel Farooqui, who conducted the proceedings, informed the gathering about the significance of January 18. According to Farooqui, the varsity had shifted to its current location on January 18, 1960. Earlier it was situated in the old city area in four to five different buildings around 12 kilometres away from its present location.

The VC at that time, Dr Bashir Ahmed Hashmi, organised a procession, at which, under the supervision of Maulana Ehtishamul Haq Thanvi, 30 huffaz recited Holy Quran from the Silver Jubilee Gate to the old convocation ground, where the new administrative block stands today, Farooqi said, adding that the tradition had been continued over the years.

Ejaz Ahmed Farooqui, the president of Unikarians, KU old boys association, announced that the Unikarians will undertake the construction of a new building in the chemistry department. He called upon former students to play their role in helping the university in its financial crisis.

A former VC, Dr Zafar Saeed Saifi, recalled the old times when the campus was relocated to the present site. When there were no roads, no houses. The area wore a deserted look then. He also recalled the great contribution made by former VCs such as Dr Hashmi and Dr Ishtiaq Hussain Qureshi in the development and promotion of the university to its present shape and strength.