Five-storey buildi­ng was locate­d in the old city area around the Delhi Gate
By Muhammad Shahzad
Published: January 6, 2018
Tweet Email 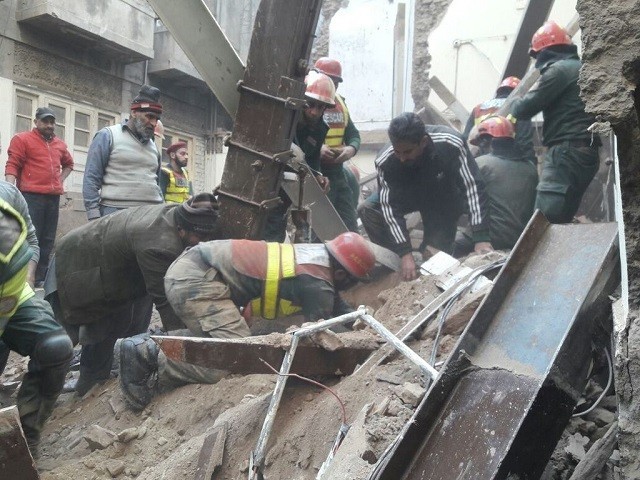 LAHORE: Five members of a family are trapped under the debris of a five-storey building which collapsed in the Chota area of Delhi Gate in Lahore on Saturday morning.

“There’s no confirmation about the number of victims trapped under the rubble,” District Coordination Officer (DCO) Sameer Ahmad said while talking to the media.

“Rescue teams are using the latest technology and live locators to identify the victims trapped inside, and have evacuated one person so far,” he added.

Five members of a family, a couple and their three children, were sleeping on the ground floor of the building when the incident took place.

The victims were identified as Ghulam Abbas, his wife Marium, and their sons Ali, Haider and Sabih Hassan.

Sabih Hassan, the minor victim, has been recovered and is reportedly alive and well at the hospital.

According to reports, some children on their way to school and other by-standers present near the building when it collapsed could also be hurt in the incident.

The building was situated inside old city, which is an extremely congested area. A majority of houses there were constructed decades ago, and are in dilapidated condition today.

Teams of helpers are facing problems in conducting rescue operations due to the narrow streets, eye-witnesses say.

The incident has created panic in the locality, and a large number of residents have gathered around the collapsed debris. A contingent of police officials is present to maintain the law and order situation of the area.

“I was busy in my morning routine when I was shocked with a deafening sound. Looking around, there were screams and clouds of dust everywhere. A minor victim crying for help,” Omar, who runs a general store nearby, told reporters.