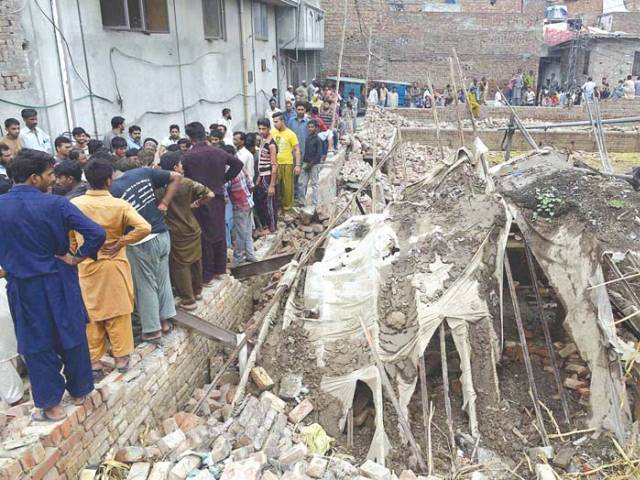 The buildings destroyed by the rain. PHOTOS: EXPRESS

LAHORE: As many as five people, including three children, were killed and eight others were injured in roof collapse incidents across the City following heavy rain ealy on Sunday.

A Rescue 1122 spokesman said Orange Line Metro Train workers were asleep in a rented building on Wahdat Road when the roof collapsed on them. The spokesman said the incident was reported at 5am.

“We took the injured to a hospital. Two people were declared dead on arrival,” he said.

Separately, three children were killed and another was injured when a wall collapsed on them in Jubilee Town.

A police spokesman said Umar, Afaq and two other children, all under the age of 10 years, were playing in their neighbourhood when the wall of a cattle house collapsed on them around 9 am.

He said the children were caught under the debris. He said hearing their screams, some neighbours gathered at the spot and started rescue work. He said they also called Rescue 1122. He said a Rescue 1122 team removed the debris and pulled out the children from under it. They were taken to a hospital, where three children were declared dead on arrived. The spokesman said an Fir had been registered against the owner of the cattle house on the complaint of the deceased’s parents.

In another incident, 35-year-old Muhammad Yousaf died while his wife Naila and his child were injured when the roof of their house collapsed near Shama Stop.

He said the family was trapped under the debris. Their neighbours called Rescue 1122 who reached at the scene and pulled out the family.

They took them to a hospital where doctors pronounced Muhammad Yousaf dead on arrival.