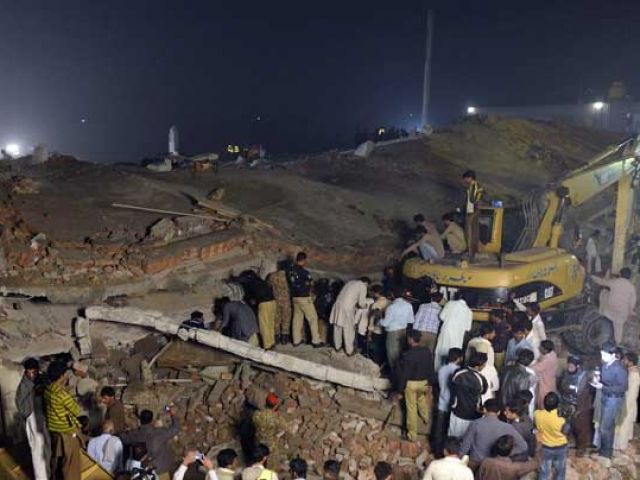 Army soldiers and rescuers search the victims in the rubble of a collapsed factory on the outskirts of Lahore on November 4, 2015. PHOTO: AFP

LAHORE: At least 16 people were killed and 40 injured when a factory roof collapsed in Lahore on Wednesday, with around a hundred more still trapped.

“The rescue workers have so far retrieved 16 dead bodies while at least 40 injured have been taken to hospitals,” Mohammad Usman, the city’s top administration official who was coordinating the response to the disaster, said.

The toll was confirmed by Haider Ashraf, a senior local police official.

The incident took place at a polythene bag factory in the Sundar industrial estate in the city.

Jam Sajjad Hussain, a spokesperson for the rescue services, said 100 people were still trapped, while ambulances were taking the injured to hospital. Rescue workers remove a victim from the rubble of a collapsed factory on the outskirts of Lahore on November 4, 2015. AFP PHOTO

Zaeem Qadri, a spokesperson of the Punjab government told reporters that progress was slow because the factory was at the end of a narrow lane making it difficult for excavators to reach the site.

He added that an emergency has been declared at all local hospitals.

Officials have been summoned from Okara & Qasur. Machinery at the scene is sufficient but it's difficult to operate due to narrow space.

Doctors have been called back and emergency has been imposed in all of Lahore as per CM Punjab’s instructions. #SundarIndustrial

An official of the Edhi foundation told The Express Tribune the cries for help from under the debris could be heard at the site.

Two floors of the building were operational while the third was under construction, the worker added.

DCO Lahore Capt (retired) Muhammad Usman said more than 150 labourers were working in the factory when it caved in.

“Specialised troops along with urban search and rescue teams have been sent on a special plane from Rawalpindi to Lahore, the ISPR said.