Protes­ters torch at least one car and five motorc­ycles on a highwa­y in Islama­bad
By Riazul Haq
Published: November 26, 2017
Tweet Email 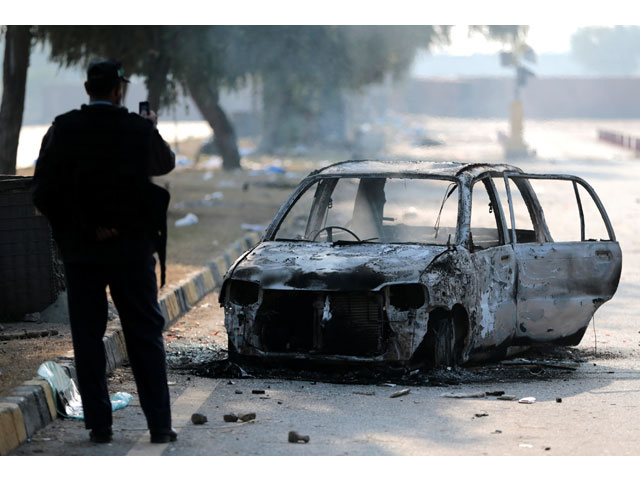 A policeman takes a picture of a car burned during clashes near the Faizabad junction in Islamabad, Pakistan November 26, 2017. PHOTO: REUTERS

ISLAMABAD: Fresh protests and clashes have erupted across the country as religious parties, mainly led by the Tehreek-e-Labbaik, continued to block major arteries and roads in various cities over the police action at Faizabad Interchange.

According to Express News, protesters torched at least one car and five motorcycles on a highway in Islamabad. Consequently, Punjab Rangers backtracked from their check-posts while Islamabad police used tear gas to disperse the mob.

Earlier today, Motorway M1 leading to Islamabad from Peshawar was opened for passengers. Speaking to The Express Tribune, spokesperson for Motorway Mehmood Ali Khokhar said that people from Lahore were unable to enter Islamabad unless they used link roads from Gujar Khan to Balkasar Interchange before taking motorway for the capital.

In Lahore, a security high alert was declared on all routes leading to the residence of deposed prime minister Nawaz Sharif in a bid to obstruct the protesters. Shipping containers have been brought to Ferozpur road.

Most of the private education institutions of Islamabad will remain closed on Monday while the Punjab government has also announced to keep schools shut for the next two days. Punjab’s universities and colleges will only resume once the law and order situation improves. 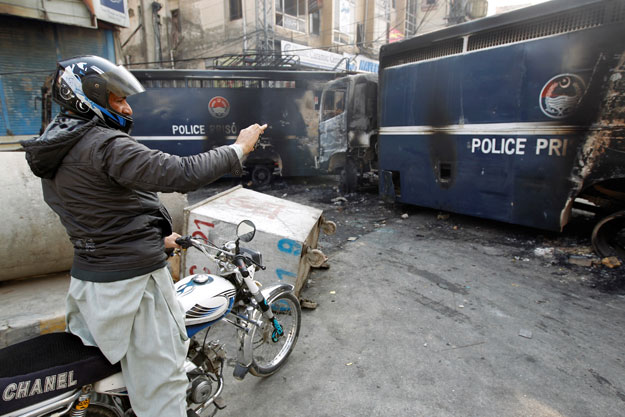 A passerby photographs police prison vans destroyed during clashes with protesters near the Faizabad junction in Islamabad, November 26, 2017. PHOTO: REUTERS

Protesters have been reported at major arteries and bridges in different cities, as follows:

Lahore: Sit-ins have been reported at Shahedreh, Green Town, Hamdard chowk, besides other areas. At Faisal chowk, protesters have cut off connection to the Safe City close-circuit television (CCTV) cameras.

Multan: Metro service is reported to have been closed for a second day because of the demonstrations. Protesters have blocked Ghanta Ghar chowk, Nawa Shehr and Kachheri chowk among other areas. Some petrol pumps have also been forcibly closed.

Sukkur: Protests have caused closure of markets and hotels and staged a demonstration outside the city’s press club. Sarafa bazaar, Mochi bazaar.

Larkana: Protests have been ongoing at Jinnah chowk.

Gujranwala: Protests are being staged in different areas of the city.

Mirpur: Protesters have blocked Mangla Bridge, which links rest of the country to Azad Kashmir.