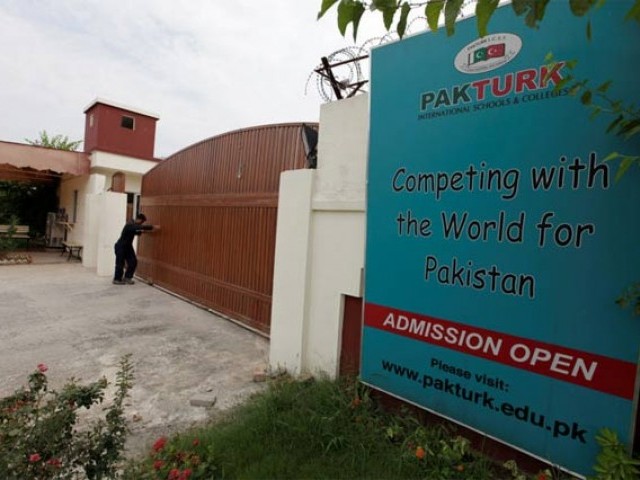 KARACHI: The federal government’s efforts to deport Turkish teachers formerly associated with the Pak-Turk schools chain run by the cleric Fetullah Gullen, as the Sindh High Court (SHC) extended on Wednesday its stay against their deportation.

A two-judge bench, headed by Justice Munib Akhtar, extended till December 5 the restraining order earlier passed on a petition filed by eight Turkish refugee applicants living in the province.

At the outset, the additional attorney-general informed that the federal government did not intend to deport the Turkish nationals or their families.

The judges then told the teachers’ lawyer to present all relevant documents for the petitioners to the court by December 5. They also directed the federal law officer to submit the relevant documents in court before the next hearing.

In the meanwhile, the bench extended its earlier restraining order till the next hearing.

Eight former employees of the Pak-Turk International Schools approached the court last month to avoid being deported after the same happened to their colleague from Lahore.

They alleged that the authorities were still deporting Turkish nationals and their families in violation of the order passed by the high court.

The petitioners mentioned that a former principal of a Pak-Turk school, Mesut Kacmez, and his family were taken away from their residence in Lahore by men in plainclothes on September 27.

Kacmez, his wife, and two young daughters were reportedly taken to an undisclosed location, they said, adding that they were later handed over to Turkish authorities for forcible repatriation.

Directions were also sought for the interior ministry to put the names of all the employees of the Pak-Turk schools on the Exit Control List (ECL) to stop their deportation.

Last December, the deportation issue was taken up in court by a group of parents, students and teachers of the Pak-Turk schools against the deportation of Turkish teaching staff, following a request by the Turkish government.

Turkey had requested Pakistan to close down Pak-Turk schools, alleging that they were run by Gulen, who had been accused of instigating a coup attempt last year.

The interior ministry had in November last year ordered the Turkish staff of the educational network to leave Pakistan, rejecting their applications for visa extensions.

Students and teachers then argued that the Pak-Turk Foundation was a non-profit, non-governmental organisation which had nothing to do with the politics of Pakistan or Turkey. The petitioners submitted that the deportation order would hurt the interests of 11,000 students studying at the schools.

They had informed the court that the Turkish teachers had applied for extensions in their visas, but instead of granting these extensions, the government ordered them to leave the country.

They maintained that the Pak-Turk schools provide inexpensive but high-quality education. “Therefore, the decision to deport the teachers will harm the futures of the students of these schools.”

Junior staff being sent to court instead of officials in Hyderabad