Accuse­r says that Trump had made unwant­ed sexual advanc­es toward her
By AFP
Published: October 17, 2017
Tweet Email 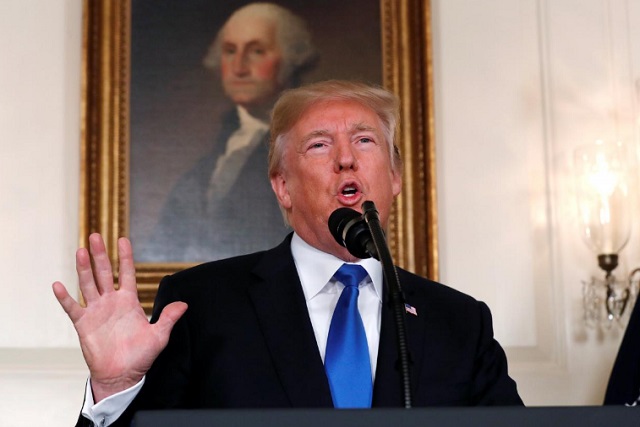 WASHINGTON DC: US President Donald Trump on Monday dubbed all sexual assault allegations against him “fake news” after his campaign was subpoenaed as part of a defamation suit brought by a former reality show contestant.

“All I can say is it’s totally fake news. It’s fake and made-up stuff and it’s disgraceful what happens, but that happens in the world of politics,” he told reporters at the White House.

The lawsuit by Summer Zervos, a former contestant on Trump’s TV show “The Apprentice,” says he made “numerous false, defamatory statements” in response to her allegations that he tried to kiss and grope her without her consent.

The subpoena, which was issued in March but filed September 19, directs the Trump campaign and its affiliates to hand over documents on Zervos and her associates as well as on “any woman alleging that Donald J. Trump touched her inappropriately.”

It also seeks documents on “any accusations” made during Trump’s election campaign that he “subjected any woman to unwanted sexual touching and/or sexually inappropriate behavior,” and on the president’s responses to allegations against him.

Zervos said last year that Trump had made unwanted sexual advances toward her when she met him at the Beverly Hills Hotel in Los Angeles in 2007 to discuss career opportunities.

Trump moved toward her aggressively during the encounter and touched her on the breast but she rebuffed him, she alleged.

Zervos and several other women who made similar allegations came forward after a 2005 videotape of Trump bragging about groping women surfaced in early October.

The president-elect claimed his comments on the tape were “locker-room banter,” and denounced the sex assault allegations as lies and fabricated stories.

According to Zervos’ suit, “Mr Trump became obsessed with calling Ms Zervos and any other woman who came forward to report his abuse liars with improper motives.”

Trump is a “liar and misogynist” who has “debased and denigrated Zervos with false statements about her,” the lawsuit says.