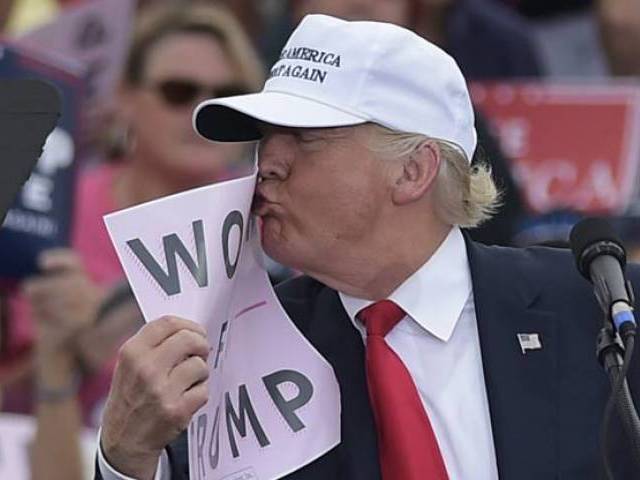 WASHINGTON: Newly published accusations that Donald Trump groped or inappropriately kissed women rocked the race for the White House Wednesday, with the Republican nominee angrily denying the reports and his campaign branding them “character assassination.”

Claims by four women, whose accounts were reported by The New York Times, The Palm Beach Post and Yahoo News, came to light after he said in Sunday’s presidential debate with rival Hillary Clinton that he had never assaulted women.

Trump accuses Bill Clinton of being ‘abusive to women’

Trump’s denial came as he tried to set his campaign back on track after a video recording from 2005 surfaced Friday in which the 70-year-old real estate mogul is heard making lewd boasts about how his celebrity meant he could grope women with impunity.

“When you’re a star, they let you do it. You can do anything… Grab them by the pussy’.”

He added that when he meets beautiful women, “I just start kissing them.” Trump has apologised for the comments, dismissing it as “locker room” banter.

With just 27 days until the November 8 election, and Democrat Clinton in the driver’s seat with national polls in her favour, the embattled Republican nominee had sought to get back on the offensive. But the explosive new allegations of sexual misconduct put Trump’s behaviour with women in the spotlight once again. Former businesswoman Jessica Leeds, 74, who worked for a paper company, told the Times that Trump groped her on a flight in the early 1980s as they sat next to each other in first class. About 45 minutes after takeoff, Trump lifted the armrest and began grabbing her breasts and tried to put his hand up her skirt, Leeds said.

“He was like an octopus,” she told the daily. “His hands were everywhere.” “It was an assault,” she added.

Rachel Crooks said she was a 22-year-old receptionist at a real estate company in Trump Tower in 2005 when she encountered Trump outside an elevator in the building one morning.

She introduced herself and shook his hand, but he would not let go. Trump began kissing her cheeks and then “kissed me directly on the mouth,” she told the Times.

“It was so inappropriate,” Crooks added. “I was so upset that he thought I was so insignificant that he could do that.” “None of this ever took place,” Trump angrily told the Times, calling the reporter a “disgusting human being.”

Also on Wednesday, the Palm Beach Post published an exclusive on its website in which Mindy McGillivray, now 36, alleged that Trump grabbed her at his Mar-A-Lago resort in Florida in early 2003.

“It was pretty close to the center of my butt,” she said of the incident that happened as she was working as a photographer’s assistant at an event. “I was startled. I jumped.” None of the women reported the incidents to law enforcement.

The New York Times and Palm Beach Post spoke with friends and family of the women, who corroborated their accounts and knew of the incidents before the “hot mic” video was released last week.

More sordid allegations came from Miss Washington 2013, Cassandra Searles. Yahoo News reported that she had called Trump a “misogynist” in a Facebook post, and said in a comment that he had “continually grabbed my ass and invited me to his hotel room.”

The Trump campaign quickly fired back, calling the Times article a political attack. “This entire article is fiction, and for the New York Times to launch a completely false, coordinated character assassination against Mr. Trump on a topic like this is dangerous,” senior communicators advisor Jason Miller said in a statement.

“To reach back decades in an attempt to smear Mr. Trump trivialises sexual assault, and it sets a new low for where the media is willing to go in its efforts to determine this election.”

Trump travelled to Florida Wednesday for two rallies, where he ramped up his attacks on the 68-year-old Clinton, calling her a criminal who “has to go to jail” for endangering national security by using a private email account while secretary of state.

He also took aim at Republican leaders, including House Speaker Paul Ryan, who have abandoned him in the wake of the hot mic revelations. But as Trump sought to move on from the devastating 2005 recording, the new allegations landed.

In addition, CBS News published footage Wednesday from an “Entertainment Tonight” Christmas feature in 1992, in which Trump watches a group of young girls going up the escalator in Trump Tower. “I am going to be dating her in 10 years. Can you believe it?” he is heard saying. Trump was 46 at the time.

And Temple Taggart, a former Miss Utah, told the New York Times in May how Trump kissed her on the lips when he introduced himself to the 21-year-old contestant at the 1997 Miss USA pageant. She said he kissed her again at a later meeting at Trump Tower.

Clinton on Wednesday campaigned in Colorado and Nevada, where she ignored questions about the New York Times article shouted by pool reporters.

“America is better than what Donald Trump says and represents,” the former first lady had said earlier in Pueblo, Colorado. But her campaign issued a statement.

“These reports suggest that he lied on the debate stage and that the disgusting behaviour he bragged about in the tape is more than just words.”

Espresso yourself! Japan perks up to ‘sexy’ coffee